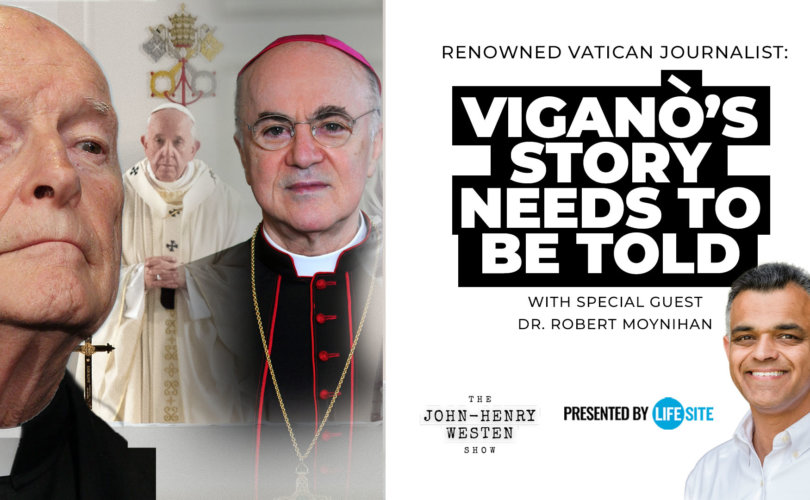 November 10, 2020 (LifeSiteNews) — Dr. Robert Moynihan is one of the most well-respected and widely-known reporters in the Catholic Church. He’s currently the editor-in-chief of Inside the Vatican magazine, and has over 30 years experience in the industry.

He recently published an amazing new book titled, Finding Viganò: In Search of the Man Whose Testimony Shook the Church and the World (TAN Books). LifeSite readers can receive 10% off Dr. Robert Moynihan’s new book by clicking this link and using the code LSN10.

“I felt that his story needs to be told,” Dr. Moynihan told me today on my podcast, referring to Archbishop Viganò. “I’m working on a second [book].”

Dr. Moynihan, who went to Harvard and Yale, is an insider’s insider who knows many clergy and is intimately familiar with Vatican politics. He shared with me a number of revelations not previously known to the outside world.

He told me that when female altar servers were introduced in the Church, then-Cardinal Ratzinger, who was in charge of the Congregation for the Doctrine of the Faith, told him that the issue “hasn’t yet come across my desk.”

Then, the very next day, the Vatican’s Secretary of State office announced that female altar servers were now acceptable. In other words, Ratzinger had not given his approval to it at all!

He also shared with me what happened after Pope Benedict brought in Cardinal Tarcisio Bertone to be his Secretary of State.

Bertone “parachuted in” from northern Italy, Dr. Moynihan said. He had his own views on things.

Dr. Moynihan said Benedict trusted Bertone and gave him control of the Roman Curia and that it was Bertone who orchestrated the removal of Viganò from his role in the Vatican.

Eventually, Pope Benedict sent Vigano, who protested about his removal, a letter saying that he wanted to make him Apostolic Delegate to the United States and that he believed he had a “providential” mission to fulfill in taking on that position.

Dr. Moynihan revealed that when he spoke to Viganò about that appointment, Viganò had come to feel that Benedict was “prophetic” in making that decision, and that he likely didn’t know what the full ramifications of assigning him to the United States would be at the time.

Lastly, Dr. Moynihan stated that when Archbishop Vigano spoke with then-Cardinal Theodore McCarrick, he asked him to listen to Pope Benedict’s order to remain silent and prepare for his judgement in the last years of his life. McCarrick rejected that, he said.

Viganò simply wanted McCarrick to do his penance, Dr. Moynihan told me. “I didn’t want to have a public execution, I wanted him to repent,” Archbishop Viganò told him.

Archboshp Viganò also “shed a tear” while reflecting about McCarrick with Dr. Moynihan. He truly loved and still loves the church, Dr. Moynihan told me.

It’s also available in audio format on platforms such as Spotify, Soundcloud, and ACast. To subscribe to the audio version on various channels, visit our ACast webpage here.