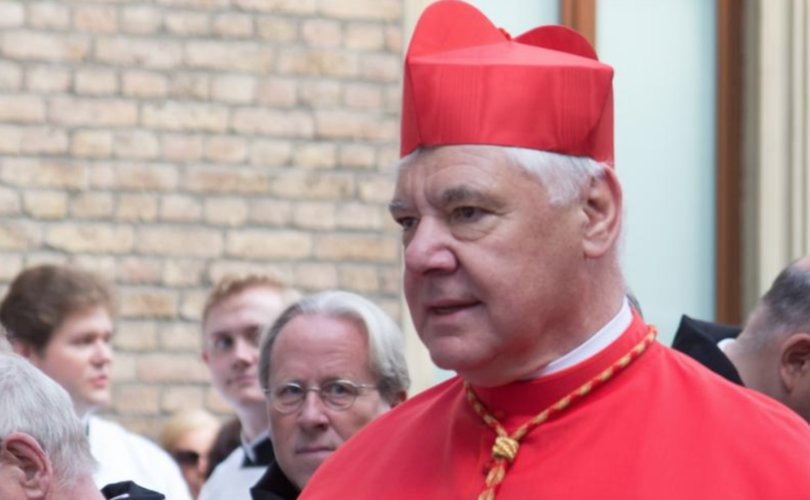 October 24, 2018 (LifeSiteNews) – Two Vatican specialists are reporting today that, according to their sources, the Vatican might well solve the ongoing dispute with the German Jesuit St. Georgen Graduate School of Philosophy and Theology in Frankfurt by allowing Father Ansgar Wucherpfennig to remain its rector in spite of his public defense of homosexuality and female confessors.

Father Arturo Sosa himself, the controversial Superior General of the Jesuit Order, might now be the one to vouch for the orthodoxy of Father Wucherpfennig.

A few weeks ago, German media had made it public that Father Wucherpfennig did not receive the Vatican's “Nihil obstat” (“nothing stands in the way”) after his having been re-elected as the rector of the Jesuit Graduate School in Germany. The Vatican's Congregation for Catholic Education requested that Wucherpfennig recant several statements he had made in a 2016 interview.

In that interview, he had questioned whether the Bible even spoke about homosexuals as they are acknowledged today; and he also proposed that ordained women should be allowed to hear confessions. The Jesuit priest explicitly had referred back to Pope Francis' own lenient comments toward homosexuality which he said inspired him to make those public statements in 2016. Subsequently, many German theologians and even bishops protested against Rome's decision to disallow Wucherpfennig from being the rector of the Jesuit school.

As Dr. Bejamin Leven and Lucas Wiegelmann report for the German Catholic journal Herder Korrespondenz, there now seems to develop a “solution” for this standing conflict.

“According to information which Herder Korrespondenz received from within the Roman Curia, the Vatican is now looking for a compromise,” the authors say, adding that “the Vatican might be willing to give the green light for Wucherpfennig if the Superior General of the Jesuit Order, Arturo Sosa, would vouch for the 'orthodoxy' of Wucherpfennig.”

Sosa himself has an authoritative position as the Great Chancellor of St. Georgen. As such, he therefore names the elected rector, as soon as the Vatican Congregation for Catholic Education first gives its own approval.

Commenting on this probable solution of the conflict with Wucherpfennig, Leven and Lucas Wiegelmann comment: “This would mean de facto that the Curia drops its resistance against Wucherpfennig and that it leaves the solution of this question of personnel up to the leadership of the Jesuit Order.”

“The Holy See seeks de-escalation in this matter,” Herder Korrespondenz adds, “and does not wish to win the struggle with the Graduate School St. Georgen at all cost.” An insider is being quoted by the authors as saying “Rome has anyway lost the race for public sympathy.” Some Churchmen consider this current conflict to be an “unwanted escalation” after an  “unfortunate linkage of circumstances.” According to Vatican sources, the responsible dicasteries “had done nothing else but follow the prescribed procedure as it is put down in the 'norms concerning the declaration of the Nihil obstat.'”

This alleged new development – where the prescribed procedure is being tacitly ignored for the sake of peace – raises the question as to whether these norms will have any importance in the future or whether they simply will also be ignored.

This alleged solution of the Wucherpfennig dispute comes at the end of the Youth Synod during which there was much talk about a more lenient and accepting attitude toward homosexuals. As Cardinal Luis Tagle has just stated at the synod's press conference, he expects the topic of “LGBT” to be included in the synod's final document.

Additionally, Father Sosa who is said to be the guarantor for Wucherpfennig's orthodoxy himself has already made headlines by questioning Catholic teaching concerning marriage and divorce.

In February of 2017, Father Sosa had claimed in an interview that the words of Jesus against divorce are “relative” and must be “discerned” according to the “conscience” of each individual. Sosa questioned the words of the Gospels and said with regard to the teaching of Christ on marriage that “there would have to be a lot of reflection on what Jesus really said. At that time, no one had a recorder to take down his words. What is known is that the words of Jesus must be contextualized, they are expressed in a language, in a specific setting, they are addressed to someone in particular.”

Father Sosa shows himself here to be a doubter of the words of Holy Scripture, just as Father Wucherpfennig has now also done. Therefore, it seems likely that the Jesuit Superior General would testify to Wucherpfennig's own orthodoxy.

As it now seems, Wucherpfennig himself, earlier this summer, was still willing to defend publicly the Church's official teaching on homosexuality and on the exclusivity of the male priesthood. As the authors Leven and Wiegelmann explain it in a longer article written on the same topic for the November issue of Herder Korrespondenz, Wucherpfennig had written in the summer of 2018 to the Vatican (for, both the Congregation for the Doctrine of the Faith and the Congregation for Catholic Education had raised grave objections against his 2016 public interview) and had offered to make a public statement in which he would openly restate the Church's official teaching. However, as Leven and Wiegelmann were able to find out, Wucherpfennig never received an answer from the Vatican.

However, according to the authors' sources, some officials in the Vatican did object to Wucherpfennig's 2016 statements, as well as the fact that he himself had in the past blessed some homosexual couples.

As it now seems, Wucherpfennig will not be forced after all to recant any of these disputed statements or deeds. As Leven and Wiegelmann point out, the priest himself is quite happy about the public support he has received: “I am happy about this solidarity. That is why I consider this event to be a moment of glory.” He now insists that he will not recant his 2016 statements.

The importance of doctrinal orthodoxy seems increasingly to lose weight under the pontificate of Pope Francis.