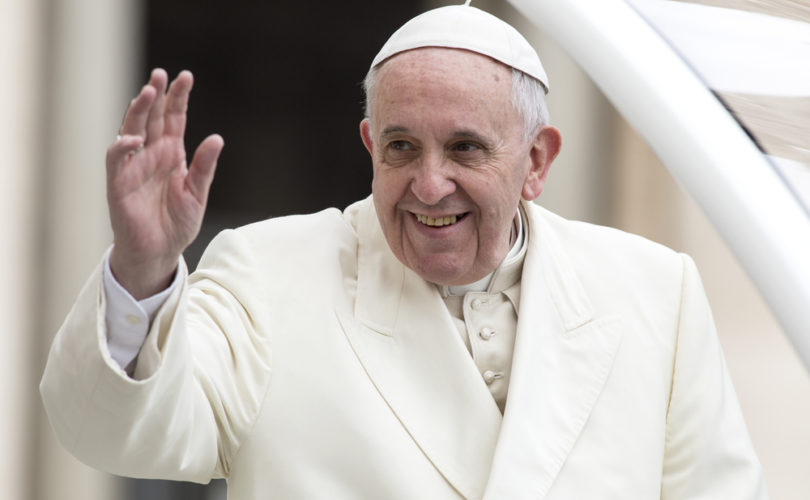 May 17, 2019 (LifeSiteNews) — Pope Francis did not recently shut down the possibility of a female diaconate, contrary to popular belief, according to a top Vatican media official.

Fr. Bernd Hagenkord, S.J., the “chief of service” coordinating all six language sections of Vatican News, published an article on what Pope Francis really said during his May 10 meeting with the International Union of Superiors General (IUSG). Fr. Hagenkord corrected the impression that the pope told an inquiring religious sister about the possibility to found her own church, also making it clear that Pope Francis has not ruled out the ordination of women as deacons.

LifeSiteNews’s Diane Montagna provided a translation of the essential passages of this May 10 meeting, thus avoiding the impression — as it had been shared by many observers on that day — that Pope Francis had come down hard on supporters of a female diaconate. The following papal words in particular had given this impression: “It’s true, not only dogmatic definitions and historic things will help. Not only. But we cannot go beyond Revelation and dogmatic expressions. You understand this? We are Catholics, eh? If someone wants to create another Church, he’s free.”

Earlier on in his remarks on a female diaconate, Pope Francis had told the religious superiors that he passed on to the head of the IUSG the final report of the 2016 Vatican commission on the history of female deacons. He said on May 8 that that document found that “the formulae of ordination for the [female] diaconate found up until now are not the same as for the male [sacramental] diaconate and are more similar to what today would be the abbatial blessing of an abbess.”

Acknowledging the lack of doctrinal or historical evidence to support the idea of ordaining female deacons, Pope Francis explained to the female superiors that there is still an openness to development. He stated:

The Church is not only Denzinger, that is, the collection of dogmatic passages, of historical things. This is true, but the Church develops on her journey in fidelity to Revelation. We cannot change Revelation. It’s true the Revelation develops. The word is “development” — it develops with time. And we with time understand the faith better and better. The way to understand the faith today, after Vatican II, is different from the way of understanding the faith before Vatican II. Why? Because there is a development of knowledge. You are right. And this isn’t something new, because the very nature — the very nature — of Revelation is in continual movement to clarify itself.

As Fr. Hagenkord now insists in his own article, these words were neither a rejection of the women religious who had asked him about women’s participation in the Church nor a rejection of the idea of female deacons. He stresses that Pope Francis, in his long response to the religious sister, said “everything is moving” and that “one does not reach the concrete situation with the help of dogmatic answers.” There is development, and “this path has to be loyal to Revelation, but, after all, also a path of growth,” the Jesuit priest explains.

Interpreting these words as a rebuke of this religious sister “is not correct,” Fr. Hagenkord insists. The papal response was, rather, characterized “by the tension between loyalty to Revelation and growth and change in the adaptation.”

For Hagenkord, Pope Francis’s words show that the “abbreviated and distorted quote that goes through the media does not fit.” He thinks the pope’s words about founding one’s own church were rather meant to be “a joke” and that he tried to find “a light ending to his comments.” Thus, the priest insists, it was not meant as a “personal attack on the woman religious.”

While the Jesuit priest is trying to defend Pope Francis here for his “joking” remarks, he at the same time helps us to understand that Pope Francis did not permanently shut down the possibility of the female diaconate.