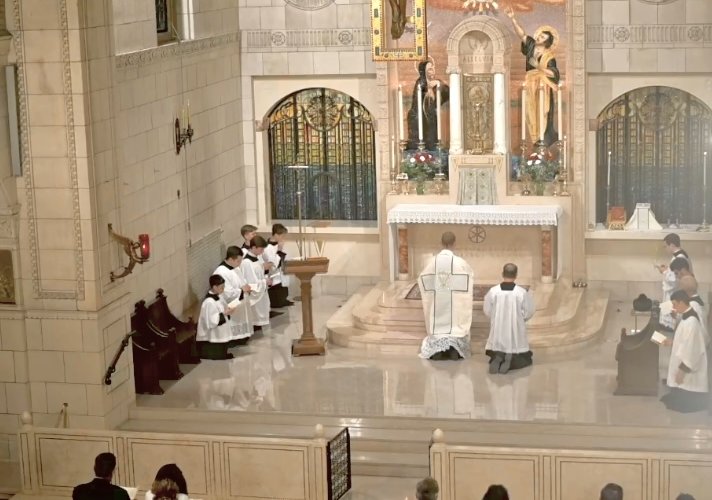 Mass at the Carmelite Monastery of Philadelphia before Facebook

(LifeSiteNews) — According to several sources, the Vatican is attempting to shut down the Carmelite monastery in Philadelphia that had been the cradle of devotion to St. Therese of Lisieux in the early 20th century.

Collaborating with Archdiocese of Philadelphia Auxiliary Michael Fitzgerald, Rome has now discouraged younger traditional nuns who had moved into the monastery from staying to help some of the elderly nuns, with the result that this house of prayer would have to be closed. American Catholics should rally to make it possible that this heart of St. Therese of Lisieux – the “birthplace of devotion to St. Therese” – be preserved as a house of prayer and sacrifice instead of being turned into a museum and retreat center.

The Carmel of St. Joseph and St. Anne, founded five years after St. Therese’s death in 1897, has had a close connection with the “Little Flower” from its beginning. Its website states that one of the founding sisters, Sister Stanislaus of the Blessed Sacrament, was the “the pioneer in establishing devotion to St. Therese in the United States”:

Her assignment as portress gave her the opportunity to share Therese with many others. Until Sister Stanislaus died in 1911, aged only 31, she corresponded with Mother Agnes of Jesus, Therese’s sister Pauline. The letters from Mother Agnes are posted on this site. As a result of this correspondence, the Carmelite Monastery in Philadelphia became the “depot” for thousands of booklets, pictures, and articles promoting devotion to St. Thérèse [as well as relics].

Until recently, this history has been fairly unknown, but Carmel has now posted on its website numerous historical documents showing the spiritual role of the Discalced Carmelites of Philadelphia in the spreading of devotion to St. Therese. The monastery also has custody of first-class relics of St. Therese and her parents, Saints Zelie and Louis Martin, which are on loan from the Magnificat Foundation. This alone should lead any church leader to do his utmost to protect this monastery and make it flourish.

However, Rome has other plans.

On October 4, LifeSite’s Jim Hale published an interview with Father Maximilian Mary Dean, a former Franciscan Friar of the Immaculate who now is the chaplain to the traditional Carmelite monastery in Fairfield, Pennsylvania. The priest revealed that the Carmel of Jesus, Mary and Joseph (which was located at the time in Elysburg, Pennsylvania) had actually sent in 2017, together with its motherhouse in Valparaiso, Nebraska, nine young and well-trained nuns to Philadelphia upon request from the remaining two elderly nuns in Philadelphia and of Archbishop Charles Chaput, who has since retired.

A media report in 2017 quoted the Mother Superior as saying at the time:

The new arrivals “are all in their 20s and 30s and they are all devout, intelligent and talented, and many were home-schooled,” the Prioress said. “They want an authentic Carmelite vocation. We will have a solemn profession for several of them in January and one is still a novice.”

With the help of these Carmelite nuns, the Carmel of Philadelphia could have become again a flourishing house of prayer, though within a slightly different Carmelite tradition, namely the Spanish one instead of the original French one. As of now, Carmel in Philadelphia is still beloved by the laity, who attend the Traditional Latin Mass there and assist the one remaining Mother Superior, after her fellow nun died recently.

Father Maximilian Dean recounted in the recent LifeSite interview that the younger nuns made sacrifices to move to urban Philadelphia after having lived in calm and rural surroundings. But then they faced several obstacles from incoming Archbishop Nelson J. Perez (but most probably not upon his own initiative).

The younger nuns were told that they could not live according to their own traditions and rites – as it had been previously promised to them under Chaput – but that they had to adapt to new styles as prescribed by an association of Carmelite orders, the St. Joseph Association, that the Philadelphia Carmel had entered after the publication of Pope Francis’ new document Cor Orans, which called upon contemplative monasteries to join larger associations.

Father Maximilian explained that these circumstances made it clear the young nuns could not stay and so they left on April 9 with tears and also with some joy.

The Mother Superior, who is now alone in the Philadelphia monastery, still receives kind and generous assistance from lay people.

The Carmelite nuns described the events in a June 19 letter to their friends as follows:

For many years, the Philadelphia Carmel had been part of an association. When our Nuns arrived, it was assumed that withdrawing from this association would be a small matter. After all, the Nuns had been invited by the community and the Archdiocese of Philadelphia with the clear understanding that they were part of a young, thriving, dedicated Order who loved the Extraordinary Form of the Holy Mass and the time-honored traditions of the Discalced Carmelites. As attempts were being made to not only interfere with but to obstruct their way of life, the Nuns tried one way after another to gracefully bow out of this pre-existing commitment. When it became painfully clear that the freedom to maintain their identity as originally promised by the Archdiocese was not being honored, the only option left to the Nuns was to return to the monastery in Valparaiso, Nebraska. They did this in the most correct way possible, fulfilling all canonical requirements.

As it becomes clear, the Archdiocese would rather allow the Carmel of Philadelphia to be shut down than to encourage the development of a traditional community of Carmelite nuns.

According to one source close to the situation, the Mother Superior who is still in Philadelphia has now requested from Rome that the monastery be preserved as a house of prayer so that at some future point Carmelite nuns could come and renew the monastery.

But there are plans to “suppress and plunder the Monastery,” in the words of one source, and this agenda is being led by Bishop Fitzgerald. Mother Superior is trying to forestall this plan and reached out to Rome. It is in this context that the Vatican intervened more expressly.

In early September, Father Rafal Wilkowski – who works under Cardinal João Braz de Aviz, the head of the Congregation for Religious – “responded and said that a Visitation would be planned.” The source continued, “At the recent visitation [which took place at the end of September, before the visitation of the Fairfield monastery], Mother chose to explain the plans to preserve the Sacred Monastery in the hope that the Holy See will cooperate. The Vatican representatives stated that it is the plan of the Vatican to suppress the monastery.”

At this point, Mother Superior is waiting to hear from Rome, with whom she has politely and faithfully collaborated, even though, as another source told LifeSite, the archdiocese tried to spread rumors about her state of health, trying to discourage Carmelite nuns from other monasteries in the United States from moving to join her.

“Mother Pia is a beautiful, holy, devout and grace-filled nun,” one source told LifeSite. “I am blessed to know her. She is also very sharp witted. Any thought that she is somehow compromised is pure slander.”

LifeSite was also informed that the same group of clergymen trying to close down Carmel have “spent their entire careers closing churches and schools and who were leaders during the sex abuse scandals who failed to lead us out of them while persecuting those priests who did speak out.”

In an October 11 statement reaffirming his warning that Rome has a bias against tradition-minded monasteries and is out to close them down, Father Maximilian also spoke once more of the Philadelphia monastery and how it was used by Rome for a larger onslaught on the traditional Carmelite nuns in Fairfield and Valparaiso, just because they had tried to help their Philadelphia sisters of the Carmelite Order. He wrote:

In the case of the Carmelite Nuns who left Philadelphia, there was obviously a serious problem between two parties: the community of Nuns coming from Valparaiso, NE, and Fairfield, PA, to rejuvenate the Philadelphia Carmel on the one hand, and the Archdiocese, Father General, and the Association of St. Joseph on the other hand. If the Congregation was unbiased they would investigate BOTH sides of the problem – but instead the Congregation has already decided that the traditional Nuns are in the wrong and this is obvious because instead of using a third party to investigate both sides of the story the Congregation chose people on one side of the problem to investigate those on the other side of the problem (the Visitator [Father Rafal Wilkowski] is one of Father General’s right hand men – a Definitor on Father General’s Counsel, and the Co-Visitators are the current and former President of the Association). The Co-Visitators actually sent spies; they discussed the need to stop me from bringing the Sacraments and to switch the [Fairfield] Nuns over to the Novus Ordo Mass; they discussed strategies for turning the benefactors away from these traditional communities.

Father Maximilian confirmed that the Apostolic Visitation did not look to help the Philadelphia nuns continue to be an important house of prayer, especially in light of its historical role as a cradle of the devotion to St. Therese of Lisieux in the United States.

“I am not permitted,” he concluded, “to write here what they actually did during the Visitation [in Philadelphia and Fairfield] itself, but let’s just say that I was 100% correct in my assessment and that the Nuns pulling from Philadelphia was used as a pretext by the Congregation to go after these traditional Monasteries.”

LifeSiteNews has reached out to the Archdiocese of Philadelphia for comment, but has yet to hear back.