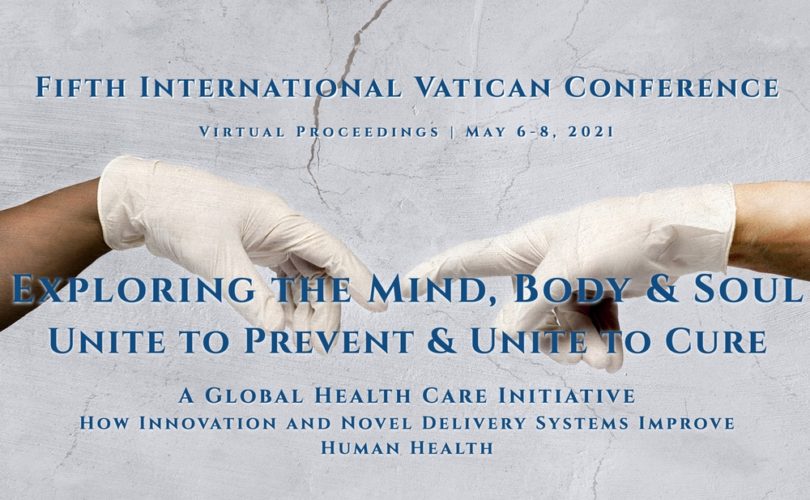 May 11, 2021 (LifeSiteNews) — At some point during the three days I watched the pre-recorded online 2021 Vatican Health Conference, I noticed the product placement.

Some of it was rather innocent, really. While looking at the décor of the homes or offices behind the participants, I began to notice the carefully placed books for sale. One was fetchingly propped up on a piano. The funny thing is that even though I knew that the guests of the Pontifical Council for Culture were angling for a sly sale, I went ahead and bought a book anyway. Well played, Dr. William Li, President, Medical Director, and CEO of the Angiogenesis Foundation. Well played.

Some of product placement was not very funny, however. The emblem of the Pontifical Council for Culture was constantly on the screen, and so it looked like a Vatican stamp of approval of everyone who spoke and of everything they said. I was rather startled on the third day when an American theology professor from Scotland’s St Andrews University said that “we can forgive people for believing in a soul,” and an American psychology professor at Yale suggested that while kids have imaginary friends, adults have God.

Now to be honest, this was top level “philosophy of the mind” stuff and a serious mental workout for a PhD drop-out like myself, but given that the Vatican was hosting this conversation, it would have been nice if they had offered a robust response by a star of Catholic philosophy like Peter Kreeft. I get that, in the closing words of conference co-host Dr. Robin Smith, the “Vatican Conference focuses on collaboration, putting differences aside, and working together to solve problems and improve human health.” However, I didn’t see a whole lot of Catholic contribution to the collaboration. Even in something as innocuous as the round-table between representatives of different religions about food, we heard from Islam, Judaism, and Mormonism (no coffee!?), but nothing about Catholic (or even Orthodox) penitential practices in Lent.

That said, Msgr. Tomasz Trafny, the Polish head of the science and faith department of the Pontifical Council for Culture, put up a polite fight against introducing “irreversible changes” to the human genome during Friday’s alarmingly entitled “Human Enhancement Round Table.” On the other hand, there wasn’t a lot of push-back when the Harvard Professor of Genetics brushed aside the ideas of “natural” and “unnatural” or even a giggle when he said that “safety is the purview of the Food and Drug Administration.”

Yes, Harvard. From a strictly worldly point of view, there was an impressive line-up of participants at the Vatican health conference: American professors from Ivy League schools; international CEOs from Big Pharma; billionaires like Judy Faulkner of Epic Systems; famous soprano Renee Fleming talking about music therapy; NFL star Brandon Marshall on mental illness; supermodel Cindy Crawford on being as nice to yourself as you are to your best friend. There were also celebrated journalists and TV personalities giving masterclasses in softball interviews: Katie Couric, ABC’s Robin Roberts, CNN’s Sanjay Gupta, ABC’s Anna Robach, Oprah’s Amos Oz. There was even royalty in the person of the Knights of Malta’s Dominique Prince de La Rochefoucald-Montbel, Jordan’s anti-cancer activist Princess Dina Mired, and Aerosmith’s Joe Perry.

There were a few remarks from Cardinal Ravasi, an address by Cardinal Parolin and, at the end, a speech by Pope Francis. Theirs were the biggest names representing Catholicism — and the Italian language. For an international gathering, the Fifth Vatican Conference was overwhelmingly American and anglophone. For a Vatican conference, it was strangely secular.

From a viewer’s perspective, it was also a firehose of information and opinion. There were dozens of presentations on a myriad of topics, including mRNA vaccines and gene editing, and although these were usually short, they were sometimes complex. They were rapid fire, one after other without a recess, and on Friday, I had to finally take a break in order to report that Chelsea Clinton had called for global regulation of social media so that criticism of COVID-19 vaccines could be suppressed. On Saturday I was back at the screen to see if primatologist Jane Goodall would make my next headline by saying humans are basically just chimpanzees. In fact, she said we were the “fifth great ape” and acknowledged that we are genetically “just over 1%” different from chimpanzees—and much more intelligent,” if lacking in wisdom. She hopes we will extend the Golden Rule to animals and stop trashing the planet.

Given the diversity of the topics and speakers — Cindy Crawford on food, researchers on the ethics of collecting our private medical data for the greater good of humanity — I often wondered who all this expensive intellectual largess was for. As it happens, it was for university students, particularly those associated with the Vatican’s Science and Faith (STOQ) Foundation, including those at the pontifical universities in Rome, like the Angelicum, Gregoriana, Salesianum, Urbaniana, the Laterna university, or Santa Croce. If any of them are reading this, I hope they will write in to tell me what they made of it all. Incidentally, if anyone mentioned the Holy Name of Jesus during the Vatican conference, I must have been working on my Chelsea Clinton story, for I never heard it uttered.

Meanwhile, it didn’t escape my notice that some of the companies that funded the conference also provided presentations. The Church of Latter-day Saints, whose baptisms the Catholic Church does not accept as valid, provided money, an Elder to offer the Mormon point of view in interreligious round tables, another Elder to discuss medical missionary work (very well, as it happens), and a Utah gazillionaire to discuss effective philanthropy. The latter, I feel compelled to add, was the only speaker I saw who had religious art in the background: a tasteful representation of the Lord Jesus Christ. (Pope Francis was framed by rather tacky white wallpaper.) Moderna supplied even more money than the Church of Latter-day Saints, and its CEO told us the story and workings of the abortion-tainted Moderna mRA COVID-19 vaccination. The Vatican announced that it had given him an award.

Little wonder, then, that I felt very often that the presentations were selling stuff: not just books about compassion, longevity and food-as-medicine, but the latest biotechnology, the latest telehealth software, the voluntary surrender of privacy for swifter, more effective medical treatment, COVID-19 vaccines. Although many of the projects and products discussed are undoubtedly beneficial to humanity, the crossed keys of St. Peter in the corner of the screen came to resemble the Royal Warrant or the three feathers of the Prince of Wales stamped on various British businesses, like Burberry's fashion house or Taylor’s of Harrogate (“specialists in tea and coffee”).