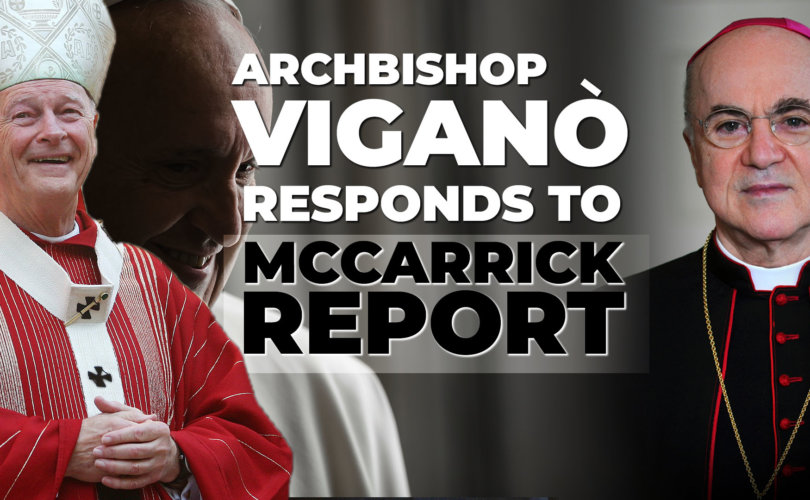 November 9, 2020 (LifeSiteNews) — At 8 am this morning the Vatican released the long-awaited 499-page McCarrick report officially called the Report on the Holy See’s Institutional Knowledge and decision-making Related to Former Cardinal Theodore Edgar McCarrick.

Just as we suspected from the beginning, the report is an effort to blame Popes John Paul II and Benedict XVI for the McCarrick scandal and paint Pope Francis as the hero. Indeed, the report begins by noting that the report was commissioned by Francis for the good of the universal church. But there is a new twist which we should have seen coming. They try to put the blame for McCarrick also on Archbishop Viganò.

First off, the report claims Francis had heard only that there had been allegations and rumors related to immoral conduct with adults occurring prior to McCarrick’s appointment to Washington. And here is where the blame game goes, giving Pope Francis a pass and blaming JPII and Benedict: “Believing that the allegations had already been reviewed and rejected by Pope John Paul II, and well aware that McCarrick was active during the papacy of Benedict XVI, Pope Francis did not see the need to alter the approach that had been adopted in prior years.”

It explains how when in June 2017, the Archdiocese of New York learned of the first known allegation of sexual abuse by McCarrick of a victim under 18 years of age, and they found the accusation deemed credible, “Pope Francis requested McCarrick’s resignation from the College of Cardinals,” and then after he was “dismissed from the clerical state.”

And as we’ve said that action enabled the Vatican not to have a formal investigation since McCarrick was no longer a cleric.

The report also intentionally excludes current financial controversies and foreign relations which would put Pope Francis in a very negative light. Remember McCarrick was one architects of the disastrous Vatican-China deal selling out the faithful in China to the Communist Party and one of the founders of the Papal Foundation which has been embroiled in Vatican financial corruption. All of this exploded under Pope Francis but the McCarrick report specifically excludes these aspects of McCarrick’s record.

On the financial side the report says: “While McCarrick’s fundraising and gift-giving are discussed below, the Report does not provide an accounting of such activities, which took place over at least four decades.”

And why? Well, the report says “although McCarrick’s fundraising skills were weighed heavily, they were not determinative with respect to major decisions made relating to McCarrick, including his appointment to Washington in 2000.”

With regard to foreign relations, it says: “this Report avoids setting forth detailed information implicating foreign affairs, particularly as to ongoing or delicate matters.”

The report, while it admits that Archbishop Viganò twice in 2006 and 2008 demanded investigation by the Congregation for the Doctrine of Faith, tries to blame Vigano of all people for neglect in the McCarrick case.

Viganò said that even though he will express himself further after having analyzed the report further, he believes that “the Vatican fiction continues.”