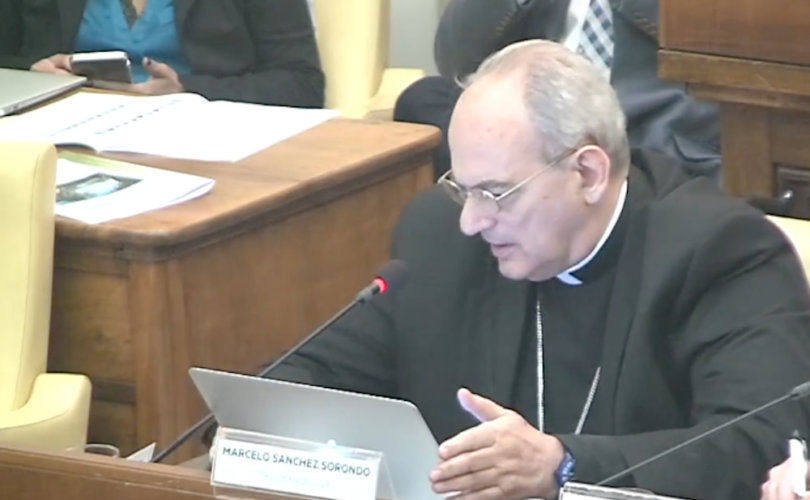 Bishop Marcelo Sánchez Sorondo, the head of the Pontifical Academy of Science, will preside over a global warming conference in November at the Vatican.

“Health of People, Health of Planet and Our Responsibility: Climate Change, Air Pollution and Health” will be held November 2-4 at the Vatican.

The conference’s title obscures the questionable personal ideologies and professional objectives of a number of its slated participants.

John Schellnhuber is founding director of the Potsdam Institute for Climate Impact Research (PIK) and chair of the German Advisory Council on Global Change (WBGU). He is considered one of the world’s leading climate scientists and one of the strongest advocates of the theory that the earth is undergoing catastrophic global warming.

Schellnhuber is also known for his advocacy of a one-world government. In order to avoid his catastrophic predictions for unchecked climate change, Schellnhuber proposes the need for indispensable forms of world governance – or in his own words, a “global democratic society” – to be organized within the framework of the United Nations. Schellnhuber says in his 2013 article “Expanding the Democracy Universe” that “global democracy might be organized around three core activities, namely (i) an Earth Constitution; (ii) a Global Council; and (iii) a Planetary Court.”

Schellnhuber has little patience for those who do not accept his scientific theories and conclusions. In a May 2014 interview with musician Pierre Baigorry, Schellnhuber claimed that sometimes politicians have to take citizens to task “with coercion” to overcome their own resistance to change.

Dasgupta is a proponent of population control, lauding China’s Human Development Index despite that country’s brutal “family planning” policy. He is also a patron of Population Matters, formerly known as the Optimum Population Trust, that lobbies for a “sustainable population size,” including the “reversing of population growth” in many countries.

Dasgupta said, “We need to unravel the processes that led to the ills we are now facing. That is why the Vatican symposia involve natural and social scientists, as well as scholars from the humanities. That the symposia are being held at the Papal Academy is also symbolic. It shows that the ancient hostility between science and the church, at least on the issue of preserving Earth’s services, has been quelled.”

Peter Raven is a biologist who specializes in plants, butterflies, and evolution. At the last PAS symposium, Raven said, “We need at some point to have a limited number of people, which is why Pope Francis and his three most recent predecessors have always argued that you should not have more children than you can bring up properly.”

Raven was incorrect to claim that the three popes before Pope Francis agree with him on the “need at some point to have a limited number of people” so they can be raised “properly”.

Columbia University’s Jeffery Sachs, who co-hosted the Vatican’s 2015 conference on climate change, believes that abortion is a legitimate way to reduce the population.

Sachs made a plea for legalizing abortion as a cost-effective way to eliminate “unwanted children” when contraception fails in his 2008 book Commonwealth: Economics for a Crowded Planet.

He describes abortion as a “lower-risk and lower-cost option” than bringing a new human life to the world.

He also wrote that the “legalization of abortion reduces a country’s total fertility rate significantly, by as much as half a child on average,” and criticized former U.S. Presidents Ronald Reagan and George H.W. Bush for denying groups that provide and promote abortion any U.S. funding through the Mexico City Policy.

Sachs is listed as an author of the background note to a declaration adopted by scientists and religious leaders at the 2015 Vatican conference that validated the theory that human activity is changing the Earth’s climate. Unlike the declaration, the background note with a Vatican emblem at the head speaks of the world’s population as a problem.

A few political figures from the United States will also participate. All hail from California: U.S. Congressman Scott Peters; state Senator Kevin de León, president pro Tempore of the California State Senate; and California Gov. Jerry Brown, who will deliver a keynote address on the closing day of the event.

All three are strong supporters of Planned Parenthood.

Presiding over the event will be the head of the Pontifical Academy of Science, Archbishop Marcelo Sánchez Sorondo.

Sorondo has an anti-capitalist worldview and is opposed to traditional Church doctrine.

Sorondo’s connection to population control elites is clear, not only from his bringing them to the Vatican but also their feting him and having him sit on the Leadership Council of the Sustainable Development Solutions Network, an organization launched by then-U.N. Secretary General Ban Ki-Moon. On the leadership council, alongside Sorondo, are Sachs and Ted Turner, two of the best-known promoters of coercive population control in the world. Turner held an event at the posh Harvard Club in New York City to celebrate Sorondo’s work on Sept. 25, 2015.

At the Biological Extinction Symposium, the Archbishop’s confounding statements regarding procreation were disconnected from Church principles. He said, “Many times, we don’t know exactly what is the doctrine of the Church.”

Past performance indicative of future behavior?

The last few PAS conferences have caused pro-life critics to point out that no strong orthodox Catholic voices have been present, and so views antithetical to church doctrine have been categorically asserted without anyone presenting Catholic corrections to their statements.

At one, Archbishop Sorondo himself promoted reducing family sizes, saying that “when you have education” women will only have one or two children instead of seven.

One of the conference experts replied that “without having access to birth control, she will have more children than she wants.” “And that’s why it is not just education alone, it is a combination of education and birth control that brings fertility down.”

Nobody present at the conference contradicted him.