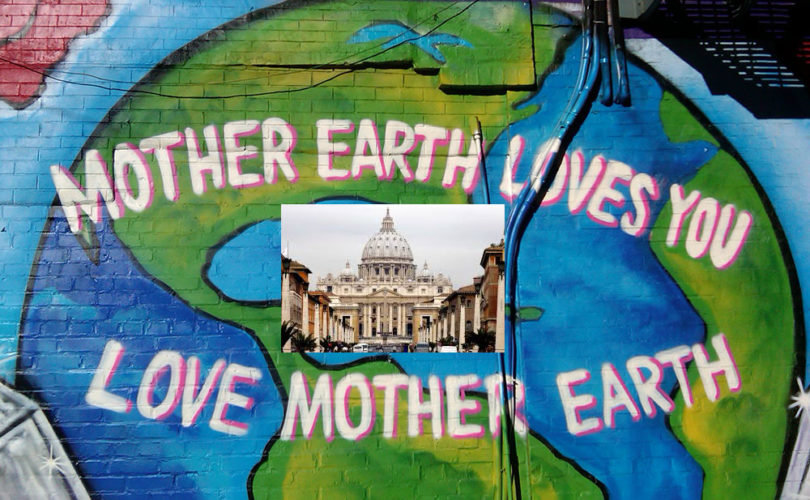 March 12, 2015 (LifeSiteNews.com) – Current Vatican representatives at the UN do not appear to understand the dangers of uncritically using key, population control invented phrases in offical Vatican statements to the United Nations.

There have been increasingly concerning actions by Vatican representations at the UN that, likely without intending to, are causing the Church to give huge international reinforcement to the deceits and manipulations of de-populationist agendas. The use of the phrases “sustainable environment,” “sustainability reports” and “sustainability-related impact and performance” in a March 9 statement by Archbishop Tomasi, the Vatican’s chief representative to the UN, is the latest example of this worrisome trend.

Let’s first get out of the way what we should all agree on. Pollution is bad and harmful to human health and the environment in general. No one should be opposed to protecting the natural environment, but in a way that always respects human dignity and human rights. That would include not opposing responsible actions of corporations, miners, farmers and others who ethically exploit the natural environment for legitimate purposes, including often desperately-needed employment, income and energy resources for underdeveloped regions.

However, there is an international movement that has been gaining power and influence and which has the goal to drastically reduce the world’s population – by almost any means – and to institute a dangerous global governance regime over all nations. These forces also tend to be militantly secular.

In his statement, besides the use of the code word “sustainable”, Archbishop Tomasi makes other statements that appear to give much credibility to “the United Nations Framework Convention on Climate Change”. That is terribly concerning to those who have become familiar with the generally evil purposes and promotion methods of the Climate Change movement. The main drivers of that movement have proven to generally be manipulative, anti-human environmentalist ideologues of the elite for the elite.

Also, in many ways that movement has revealed itself to be another religion – a pagan-like, earth-worshipping movement willing to sacrifice billions of human lives to please its Mother Earth god. I do NOT exaggerate that.

There is so much evidence supporting credible skepticism of climate change/global warming claims that one has to be nearly brainwashed, astonishingly closed-minded or willingly uninformed to, at the very least, not be questioning many of those claims.

I won’t get into all of that right now and will limit comments in this article to the use of the environmentalism, population control code word, “sustainable”, which no pro-life person or believing Christian should ever use. They should not use it because each time it is used it gives credibility to the propaganda intent of the current promoters of the word and the context they have embedded around it. It is anti-life, anti-family and a danger to human rights and freedoms.

In a 2003 report LifeSite reported that,

Archbishop Javier Lozano Barragán, president of the Pontifical Council for Health Care Workers, called the ‘global ethic’ movement an eco-religion which holds “sustainable development” as the highest good.  He said it manifests itself “as a new spirituality that supplants all religions, because the latter have been unable to preserve the ecosystem.”

In a word, this is “a new secular religion, a religion without God, or if you prefer, a new God that is the earth itself with the name GAIA,” he said.  “The different religions existing in the world have been unable to generate this global ethic; therefore, they must be replaced by a new spirituality, which has as its end global well-being, within sustainable development,” explained Archbishop Barragán.

The 2002 World Summit on Sustainable Development (WSSD) was otherwise known as the Earth Summit. In a 2002 report on that summit LifeSite reported, “Without their powerful allies Bill Clinton and Al Gore, population controllers, abortion advocates and environmental extremists are having a depressing time at the Earth Summit.”

Those “population controllers, abortion advocates and environmental extremists” have always been the organizers of these Earth Summits and similar conferences for many years. Their agenda has always been the real agenda of those conferences. They have thankfully so far been heavily resisted by pro-life, pro-family forces and others who have understood the dangers of the Summit agendas to freedom and national sovereignty and cultures.

The recent, dramatic and seemingly unprecedented change in the Vatican position under Pope Francis marks a possible major historical breakthrough for the one-world, anti-human environmental extremists. They have never had the worldwide influence of the Vatican in their corner, but they have had many Catholic “justice and peace” organizations and Catholic educators disposed towards many of their goals.

Mosher explains that such UN-speak phrases “actually have quite radical and subversive meanings that are lost on the general public.”

He goes on to explain that,

“There is a reason for this linguistic deception. Properly understood” they are part of “a battle plan for a deadly assault on life and marriage.” Mosher says that if the recommendations of the UN’s plan “were to be fully adopted by UN’s member states and carried out,” they “would mean the end of families as we know them, and a top-to-bottom restructuring of societies and economies as a whole.”

I am now firmly convinced that is also the real agenda behind the climate change/global warming movement, at least at the leadership and major funding levels.

Mosher further explains, “UN bureaucrats disguise their true goals by using code words that only they and other progressives, who are also in the know, can understand.” That is why Archbishop Tomasi's recent Vatican statements can be seen to be dangerous.

Mosher then translates UN-speak words. Here are the two that pertain to this article:

Whenever you read the word sustainable, as in “Sustainable Development” or “Sustainable Population” you should substitute the words “limit” or “restrict.” For example, when the UN report says:

It actually means something like, “Population control policies should be based on the promotion of sterilization and abortion.”

“Sustainable development” is a catchphrase of the radical environmentalists who want to limit economic growth, which they see as harmful to the environment, by limiting population growth and resource use in poor countries. As the Report advocates:

“Protect the commons and prevent the appropriation and exploitation of natural resources by private and public interests, through state oversight and multi-stakeholder regulation; “Promote transitions to sustainable low-carbon, climate-resilient consumption and production patterns while ensuring gender equality.”

These directives mean that land and mineral resources, regardless of the needs of the population, are to be set aside in nature preserves. Energy production and consumption are to be kept low. And the population, it goes without saying, without access to resources and energy, will remain poor.

Mosher’s warnings are given special credibility by those aware of his history in solely exposing and bring about major US policy changes regarding China’s horrific forced abortion terror. That Communist Chinese policy has now resulted in over 1oo million abortions and the deaths of untold numbers of women who resisted or committed suicide as a result of being forcibly aborted, often very late in their pregnancy and even up to 9 months.

The seemingly radical change in the Vatican’s approach at the UN in the past few years is seriously disconcerting. For many years they have been THE uniting and coordinating force for all the pro-life, pro-family movements' incredibly effective efforts at the United Nations.

Now, many are uncertain what the Vatican agenda is. It does not appear nearly as clear as it was when John Paul II first appealed to pro-life groups around the world to get involved at the United Nations. They did, in large numbers, and mostly stopped the anti-life, anti-family forces in their tracks up to this day. There have been numerous spectacular successes.

We should all hope and pray that those successful tactics and solid principles are still encouraged and facilitated by the Vatican delegation at the United Nations. Without that strong, consistent leadership of the past, the entire world will be endangered. Too much cooperation with the Obama/EU/UN/de-populationist/global warming schemes would be deadly. All of these forces have proven to be extremely manipulative and hostile to Christian civilization principles.

Together with the Vatican, the life and family organizations have been the conscience and truth disseminators to national representatives at UN conferences, especially on behalf of the poor nations which the elites have targeted the most for their destruction of life, family and unique national cultures.

See the following video with one type of criticism and informative exposure of the UN's version of “sustainable development”:

As for Climate Change see this article which is only one of hundreds of similar articles exposing the fraud that is being imposed on the world.