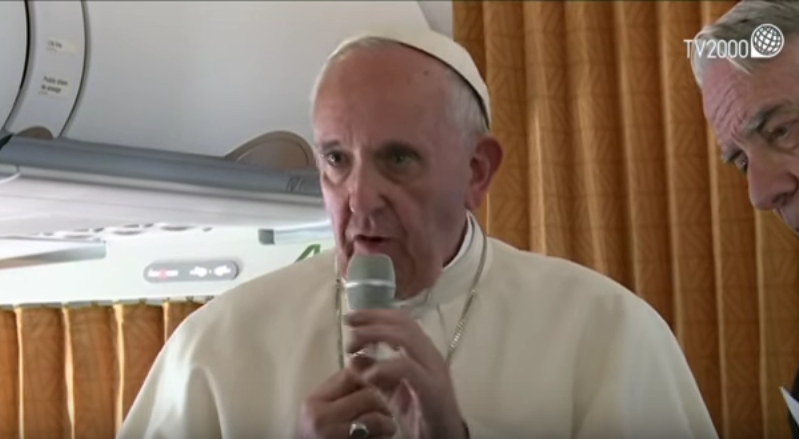 No one seems to agree about whether Pope Francis’ recent apostolic exhortation, Amoris Laetitia, changes Church discipline and opens the door to Communion for the divorced and remarried.

The now-infamous footnote 351 certainly appears to do just that, and this is the interpretation that Cardinal Walter Kasper – the cardinal behind the push to allow the divorced and remarried to receive Communion – himself clearly takes. But some have disputed this, pointing to clear canon law and established Church practice, as well as some of the ambiguities surrounding the footnote itself.

So it was with eagerness that many Catholics listened to a question on the matter posed to Pope Francis this past weekend on the flight back from the Greek island of Lesbos.

A reporter asked the pope, point blank, whether there are any “new concrete possibilities that did not exist before the publication of the exhortation” for the divorced and remarried, making specific reference to “the discipline that governs the access to the Sacraments.” The reporter’s complete question is provided at the bottom of this post.

In recordings of the pope's answer, the audio is completely unambiguous, as is the Italian itself. There can be no doubt about what the pope said, nor of how to translate those five straightforward words into English.

However, while those first five words – taken alone – seem at first glance like a stunningly clear response from the pope on a matter of enormous importance, the latter part of his answer reintroduces ambiguity.

“But that would be too small an answer,” he continued, after which he encouraged journalists to refer back to Cardinal Schonborn’s presentation about the exhortation. “In that presentation your question will have the answer,” he said.

On the question of the sacraments for those in “irregular” unions, Schonborn's presentation largely just refers back to the text of the exhortation itself – including the controversial footnote 351. That footnote says that the Church's help for those in irregular unions can “in some cases” include the sacraments. (Schonborn himself allows the divorced and remarried in his diocese to receive Communion following a period of discernment.)

And so journalists are now scrambling not just to interpret the exhortation itself, but the pope's answer on the plane. However, that process of interpretation has not been aided by the fact that the Vatican website clearly misquotes the pope – in a way that adds additional ambiguity.

The important change here is the obvious alteration of the verb “posso” (I can) to the verb “potrei” (I could). Nobody who listened to the audio could have possibly heard the word “potrei.” It’s simply not what the pope said.

And the change, while small, is not of small importance. In grammar-speak, whoever transcribed the interview for the Vatican changed the first person form of the verb “potere” (to be able) from the indicative mood to the conditional mood. And, as any grammarian or student of language knows, the conditional mood is designed to convey the hypothetical or the uncertain.

But if you watch the video of the pope’s answer (below – start at 21 minutes and 40 seconds), he doesn't appear to be speaking with uncertainty. His cadence, his gestures, his wording – everything conveys certainty and clarity. Thus, for instance, his use of the emphatic word “punto” (period) at the end of the first sentence. “I can say yes, period.”

Now, it could very well be that this transcription error was an innocent mistake. Having listened to a bunch of the rest of the interview, in Italian, and compared it to the Vatican transcription, it’s clear there isn’t always a one-to-one correspondence. Occasionally the pope’s words are moved around to clarify sentence structure, some adjustments are made to improve his grammar (He's not a native Italian speaker, and sometimes uses unusual grammatical constructions), or words that the pope mumbled or seemed to imply are simply provided.

The “Italian method” of journalism, as we have often been told during this current pontificate, sometimes takes the form less of a science than of an art (just think of the Pope’s unrecorded “interviews” with the atheist Scalfari, which Scalfari openly confesses he reconstructs from memory). It could be that the (likely Italian) transcriber of the pope’s remarks either misheard him (hard to imagine given the clarity of the audio), or simply thought the pope sounded like he intended to use the conditional (a not totally unreasonable possibility), and therefore “fixed” his grammar.

But even if so, the issue deserves to be corrected for the sake of the public record, since this a case where even an innocent attempt to “fix” the pope's grammar clearly amounts to editorializing. Given that these words are one of the only keys we have to intrepret the exhortation, it's important that the debate at least starts with an accurate transcription – after which we can get into the murky waters of what the pope “intended” to say, or what it means.

There are already online disputes about the translation. (Bizarrely, one leading Catholic news agency mistranslated the pope as saying, “I can say yes, many” – which he clearly didn’t say – while Vatican Radio for some reason leaves out the emphatic word “punto.”) In response, some are simply referring back to the Vatican transcription as the official account of what the pope said. However, the Vatican transcription is clearly wrong. It seems the only way to truly confirm what the pope said in some cases may be to obtain the video of what he said and listen with your own ears.

The reporter’s complete question: Some maintain that nothing has changed with respect to the discipline that governs the access to the Sacraments for the divorced and remarried, and that the law and the pastoral practice and obviously the doctrine remains the same. Others maintain instead that much has changed and that there are many new openings and possibilities. The question is, for one person, a Catholic, that wants to know: Are there new concrete possibilities that did not exist before the publication of the Exhortation, or not?