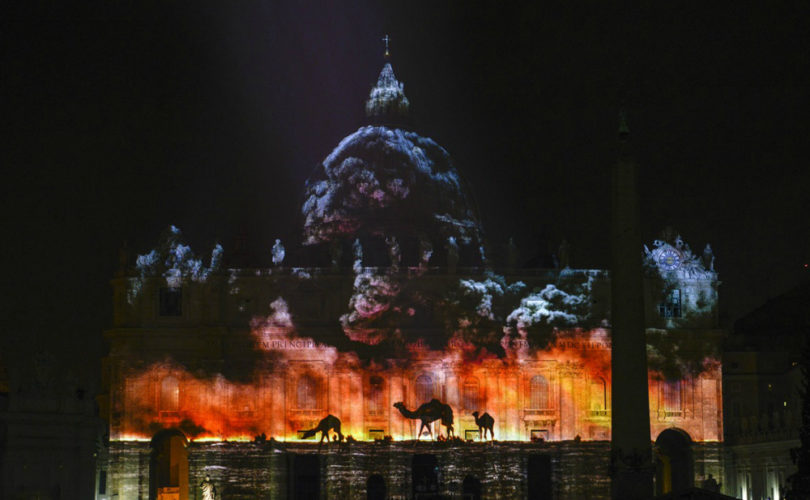 December 8, 2015 (LifeSiteNews) – I just watched the rather spectacular light show at the Vatican featuring some of the most dazzling graphics imaginable broadcast onto the façade and dome of St. Peter’s Basilica.  It’s hard to criticize something with so much artistry and beauty. It was a parade of the most endangered species and habitats on the planet in bright color and an impressive sound track to accompany it.

One of the big problems, of course, is that it’s an inappropriate venue for such a show. Just as you wouldn’t store coloring books in the tabernacle or use a chalice to drink your coffee, the façade of a Church consecrated to the worship of God is not the place for a – albeit beautiful – work of political advocacy.

Even if we ignore the difficulty of mixing the sacred with the profane and we turn to the message itself, how could the Catholic Church countenance a display of the world’s endangered animals and habitats and fail to include the most endangered of all – the unborn child?  The habitat of the womb, which was revered as a sacred place of nourishment and care, has become one of the most deadly places on the planet. Wanton dismemberment of innocent human beings takes place by the tens of millions around the globe each year.

But those endangered lives, and that habitat, does not fit within the agenda of the Vatican’s partners in the climate change push.  The World Bank, the major financial backer of the venture, is actually on the other side, pushing for the extinction of the right to life for unborn children and to make the habitat of the womb forever hostile to the inviolable protection for God’s children being knit together in the wombs of their mothers.

As the Year of Mercy launches with this show, it makes me wonder if we’re testing God’s mercy rather than celebrating it.