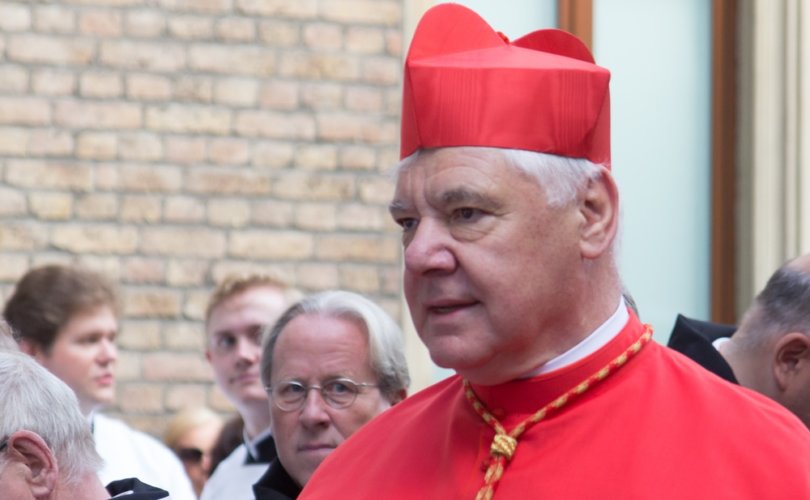 May 16, 2019 (LifeSiteNews) – Cardinal Gerhard Müller, former Prefect of the Congregation for the Doctrine of the Faith, said that while he believes Pope Francis is not a heretic, the April 30 Open Letter from prominent clergymen and scholars accusing the Pope of committing heresy, nevertheless, deserves a “response” from Rome.

The German prelate said in an interview with Die Tagespost's Regina Einig that the authors of the letter are “renowned theologians.” Therefore, he says, “it would be important that the Holy Father makes the Congregation for the Faith issue a response, and not the Secretary of State or any of his friendly journalists or theologians.”

Cardinal Müller said that the accusation of heresy that has now been addressed to Pope Francis in the Open Letter to Bishops “is the worst thing” that “can happen” in the Catholic Church, since “the Pope is, as bishop of Rome, the successor of Saint Peter, upon whom Our Lord has built His Church.”

“As much as one can understand the concerns of these theologians [who criticize the Pope], one also has to say that one has to choose the right means for the justified aim of a greater clarity of some statements of Pope Francis,” he commented later in the interview.

Responding to the argument that there have been in the past some popes who taught, in individual points, heresy, the German cardinal stated: “Here [with the Open Letter], the accusation goes much deeper, that is to say, that the whole edifice of the Catholic Faith in its principles of knowledge and in some of its essential contents is being uprooted. I do not agree with this.”

For Cardinal Müller, the “problems arise rather, in my view, with the help of a wrong approach that the Church is said to have been left behind and that the Faith is in need of a modernization, so that the contradiction in moral questions with regard to the leading forces of the Western world is not so glaring.”

“In the camp of the 'friends' of the Pope,” the prelate continued, “one mixes up the Faith with a neo-marxist, neo-liberal ideology.” Catholics are left to wonder, however, why Pope Francis chooses such friends in the first place.

The prelate called upon Pope Francis for help to clear up the problems: “Here, it is time that Pope Francis speaks a clear word for the sake of the unity of all Catholics in the revealed Faith. Not a blind obedience toward a command of the party line of the moment is asked, but trust in the Pope and the bishops who themselves also know of the limits and of the characteristic of ecclesial authority.”

“A teaching is not true – nor is a Catholic called to obey blindly – just because a bishop gives a command (simply out of his own formal authority), but because the instructions of the Church authorities are rooted in Holy Scripture, Tradition, and in the defined doctrinal teaching of the Church.”

As an example, Cardinal Müller mentioned here Communion for Protestant spouses of Catholics, as it has been introduced last year by many German bishops. Müller states: “For example, the command of a bishop to give Holy Communion to non-Catholic faithful is against the Faith and may not be obeyed. The sanctions that he [the bishop] would order because of this [disobedience] are invalid and need to be lifted by the Pope and his tribunals.”

Cardinal Müller outlined the threat facing the Church: “The Church indeed finds herself inwardly and outwardly in one of the gravest crises of her whole history. She will not continue to exist when she is being turned into a religious-political NGO and when the teaching on faith and morals, as it has been revealed to us by Christ, is being relativized or fully abandoned.”

The German prelate also strongly criticized the newly promoted principle of “synodality” when he says: “We will soon not recognize anymore the Church, when the adaptation to the decline of morality is being presented as a synodal process. Only she will not be different, she will cease to exist, at least in those regions, where false prophets are setting the tone.” Cardinal Müller may have been alluding to the “synodal path” as it has been launched by the German bishops this March, during which matters such as celibacy and the Church's sexual morality are under scrutiny.

At another point in the interview, the Cardinal referred to the German bishops – or, more specifically, to Cardinal Reinhard Marx – when he commented: “It cannot be that, in passing, a counselor [of the Pope] can extract from the Pope the concession that each bishop decides that Christians who are not in full communion with the Catholic Church – except in danger of death and in the presence of required spiritual preconditions – may receive Holy Communion.” The prelate insists that “the individual bishop cannot rescind the binding doctrinal teaching, case-by-case, [instead] he can only determine whether the conditions are met.”

Cardinal Müller also said in the interview that while he has “defended” Pope Francis' apostolic exhortation on marriage and the family, Amoris Laetitia, he nevertheless considers “some re-formulations of the Church's teaching to be in need of clarification.”

“I have also, after my time as the Prefect of the Congregation for the Faith, defended Amoris Laetitia,” he said, adding: “I welcome that the Pope approaches also Catholics in irregular marital relationships in a pastoral manner, but I consider some re-formulations of the Church's teaching to be in need of clarification.”

Further attempting to explain the nature of Pope Francis' documents, he said: “It is often with his documents that those people who prepare them might be his confidants, but they have neither by virtue of their office nor theologically, the expertise, and they burden themselves with a grave guilt by causing irritations which very much damage the Pope and the papacy.”

In a striking sentence, Cardinal Müller commented: “It is a sign of intellectual and moral decay when those who confess the Catholic Faith are being accused – by those who disfigure it [the Faith] – of disobedience toward the Pope and the bishops and of instigation of strife and schism.”

Finally, the interviewer Regina Einig raised the question of Pope Francis' Abu Dhabi statement, which contains the phrase that the “diversity of religions” is “willed by God.”

Although Cardinal Müller supports Pope Francis' work for a “peaceful living together” among people with different religions, he nevertheless states: “It must, however, be clear that we agree with the Muslims de facto in the faith in one single God. But, with the supernatural Faith, which exists due to Revelation and Grace, we Christians also believe in the one and true God in the name of the Father, and the Son, and the Holy Ghost.” Here, the Holy Trinity is not just an “accidental addition to the general monotheism,” the prelate adds, “but is the substance of the salvific Faith of the Christians in the One God and Creator of the world and of man.” Religion itself as a “moral virtue,” he explains, is part of “human nature that is oriented toward the adoration of God.”

“But the concrete myths and their rites of the historic 'religions' are not willed by the God of Abraham and by the God and Father of Jesus Christ as an expression of His self-revelation for the salvation of man, but, at the most, only as a preparation for Christ's Gospels,” he added.

Here, the German prelate added: “A better theological preparation surely would have avoided many misunderstandings here.” Such a declaration of agreement with “a non-Catholic authority” is also “not part of the mandate of the Magisterium, faithfully to preserve the Catholic Faith.”

“A Catholic professor who academically examines this joint declaration [of Abu Dhabi] and who criticizes it – justly or unjustly – may by no means be censored. That would be a stretching of the Church's authority and a glaring example for clerical abuse of power,” he said.