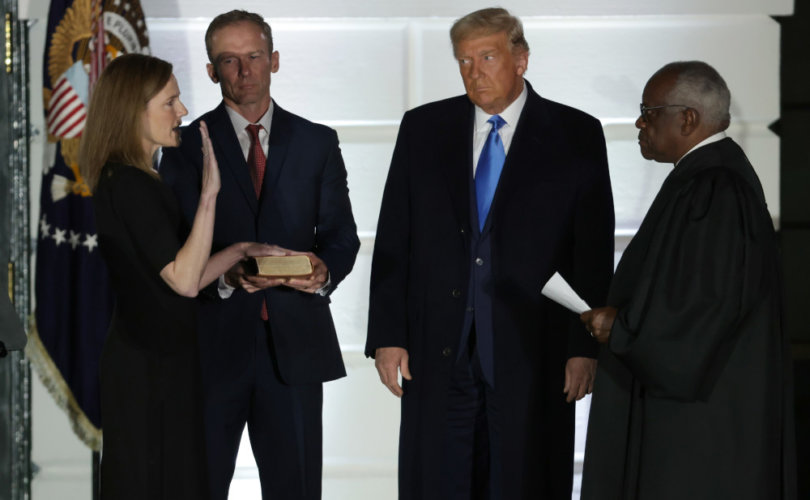 (LifeSiteNews) – According to the leaked draft of the Alito opinion, five of the justices of the Supreme Court have agreed that Roe v. Wade must go. Nearly a half century after this infamous decision was handed down by their predecessors, the new conservative majority is going to send the matter back to the states.

Everyone has long recognized that Roe, in the words of my late friend Judge Robert Bork, “was a raw act of judicial tyranny.” It invented a “right” to abortion out of whole cloth. Yet the Leftists of the Roe v. Wade had succeeded in quietly installing so many of their own on the highest court in the land that the vote was 7 to 2 in favor of the blatantly unconstitutional opinion.

They would not have succeeded were it not for the inattention of Republican presidents. The story of Harry Blackmun, who wrote the poorly argued opinion, is a perfect illustration of this. President Richard Nixon was unabashedly pro-life, yet he nominated Blackmun to the Supreme Court on the advice of Republican senators who assured him that Blackmun was a “conservative.” After Roe came out, Nixon complained that he had been misled. Indeed he had been. Blackmun turned out to be one of the most Leftist justices in American history.

The Left, knowing that most Americans are culturally conservative, pro-life, and pro-family, has for a century operated on the understanding that the easiest way to advance their agenda is through the courts. They carefully vet their candidates, making sure that they are judicial activists who are committed to their radical agenda. That’s how they surreptitiously achieved their initial 7 to 2 majority.

They have been aided over the decades by moderate Republican senators—RINOs, if you will—who refused to abide by the Party’s pro-life platform. Instead, RINOs like Susan Collins of Maine or Lisa Murkowski of Alaska have repeatedly crossed party lines to vote for even the most radically pro-abortion nominees put forward by Clinton and Obama, even when those nominated were obviously unqualified.

Until recently, supposedly pro-life presidents simply did not pursue control of the federal court system with equal vigor. It was not just that they did not impose a pro-life “litmus test” on their nominees; they barely pressed them on the issues at all. Instead, they were content to simply accept bland assurances from their nominees that they would abide by the US Constitution.

Certainly the two Bushes, both Republicans and both at least nominally pro-life, were careless in their nominations, if not clueless. They often sought to avoid controversy by nominating supposed “moderates” to the court. That’s how we got chameleons like Justice David Souter, nominated by the first Bush, who quickly joined the progressive wing of the court. And it was son George who put Chief Justice John Roberts on the court. Although we were assured that Roberts was pro-life, he has repeatedly betrayed the unborn in the years since, and is now reportedly prepared to do so again: he is not joining the majority in overturning Roe v. Wade.

As far as Senate Republicans, they, too, have all too often proven unwilling to hold the line. No Democrat nominee to the federal bench, much less to the Supreme Court, has ever been greeted by the Republicans with the kinds of vicious personal attacks that the Democrats routinely unleash on pro-life conservative nominees.

Some may remember that when President Reagan nominated Judge Robert Bork to the Supreme Court, he was so brutally attacked by the Party of Abortion that his surname become a byword for character assassination. When the Senate failed to confirm him, people said that he had been “Borked.” They tried the same tactics on Justice Clarence Thomas a couple of years later. Thomas managed, with grace and character, to survive the Democrats attempted “hi-tech lynching,” as he called it, and won confirmation.

What ultimately changed the composition of the Supreme Court and put us on the cusp of a historic victory was—us. Through disappointment after disappointment, we in the pro-life movement never gave up.

More and more and pro-life groups were organized at the state and local level as the years passed, and hundreds of laws restricting abortion were passed by state legislatures and signed into law. The annual March for Life in Washington, D.C. continued to attract more and more marchers with each passing year and quickly became the longest as well as the largest continuing public demonstration in U.S. history.

As we mobilized and marched, we began demanding that self-declared pro-life politicians act on their campaign promises. We primaried and defeated RINOs who were unwilling to fight for the unborn. We rewrote the platform of the Republican Party to put it squarely behind the cause of life. And over time we transformed the Republican Party – which at the time of Roe’s passage was deeply divided on the question of abortion — into the Party of Life. And we never, ever, accepted the idea that Roe was “settled law.”

We created, in effect, a pro-life litmus test for every local, state, and federal office, up to and including the presidency. From President Reagan on, no Republican could hope to win his party’s nomination for president without convincing the pro-life movement that he was pro-life.

That’s why, when President Trump announced that he was running for the Republican nomination, one of the first things he did was reach out to the pro-life movement. Then in July 2016 he invited several hundred of us to New York City to ask for our support, and to find out what actions we would expect him to take on the behalf of the unborn if he were elected president. At the very top of our list of pro-life priorities, we made clear to him, was putting pro-life judges on the federal bench and, if the opportunity arose, on the Supreme Court. He assured us that he would.

Trump kept his word. For four long years he nominated hundreds of pro-life federal judges who will be on the court for decades to come. The radical left did their best to “bork” many of his nominees, but they failed in almost every instance, in large part because Trump not only made excellent choices, but backed them to the hilt. The attacks reached a crescendo with the attempted personal destruction of Brett Kavanaugh, but Trump never wavered.

Trump’s Supreme Court nominees — Neil Gorsuch, Amy Coney Barrett, and Brett Kavanaugh — joined by Justices Clarence Thomas and Samuel Alito, comprise the Magnificent Five who will soon release their historic opinion. It is no accident that all of them are serious Catholics, who understand that every child is a gift from God and that abortion is a great evil.

We have already had a preview of the hysterics that will greet the end of Roe v. Wade in the United States. It is no exaggeration to say that, for many on the Left, the sacrifice of unborn children is the functional equivalent of a sacrament in their secular humanist religion.

And now they are about to lose one of their primary weapons in their war against the unborn, Roe v. Wade.

This is a time to celebrate and to realize what this means: We can beat the radical Left in this country if we organize and stay focused. We can beat them at the ballot box and we can beat them in the courts. We can stop the Left from stealing elections and ensure election integrity. We can drive the transgender mania out of our public schools and fire Leftist teachers who try to groom our kids. We can stop the Critical Race Theory insanity which condemns people as racist because of the color of their skin.

The radical Left is the sworn enemy of marriage, family, freedom and Life itself. But now, because our great victory over Roe v. Wade, we know we can beat them. And for God, family and country, we will.

Steven W. Mosher is the President of the Population Research Institute and the author of “Bully of Asia: Why China’s Dream is the New Threat to World Order.”