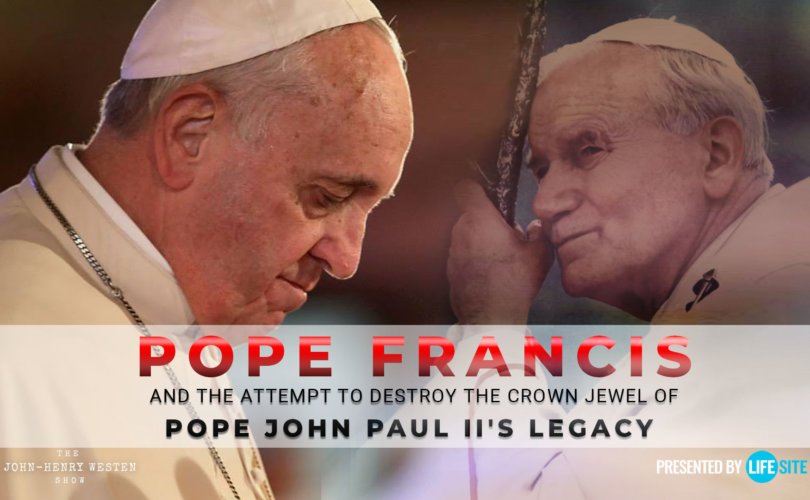 August 20, 2019 (LifeSiteNews) — Diane Montagna is LifeSite's Rome correspondent. Before joining LifeSite, she translated papal addresses under the pontificate of Pope Benedict XVI for Zenit News Agency. She has also served as a translator for the English edition of the Vatican newspaper, L’Osservatore Romano. In this episode 22 of the John-Henry Westen Show, she talked to me about the controversy surrounding the “purge” taking place at the John Paul II Institute for Marriage and Family in Rome.

Diane and I began our conversation by discussing how just two days after Cardinal Carlo Caffarra died in September 2017, Pope Francis issued a motu proprio that re-founded the institute to carry on the work of the recent Synods on the Family and Amoris Laetitia. Cardinal Caffarra had previously served as the president of the institute and was one of four signatories to the dubia.

With the approval of new statutes on July 18, 2019 (a month in Rome generally dedicated more to rest than to work), a letter was sent by Grand Chancellor, Vincenzo Paglia, to all JPII professors suspending them. Diane said that key tenured professors, including Monsignor Livio Melina, who succeeded Cardinal Caffarra as president of the Institute for a decade and held the Chair of Fundamental Moral Theology, was dismissed, along with Fr. José Noriega, who held the Chair of Specific Moral Theology.

Paglia, Diane told me, doesn't even have a doctorate. She was also puzzled by the timing of approval of the new statutes. So far, “Pope Francis has been silent,” she said. Significant changes were also made to the curriculum and staff. Paglia's decision has “provoked considerable controversy and outrage,” she said. Several professors, including Msgr. Melina, have spoken openly to the media. Over 250 students and almost 500 alumni (supported by more than 900 sympathizers) sent a letter to Institute President, Monsignor Pierangelo Sequeri, and to the Grand Chancellor, Archbishop Vincenzo Paglia, expressing deep concern.

Brian Limas is a student at the John Paul II Institute and was one of the young people who raised their voice over the new direction taken by Archboshop Paglia. He appears in this episode via video and explains that the institute is essentially being destroyed. The new statutes “undermine the purpose of the institute,” which was originally founded to defend Humanae Vitae, he said.

“I don't expect” this story to die down anytime soon, Diane told me. “It looks bad for the Catholic Church [and] to the wider academic community.” Diane said that if this sort of cleaning out can be done at the JPII Institute, then what does that mean for seminaries and elsewhere in the Church where they are only trying to interpret documents like Amoris Laetitia in light of tradition? She also talked about how Pope Benedict met with Msgr. Melina and that he expressed “solidarity” with him, which is the first time Benedict has injected himself into something directly related to Pope Francis.

Diane said that her interviews with Cardinal Caffarra beore his death were about how Sr. Lucia warned that the final battle over the family is taking place now. “We need to turn to Our Lady, to prayer,” she told me. “We need to pray for the institute, for Archbishop Paglia, Pope Francis and everyone involved.”