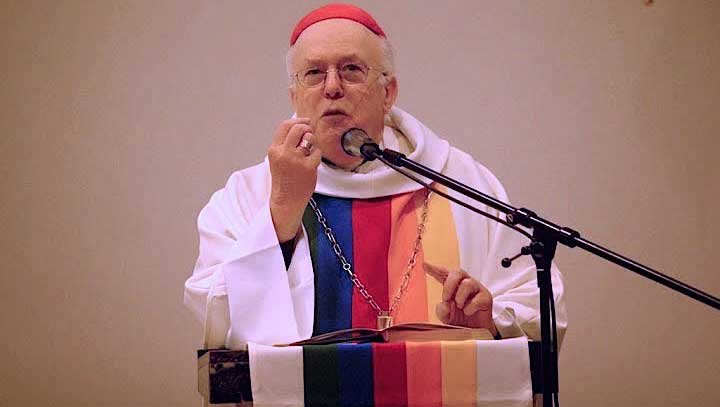 April 16, 2019 (LifeSiteNews) – One of the most problematic aspects of Pope Francis’ pontificate has been his promotion and support for prelates who undermine Church teaching.

There are numerous examples, but today on Episode 5 of The John-Henry Westen Show, I’m going to talk about one of the most disturbing and prominent cases.

Cardinal Godfried Danneels died on March 14 this year. We must pray earnestly that God has mercy on his soul, because he is very much in need of such prayers.

Cardinal Danneels should have been one of the most controversial prelates in the Catholic Church, not only for his opposition to Catholic teaching, but especially in our times because he was caught on tape in 2010 telling a victim of pedophile sexual abuse by a bishop friend of his not to go public with the abuse. But, as I explain on today’s show, Cardinal Danneels was in the limelight with Pope Francis.

The John-Henry Westen Show appears every Tuesday. It is a short weekly commentary on the most important news developments in the Church and culture. We are beginning with a series laying out the hard evidence for our concerns with Pope Francis.

Here are the topics we’ve covered to date:

While some have suggested that pointing out errors of the Pope even when the faith is endangered is not permissible, the former head of the Vatican’s Congregation for the Doctrine of Faith, Cardinal Gerhard Mueller, told us: “The primacy of the Pope is being undermined by the sycophants and careerists at the papal court and not by those who counsel the Pope in a competent and responsible manner.”

Let’s start with the sign of the cross: In the name of the Father and the Son and the Holy Spirit. Amen.

Cardinal Godfried Danneels died on March 14 this year. We pray earnestly that God may have mercy on his soul. In truth he is very much in need of such prayers.

The Cardinal should have been one of the most controversial prelates in the Catholic Church, especially in our times, because he was caught on tape in 2010 telling a victim of pedophile sexual abuse by a bishop friend of his not to go public with the abuse. But Cardinal Danneels was in the limelight with Pope Francis.

At his death Pope Francis sent a telegram commenting on Cardinal Danneels saying:

This zealous pastor served the Church with dedication, not only in his diocese, but also at the national level as president of the Conference of Bishops of Belgium, while being a member of various Roman dicasteries. Attentive to the challenges of the contemporary Church, Cardinal Danneels also took an active role in various Synods of Bishops, including those of 2014 and 2015 on the family.

Those words of the Pope are very difficult to reconcile with Cardinal Danneels, since he opposed the Church’s teaching on homosexuality. You can see him here dressed in a so-called rainbow stole. In May 2013 the Cardinal expressed his support for homosexual unions to Dutch language newspaper De Tijd. He said: “I think it’s a positive development that states are free to open up civil marriage for gays if they want.” The French language paper L’Echo also quoted the cardinal saying that the French people should “obey the law” and not oppose “gay marriage.”

But despite this reputation, as you can see in this video footage, Cardinal Danneels was one of the few Cardinals Pope Francis chose to come out on the balcony with him at his election to the pontificate.

Also in 2015, two Belgian politicians reported to the media that Cardinal Danneels tried to persuade King Baudouin to sign the 1990 abortion bill into law.

But apart from Cardinal Danneels’ dissent on Catholic teaching on life and family, his notorious reputation as a pedophile bishop protector should give anyone, even non-Catholics, pause.

Let me quote to you from the Reuters journalist who went through those horrible secretly taped recorded sessions between Cardinal Danneels and the sexual abuse victim who was abused by a bishop friend of Cardinal Danneels from the time he was 5 till 18 years old.

In the published transcripts of that meeting,  the unnamed victim, now 42, told Danneels he could no longer keep quiet about how his uncle, Bishop Roger Vangheluwe, sexually abused him between the ages of 5 and 18. He says Vangheluwe could not remain in office and the case must be reported to the Church hierarchy, but he doesn’t know how to do this.

“What do you really want?” asks Danneels, cutting the victim off by saying he already knows the story and doesn’t need to hear it again. When the man says “I give you the responsibility, I can’t decide … you should do what you think should be done, because I don’t know how this whole system works.”

“Do you want this to be made public?” the cardinal asks. “I leave that to you,” the victim responds. Then Danneels begins his effort to convince him to keep the lid on the problem: “The bishop will step down next year, so actually it would be better for you to wait.”

“No, I can’t agree that he takes his leave in glory, I can’t do that,” the victim replies.

At one point, Danneels ducks and weaves trying to fend off the victim’s pleas to inform the Church hierarchy about Vangheluwe’s misdeeds.

At another point, Danneels suggests the victim admit his guilt and ask for forgiveness. “Who do I have to ask forgiveness from?” the surprised man asks.

When Danneels suggests the victim may be trying to blackmail the Church, the man pleads with him to take up this case, saying there has to be someone in the Church who can handle it because he cannot bring himself to expose his uncle on his own. “We were forced to get married by him, our children were baptised by him, how can I explain this to them?” he asked. “Yesterday I said to my oldest son, look, this is what happened to me. They must know what has happened.”

How indeed could Pope Francis be associated so closely with Cardinal Danneels? Believe it or not, Cardinal Danneels was one of the Cardinals who conspired to elect Pope Francis, a truth that comes out in Danneels’ own authorized biography. He even did a TV show promoting the book where he explained he was part of this group called the St. Gallen group or ‘mafia’, as they called themselves, which fought against Cardinal Ratzinger and worked for Cardinal Bergoglio’s election even in the 2005 conclave. But that’s another story.

Remember, our motto at LifeSite is Caritas in Veritate – the truth in love. And so it’s out of love for the Pope that we want to call him to annunciate the truth and correct the errors he has taught which have harmed the faithful.

For LifeSiteNews, I’m John-Henry Westen. Remember please to sign up to our email list for this show and encourage your friends to do the same.

Subscribe HERE to receive an email notification every time we publish a new episode of The John-Henry Westen Show.