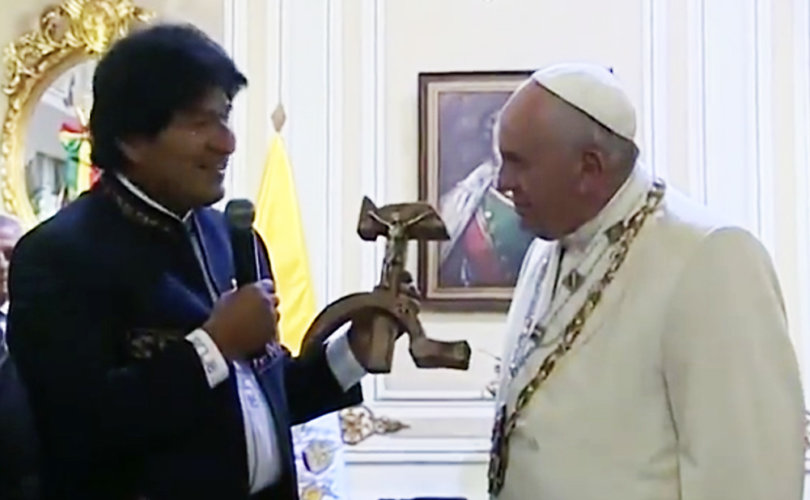 April 23, 2019 (LifeSiteNews) – The Church has condemned Communism unequivocally, but Pope Francis has been dangerously ambiguous in his remarks and acts related to this dangerous ideology.

Today, on Episode 6 of The John-Henry Westen Show, I talk about Pope Francis’ record on Communism and why it is such a stark departure from the Church’s authentic teaching.

The John-Henry Westen Show appears every Tuesday. It is a short weekly commentary on the most important news developments in the Church and culture. We are beginning with a series laying out the hard evidence for our concerns with Pope Francis.

Here are the topics we’ve covered to date:

Transcript: What’s up with Pope Francis and Communism?

Remembering that it’s out of a loving concern for Pope Francis that we expose the truth, let’s begin with a short prayer. In the name of the Father and of the Son and of the Holy Spirit.

Everybody my age and older will remember Pope St. John Paul II’s famous visit to Nicaragua in 1983 where he publicly chastised communist priest Ernesto Cardenal who was into Liberation Theology and involved in the revolutionary Sandinista government that was restricting the Church.

In February this year, without any sign of public repentance on the part of Ernesto Cardenal, Pope Francis lifted a 1984 canonical sanction imposed by Pope St. John Paul.

As recently as 2015, Cardenal praised Pope Francis while condemning both Popes Benedict and John Paul II. In an interview with El Pais, he said: “The two popes prior to Francis were disastrous popes, who made the church retreat by centuries.”

Here are photographs of the bishop who visited Cardenal in hospital and the copy of the papal nuncio announcing the lifting of sanctions against Cardenal. It reads in part: “The Holy Father has benevolently granted the absolution of all the canonical censures imposed on the Reverend Father Ernesto Cardenal,…”

It’s a dangerous thing for the soul of Cardenal who’s health is failing at 94 years of age since he’s now receiving a possibly false sense of security about being reconciled with the Church without any repentance. And if, God willing, he’s repented privately, it’s a danger for the Church since the Pope’s actions are causing grave confusion.

Pope Francis’ record of confusion around communism is much more elaborate than the Cardenal case alone.

Headlines in newspapers around the world have reported the Pope’s controversial statements about Communism.

In July 2014, the Pope said “Communists are closet Christians.”

In October 2014, he said “there are those who think that the Pope is [a] communist.”

In a November 2016 interview with La Republicca (a Marxist-leaning newspaper in Italy), the Pope said “Communists think like Christians.”

In a book-length interview, called Politics and Society: Pope Francis Speaks with Dominique Wolton, Pope Francis revealed that a Communist woman had a great impact on his political thinking. “She taught me to think about political reality,” he says of Esther Ballestrino De Careaga. “I owe so much to this woman.”

Francis brought up Bellastrino when author Dominique Wolton asked him about women who were a major influence in his life. “She was communist,” Francis readily admitted, adding “she gave me books, all Communist.”

But what was likely the most visually disturbing element of the Pope-created confusion around communism was his acceptance of a hammer and sickle crucifix from Bolivian President Evo Morales. The sight caused great pain to many Catholics in Latin America who have suffered under communist rule.

While some suggested that the Pope disdained the communist crucifix when he received it, in an interview on the plane as he flew home, the Pope said he was not offended by it.

The hammer and sickle emblem was born in the brutal Russian Revolution.

To comprehend the gravity of the confusion generated by this flirtation with communism we must appreciate the Church’s teaching against communism. Our Lady of Fatima warned in 1917 that Russia would spread its errors throughout the world. The Fatima visionary Sr. Lucia herself called communism “the greatest heresy to appear at any time in the world,” which was “carrying its errors to the ends of the earth.”

Pius IX, in 1846, spoke of “that infamous doctrine of so-called Communism which is absolutely contrary to the natural law itself, and if once adopted would utterly destroy the rights, property and possessions of all men, and even society itself.” Pope Leo XIII, in his Encyclical Quod Apostolici Muneris, defined Communism as “the fatal plague which insinuates itself into the very marrow of human society only to bring about its ruin.”

Pope Pius XI in his encyclical Divini Redemptoris on atheistic communism calls it a “satanic scourge” which “conceals in itself a false messianic idea.”

And Pope Pius’s instruction on communism shows how far our own nations have come in adopting communism without even knowing it.

You see from the Church’s teachings against communism how far our own societies have gone down the communist path.

To close we’ll turn to Cuba.

After meeting with Pope Francis privately at the Vatican in July 2015, Fidel’s brother and current Cuban dictator Raul Castro said famously, “If the Pope continues talking like this, I may return to the church and start praying again.” “I am not joking,” he added as reporters laughed.

What was Castro so thrilled with? We may get a hint from another communist atheist who has spent much time with the Pope and is enamoured by him. Eugenio Scalfari, the founder of the Marxist La Republicca in Italy to whom Pope Francis has given many exclusive interviews, relates that he is delighted with Pope Francis since he sees in him a revolutionary.

Let’s quickly review some facts about the communist revolution in Cuba.

Being a devoted communist, Fidel Castro was possessed with a hatred of religion. In Cuba, like everywhere else, communists launched their standard war on faith. From country to country, no ideology has so consistently and viciously attacked Christianity like communism — starting with the Bolsheviks in 1917 and resounding throughout the century ahead. As Mikhail Gorbachev put it, communists launched a systematic “war on religion.”

Cuba was no exception. From the moment that Castro took hold in January 1959, churches were in trouble. The regime quickly launched a propaganda campaign against the faithful, describing Catholics as “social scum.” By the late 1960s, Christmas was banned on the island. Churches were shut down. Priests and their parishioners were silenced, arrested or placed under tight surveillance, with every word of every service or homily monitored by government church-watchers infiltrating the pews. Any criticism, especially of the Marxist regime, was very dangerous. One could not be a member of the Communist Party in Cuba (the only party legally permitted, including for any government jobs) without professing a belief in atheism.

To appreciate the gravity of the assault by Castro, we need to first appreciate the historical roots of the faith in this country that was once more than 90% Roman Catholic. People were proud of it, and they practiced the faith naturally and vigorously. In fact, the island was once a pilgrimage center.

And while Popes John Paul II and Benedict also visited Cuba, there was never a hint of praising the revolution. At the Vatican under Pope Francis however there was more than a hint. The official website of Vatican News published on January 1, 2019 an article in recognition of the 60th anniversary of the Cuban revolution. The Vatican News article, in Spanish, was titled “Cuba celebrates 60th year of the Revolution.” It read, “The historic anniversary was celebrated with an official ceremony in which the former chief of state and Communist Party leader Raul Castro participated in addition to current President Miguel Díaz-Canel.” It was penned by María Cecilia Mutual.

On January 2 the Cuban National Circus was performing for Pope Francis at the Vatican, where jugglers, contortionists, and clowns performed. Speaking in Italian, Francis said, “I want to say hello and thank the artists from the Cuban circus.”

The following day the Vatican News article disappeared from the Vatican website after Cuban media began to comment on its peculiarity. Panam Post, for example, noted that the revolution compelled at least one-sixth of Cuba’s people to escape the island at the risk of their lives. CubaNet observed of the Vatican’s report: “The text does not mention the enrichment of the Castro leadership at the expense of the Cuban people and neglects to mention, curiously, the regime’s murderous persecution of Catholics.”

Following the revolution in 1959, scores of Catholic activists were tortured and lost their lives in Cuban prisons. Some cried out “Long live Christ the king!” before firing squads killed them. In addition, Catholic seminaries and other religious institutions were seized by the Marxist government.

In all of this show regarding communism you’ll notice I haven’t yet mentioned the scandalous Vatican deal with the communist Chinese government. And it’s because it’s so big, it’s another story…

Remembering our motto Caritas in Veritate, the truth in love, let us pray together for Pope Francis to end the confusion he has sown. Let us be confident in Christ and His control over His Church recognizing that in allowing us to suffer through this agony of faith, He permits His Body the Church to suffer with Him our Head. It is a joy, it is an honor, and privilege to be a Catholic, to love this One, True Faith and to strive to give your life to it.

For LifeSiteNews I’m John-Henry Westen. Remember to subscribe to the email list for this show and May God bless you.