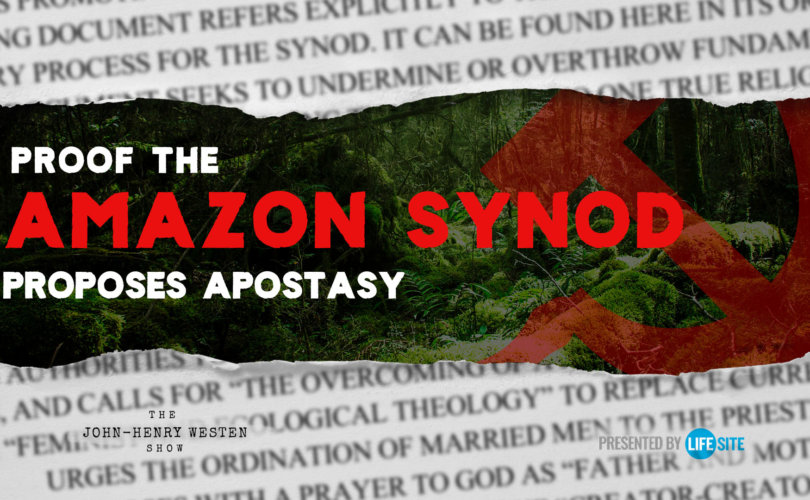 October 2, 2019 (LifeSiteNews) — In this episode 29 of The John-Henry Westen Show, LifeSite's Latin American correspondent Matthew Hoffman discusses what he calls the “heretical” working documents being used at the Pan-Amazonian Synod. Matthew recently discovered the existence of a document produced by radical liberation theologians for the synod that is intended to overthrow Catholic doctrine in a variety of areas.

Matthew and I talk about that document and the Synod itself. His conclusion is that a new religion is being imposed on the Church and that an “apostasy” may occur at the Synod. A sort of “eco-theology” is being installed into the Church, he says. It will put man at service of the natural world, and not the other way around — as God intended it. He also believes there is going to be an “all-out assault on the hierarchical priesthood” and that some attendees want women to be sacramentally ordained deacons.

Matthew believes the Amazon region was deliberately chosen to introduce these radical changes so liberal clergy across the world could point to the region and be able to look at the “precedent such that the exception will become the rule.” They would then implement the results of the Amazon Synod in their own countries.

Liberation theology in Latin America has led to the loss of faith in the region and the growth of Evangelicalism and Pentecostalism, Matthew also told me. Liberation theology is very much related to socialism, he said. It “wants us to forget” about life being primarily about growing in holiness and being in communion with God. Instead, it makes us “focus on secondary issues” like economics and the environment. It “turns Catholicism into an ideology.”

Matthew states that Pope Francis is aware of all this but he is still pushing ahead. “He understands how grave it is…he’s heard the words of the cardinals…and he’s going forward with it.” Matthew says that previous popes have been condemned but with the situation under Pope Francis, “it’s never been this bad…this really is unprecedented.”

Despite that, the crisis in the Church is giving Catholics a “wonderful opportunity” to know their faith and to show that Catholicism is not a religion where the laity blindly trust clergy who may be leading them astray. The Church will endure, he said, no matter what. “Christ made that promise.”