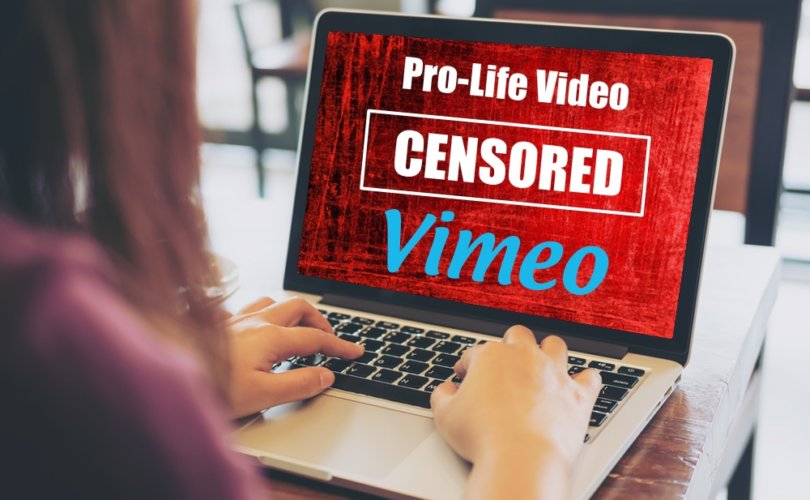 NEW YORK CITY, May 31, 2017 (LifeSiteNews) — Video hosting services, including Youtube, Facebook, and now Vimeo are on a witch hunt against the latest undercover Planned Parenthood video, deleting instances of it wherever they find it.

The shocking video put out by the Center for Medical Progress (CMP) shows what really happens on the inside of a secretive abortion conference run by the National Abortion Federation.

When LifeSiteNews had its copy of the video deleted from Youtube and Facebook last week, it uploaded the archived footage to Vimeo late Friday night. Within 24 hours, Vimeo deleted the video without providing a reason.

After LifeSiteNews asked for an explanation, Vimeo’s support team member Sean McGilvray replied by email that the video was “removed…for being a violation of our Terms of Service.”

Asked for further details, McGilvray responded that the CMP video was “malicious.”

“Taken as a whole, the underlying purpose of this video appears to be to name and shame the individuals recorded therein in a malicious attempt to harm their reputation,” he said.

McGilvray also suggested that a federal judge’s order to lawyers representing CMP’s David Daleiden that they remove the video from their Youtube channel affected Vimeo's decision as well.

“Given the judicial orders in this ongoing case, there is clear cause not to publish the information,” he said.

McGilvray then said that even if the video weren’t “malicious” or part of a legal case, Vimeo would still delete it.

“Even if all of the foregoing was not true, it is our determination that the material presents a clear and convincing risk of harm for the individuals in the video given the sensitive subject matter,” he added.

McGilvray also took issue with LifeSiteNews uploading a video created by another organization.

While Vimeo is a private organization that is legally entitled to decide what content it keeps or deletes on its site, it has in recent years repeatedly censored content from a pro-life and pro-family perspective.

In 2012 Vimeo deleted over 200 videos from a Canadian conservative news outlet after it published two interviews about the pro-family organization MassResistance.com being sued by a homosexual activist and registered sex offender. Vimeo said the interviews were “removed for violating our Guidelines.” The videos were eventually restored after the news outlet fought back.

Earlier this year Vimeo removed 850 videos from Restored Hope Network, a Christian network of ministries to homosexuals who are looking for healing. Vimeo told Dr. David Kyle Foster, a former homosexual and director of Pure Passion Ministries, that his videos “harass, incite hatred or depict excessive violence,” a claim he called “patently false and without a shred of merit.”

American Family Association ran a petition signed by 43,000 asking Vimeo to reverse its decision, but to no avail.

“They’re essentially against the Gospel itself and any arena that the Gospel addresses that they disagree with, which would include abortion and homosexuality. It’s ultimately a rejection of the Scriptures,” he said.

Vimeo appears to have a double standard when it comes to deciding which videos to delete. While its terms of service state that users “may not upload” any video that “contains sexually explicit content or pornography,” searches of keywords on the video platform such as “lust,” “rape,” and even “teen rape” returns altogether thousands of salacious results.

Foster said that any other reasons Vimeo might come up with for deleting the CMP video are “just making excuses” to hide their anti-Gospel bias.

Troy Newman, President of Operation Rescue, said Planned Parenthood and its supporters are trying to “censor all of the Center for Medical Progress's videos, and it may not be long before they disappear from the internet for good.”

“If that happens, Planned Parenthood will almost certainly get away with selling aborted baby body parts to the highest bidder,” he said.

Operation Rescue is offering the complete series of CMP’s investigative videos on DVD from its website.