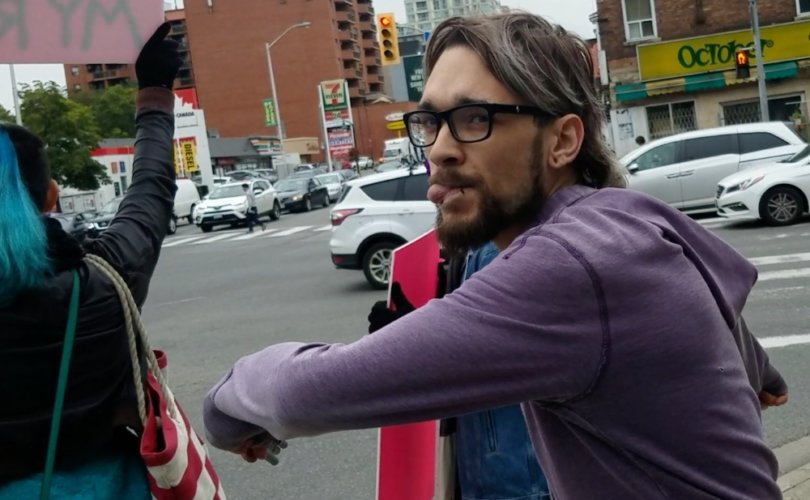 October 4, 2018 (LifeSiteNews) – The video of a bearded man roundhouse kicking a young pro-life woman at Life Chain has spread across the Internet like wildfire, helped along by retweets from dozens of outraged journalists and commentators—including Ben Shapiro and Jordan Peterson. The man was identified as one Jordan Hunt in short order, and he has now been fired from his job and is the subject of a police investigation.

I’ve seen a lot of shock on social media over the deliberate, calculated violence by an abortion supporter directed at a peaceful pro-lifer. I wish I could say I was surprised, but I’m not. The sad fact is that violence by abortion supporters against pro-lifers has been the norm for years. And when I say it has become the norm, I mean that there have been well over a dozen documented assaults on pro-lifers this year alone, and Joyce Arthur of the Abortion Rights Coalition of Canada has engaged in overt victim-blaming by claiming that those who carry pro-life signs “provoke” people to assault them. Pro-life women who get assaulted? They had it coming, shrug the abortion activists.

And when I say that pro-life people are being assaulted, I don’t just mean people throwing drinks at us—although that happens, too. I mean girls getting shoved. I mean an abortion advocate repeatedly hitting a pro-life activist with a cane. I mean pro-lifers getting threatened with sexual assault, baseball bats, and even knives. A few years ago, in fact, a pro-life woman was hospitalized after being attacked by a knife-wielding abortion advocate at Life Chain in Toronto—the same event that Jordan Hunt attacked earlier this week. Most pro-lifers could tell you personal stories about violence from abortion activists.

In a show of profound cowardice and hypocrisy, it is often the young female activists that are attacked—my sister has a restraining order against a man who showed up at one of our displays on his Harley, grabbed one of our cameras, and threatened violence. One of my female friends in Toronto was punched by a middle-aged man simply for sidewalk-chalking pro-life messages. Verbal abuse—ranging from the “c-word” to insults so vile I will not repeat them here—are so commonplace that many of us don’t notice them anymore.

Simply put, this is something we have come to expect from abortion supporters. If you do pro-life work, it comes with the territory.

In many ways this is not surprising. Violence is fundamental to the abortion worldview—abortion is essentially responding with violence to the presence of an inconvenient human being. That is precisely how many abortion supporters respond to the pro-lifers advocating for those helpless pre-born children, as well. The reason they so often get away with it is because they have the media and the politicians covering for them with ridiculous and blatantly false narratives about pro-lifers harassing women—although they rarely manage to produce a single example of this. If pro-abortion protesters experienced what frontline pro-life activists go through in a single week, it would be nonstop headline news on every major network, with politicians promising to take swift and immediate action.

I’m glad that Jordan Hunt managed to single-handedly draw so much attention to the mindset of people like him—that violence is justified when people are inconvenient. He is not the only one. In fact, he is not the only one who has assaulted a pro-life activist in Toronto in the past month. Pro-lifers face people like him on the street regularly in order to speak for the pre-born babies who are killed by abortion every single day.

It is because we get to see babies get saved and hearts get changed that people like him will never stop us from doing our work.