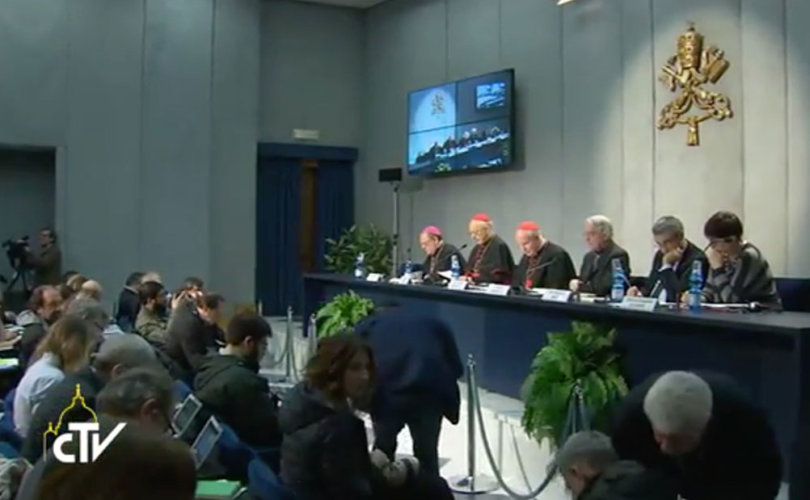 April 8, 2016 (LifeSiteNews) – Here we go again, having to publish unpopular views about yet another action by Pope Francis, a pope more heavily praised by the secular world than any other in history, it seems, and a pope  who is especially lauded by all Catholic Church progressives and other progressives such as Barack Obama and Bernie Sanders. This has happened so often now that we at times feel like voices crying in the wilderness whom relatively few understand.

John the Baptist, was the person whom that description of a “voice in the wilderness” was applied to in scripture. He was compelled, for love of God and the truth, to publicly castigate King Herod for divorcing his wife and unlawfully taking Herodias, the wife of his brother. God’s Ten Commandments simply did not permit it.

Herod did not want to hear what he knew was the truth, but worse, his new, illicit wife and her daughter, perhaps comparable to today’s radical feminists, wanted the Baptist’s head for his boldness in discomforting them – and they got it.

So, we are treading on sensitivities that cause ferocious reactions from those who have much invested in a loosening of the Catholic Church’s over 2,000 years’ old moral teachings.

Those moral absolutes have been nothing less than Jesus Christ’s – God’s – teachings – for all time.

The Catholic Church is understood to be the most influential and last bastion in the world still in the way of the New World Order in which all those supposedly out-of-date teachings can no longer be permitted to be so absolute, if even taught at all.

As we are now seeing in so many stories on LifeSite, there are many things that the world insists we no longer have any right to even say anymore. That is because they upset certain people. And that is now considered to be a crime punishable by hateful harassment, firing from jobs, large fines and even criminal charges. Truth is no longer considered a defense

It is said that the world has dramatically changed and history and Natural Law no longer apply. Everyone has to quickly move along and get with the modern world – population control, the climate change agenda, the sexual revolution and a complete revamp of the world's economic systems to facilitate forced transfers of wealth. People are supposedly no longer capable of adhering to the demanding, old-fashioned, traditional Catholic religion.

When we received a copy of the “The Joy of Love”, a quick read revealed of course many praiseworthy, strong and inspiring affirmations of Catholic teachings, but it also revealed more than a few clearly problematic statements – time bombs, that will certainly be exploded by those who have been anticipating such opportunities.

Having now observed the reactions and outcomes of many similar Francis items, it has become almost Second nature to understand how certain ambiguous, imprecise, incomplete or oddly worded statements will play out in the real world.

The main analysis emphasis for truly honest and faithful reporters has become, what will those who read or hear these statements and documents actually do with them? What will be the main focus of reactions and the actual impact on the world?

That is the most important effort that should be undertaken, in our opinion, related to any of these documents and statements by Pope Francis. That is, the overall content is less important than the actual impact on the faith, on culture, on the world, which might result from only small parts of the content or from one or two sentences in a dialogue.

In the third year of the Francis pontificate, it has become fairly easy to predict these outcomes, because the same patterns have repeatedly occurred.

The ambiguous statements, the statements that do not contradict Catholic teaching, but which are also missing necessary related hard teachings and essential clarifications to questions that are certain to be asked – those are the ones that always get the most attention, such as, “Who am I to judge?”

They are interpreted to have finally opened previously always closed doors. They generate the most reaction and are cited all over the world by the media, by progressive Catholics, and by an astonishing number of non-Catholics, to justify behaviors and changes that totally contradict fully explained, related Catholic teaching.

See the fascinating collage of many news headlines on One-Peter-5 that provides evidence of the predicted inevitable response to “The Joy of Love.”

At the same time, many faithful Catholics are determined to see only the predominant orthodox statements. They make it harshly known that they consider any criticism to be disrespectful and malevalently belittling the supposed greater positive impact of those boldly stated orthodox teachings by Francis.

To them, Pope Francis' strong orthodox statements should cause any critics or doubters to accept that everything else in the statement or document must be positively interpreted, with the assumption that Francis could only have intended this or that orthodox point. All else is sensational, slanderous  speculation unbecoming a Catholic.

So, it seems to be a lose-lose for us at times, as it seemed for John the Baptist.

Still, we will continue to report what our faithful readers expect us to report – the truth, especially the truth that most others would prefer to ignore or perhaps just don’t see.

We will continue to be trustworthy, always respectful reporters on these controversial developments – for love of truth and for love of God.