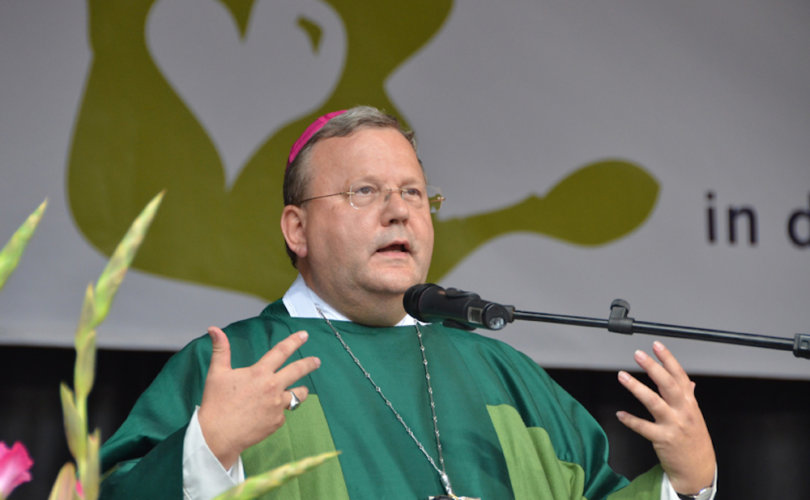 February 7, 2020 (LifeSiteNews) – “For us, Christ became a human being, not a man,” according to Bishop Franz-Josef Bode of Osnabrück, the vice president of the German Bishops’ Conference and head of the “synodal path” discussion forum on women.

Bode made these comments, which are now causing a stir internationally, in a controversial February 5 interview to the diocesan newspaper Kirchenbote.

“The collaboration between women and men,” he explains, “is one of the most important signs of the time.”

Bode makes these comments in the context of the debates of the synodal path's discussion forum “Women in Ministries and Offices of the Church” which he, together with the theologian Professor Dorothea Sattler, heads. These two leaders also headed the preparatory forum which issued a preparatory document even before the synodal path officially started its first assembly at the end of January 2020.

“A human being is either a man(male)or a woman (female). To deny that Jesus became a man (male) is heretical,” responded Father Gerald Murray, a frequent EWTN guest, on Twitter. “The German Synodal Way is a fraudulent usurpation of the Church's teaching authority as this comment shows. Shut it down.”

A human being is either a man(male)or a woman (female). To deny that Jesus became a man (male) is heretical. The German Synodal Way is a fraudulent usurpation of the Church's teaching authority as this comment shows. Shut it down. https://t.co/860pk30cqy

Bishop Joseph Strickland of Tyler, Texas, also weighed in, tweeting: “Bishop Bode…I respectfully call you as one bishop to another to return to the truth of the Deposit of Faith for your salvation and for the good of the Church.  Your statement that Christ became a human being but not a man is ridiculous & heretical. I cannot stand by in silence!”

Bishop Bode…I respectfully call you as one bishop to another to return to the truth of the Deposit of Faith for your salvation and for the good of the Church. Your statement that Christ became a human being but not a man is ridiculous & heretical. I cannot stand by in silence! https://t.co/qWPuiuXiWC

Bode's collaborator, Professor Sattler, already said something similar about Jesus Christ in September 2019 when she stated: “God could have also become a human being as a woman.” Theologically, this would have been possible. But 2,000 years ago, she added, it was wise from God in light of the “cultural conditions” then to become a human being as a man. She further expounded that in theology it was always about “God's Incarnation, not about his becoming a man.” The question of “gender,” Sattler explained, “has no relevance with regard to the theology of redemption.”

All these arguments seem to be an attempt at undermining the Church's definitive teaching that women are excluded from the Sacrament of Holy Orders.

In his new February 5 interview, Bode also says that the synodal path's forum on women wishes to discuss what is today already possible with regard to the equality of women in the Church. At the same time, one does not wish to lose out of sight the fundamental questions, that is to say, the question of “ordained” offices for women, according to Bode.

In April 2019, this German bishop announced that the topic of the female “diaconate” will be part of the synodal discussions in Germany. “We will not be able to avoid the question of women,” he then added.

It it interesting to see that, even though the synodal path as organized by the German Bishops' Conference and the Central Committee of German Catholics (ZdK) insists that it is meant to be participatory, one of the leading figures of this process had already promoted and announced one of its topics nearly a year before the beginning of that very process.

Bode is also a member of the small committee which organizes the synodal path. Next to him, Cardinal Reinhard Marx, Professor Thomas Sternberg (the head of the ZdK) and his representative are in that group. Many commentators in Germany criticize this way of steering the current synodal path that is to take place for the next two years.

As a matter of fact, an internet survey among some 5,000 German Catholics in preparation for the synodal discussions has shown that the question of so-called female ordination was “very little” mentioned by the participants.

Bishop Bode now goes as far as to suggest that, had women been more included, the “cover-up” of clerical sex abuse “would have taken another course.” He refers here to “decisions made by cliques of men,” indicating that the cover-up took place mainly because the responsible persons were male. This same idea is also found in the preparatory document of the discussion forum on women as headed by Bode and Sattler. The document asks: “Would the situation world-wide [concerning the clerical sex abuse] be different, had women more leadership responsibility in the Roman Catholic Church?” In order not to lose women as members of the Church, the text states that “also the question of the sacramental ordination of women has to be asked.”

Furthermore, the document asks with regard to the possibility of female sacramental “ordination”: “Is there at all a possibility to gain, with human power of knowledge, certainty about the Will of God in this matter?”, thus questioning the binding nature of the doctrinal teachings of the Church in this field.

The authors explicitly question the binding character of the papal document Ordinatio Sacerdotalis, in which Pope St. John Paul II, in a definitive manner, ruled out in 1994 the priestly “ordination” of women. This preparatory document, as prepared under the leadership of Bishop Bode, even questions the very nature of dogmas, claiming that human insights and positions are “always fallible”: “Each theological insight of men thereby always is marked by fallibility,” they write.

In his February 5 interview, Bishop Bode also repeated his desire for married priests who would continue to have their normal profession and work as priests on the weekends and as a side-job. The usual form of priesthood could co-exist with the new one, he claimed: “I am of the opinion that there can be both forms.”

Not only is Bishop Bode in favor of female “deacons” and married priests, he is also known for his support of the blessing of homosexual couples, a topic which is also part of the agenda of the synodal path. In January 2018, Bode proposed that the Catholic Church discuss the possibility of such a liturgical blessing, and in 2019, he wrote a foreword to a book with the same topic. Already in 2018, Cardinal Reinhard Marx had announced that the German Bishops' Conference had established a commission in order to reflect upon such a possible blessing.

Also in 2019, Bishop Bode said about the question as to whether he could picture a woman leading a Eucharistic celebration: “My imagination would allow it.”

In light of these reform ideas of Bishop Bode, it might be worth quoting here a prominent Protestant journalist and manager from Germany, Michael J. Inacker. In response to the German synodal path, Inacker commented on twitter: “Strange why Catholics imitate many of the mistakes of us Protestants with passion. What was once diversity in the #evangelical church is now reduced to simplicity. Nothing with a Christian profile. Cardinal #Woelki is right when he warns against Protestantization of Catholicism.”