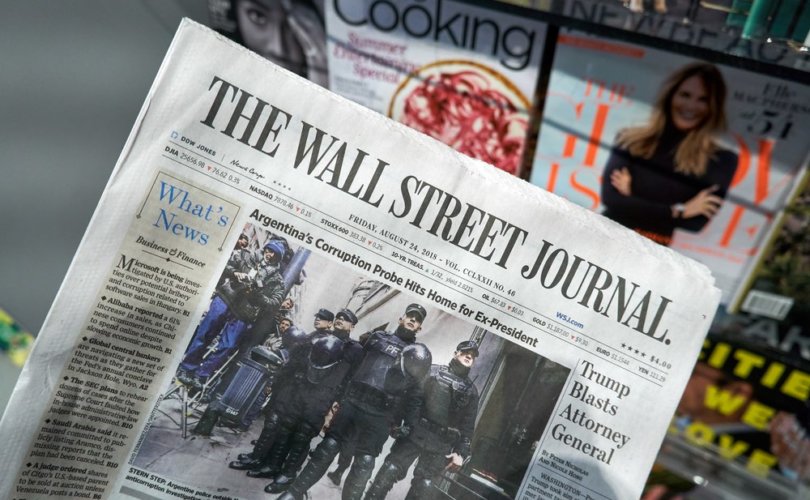 (LifeSiteNews) — The prestigious Wall Street Journal has chosen a side in the abortion wars. On April 26, WSJ published an editorial titled “Abortion and the Supreme Court: This is the moment for the Justices to turn the issue over to the voters.” The editors urged the Justices to use the Mississippi case Dobbs v. Jackson Women’s Health to overturn Roe v. Wade, which (with the accompanying Doe v. Bolton ruling) legalized abortion in all 50 states up until fetal viability. In 1992, the Supreme Court passed up an opportunity to overturn Roe, instead upholding its primary holdings in Planned Parenthood v. Casey.

The Court’s ruling is expected to come sometime in June, and many pro-life leaders are hopeful for the first time in decades. Dr. Robert P. George of Princeton University, for example, penned a column for First Things last October titled “Roe Will Go.” The questions posed by the justices to the lawyer for the abortion industry seemed to indicate that a majority are at least considering an overthrow of Roe rather than a limited pro-life victory simply permitting pro-life legislatures to ban abortion earlier in pregnancy (such as 15 weeks, as the Mississippi law seeks to do.)

In a major move, the editors of The Wall Street Journal have joined voices like George in publicly making the case for the end of Roe, writing in part:

Far better for the Court to leave the thicket of abortion regulation and return the issue to the states. A political uproar would ensue, but then voters would decide on abortion policy through elections—starting in November … In Dobbs, the Court can say that such a profound moral question should be decided by the people, not by nine unelected judges.

Worryingly, the editors also wondered if justices — most notably, erratic swing vote Chief Justice John Roberts — might be susceptible to influence by a “ferocious lobbying campaign” by pro-abortion groups, and whether he might be attempting to sway other justices to join him in declining to overturn Roe. If this were to happen, they wrote, Roberts “could write the plurality opinion that controls in a 6-3 decision. If he can’t, then Justice [Clarence] Thomas would assign the opinion and the vote could be 5-4. Our guess is that Justice [Samuel] Alito would then get the assignment.”

The editors then stated, “We hope [Roberts] doesn’t succeed — for the good of the Court and the country. The Chief’s middle ground might be explainable with some legal dexterity, but it would prolong the Court’s abortion agony … After a series of elections, abortion law will sort itself out democratically. That had started to happen before the Supreme Court intervened in Roe, embittering the abortion debate and damaging the Court. In Dobbs, the Court can say that such a profound moral question should be decided by the people, not by nine unelected judges.”

At National Review, however, Ed Whelan noted that he believes the suspicions of the WSJ editors to be unfounded:

I remain hopeful that the WSJ’s speculation is unsound. It’s one thing for the Chief to have explored the possibility of a “middle way” at oral argument. It would be quite another thing for him to pretend to have found a path that doesn’t exist. In my judgment, the WSJ is far too generous in suggesting that such a path “might be explainable with some legal dexterity” — unless, that is, dexterity is a gentle euphemism for rank sophistry./i>

As my own WSJ op-ed pointed out on the day of oral argument in Dobbs, the Chief’s actual record — including the principles that he has spelled out on when bad precedent should be overruled and his broader jurisprudential commitment to deference to the political branches — dictates that he should vote to overturn Roe.

Despite the urge to be cynical (pro-lifers have been betrayed many, many times before), I suspect Whelan is correct. Roberts does have a pro-life background — his wife once served on the board of a pro-life organization. Many of his previous rulings give reason for hope. And in this case, the “middle way” is returning the task of legislating abortion to the states, where voters can choose who they wish to govern and pass laws, and where they wish to live.