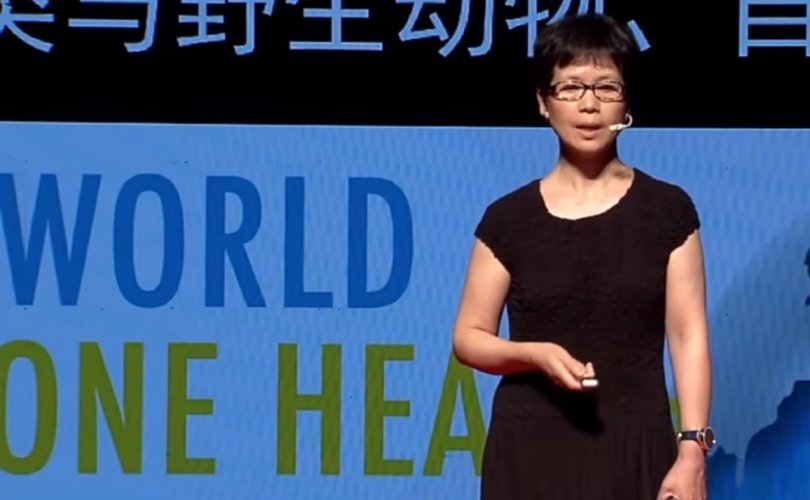 Editor’s note: The following report provides an account of how the coronavirus was likely created in a biolab by a Chinese scientist who then tried to cover her tracks after it escaped.

May 15, 2020 (LifeSiteNews) – Dr. Shi Zhengli, known as China’s batwoman, was worried.  Her creation, a highly infectious coronavirus, had leaked from her lab in October.  Early efforts to stop the widening circle of infections had failed.  It had spread like wildfire through the densely populated city of Wuhan.

The Communist authorities were also worried that the source of the epidemic would be traced back to the Wuhan lab.  To muddy the waters, on January 3rd,  China’s National Health Commission ordered all biolabs in China to destroy not only the samples of the SARS-CoV-2 that they had isolated from those infected, but also the genetic sequencing of the virus’ RNA strand.  Dr. Shi must have been only too happy to cover her own tracks—evidence suggests she had already started doing so–by destroying the evidence of the deadly virus’ actual origins in her lab.

It was the equivalent of trying to wipe the fingerprints from a gun that had just been used to commit murder.

The “gun” itself couldn’t be destroyed, however.  In fact, the murder weapon used was busy replicating itself by the billions within each and every person who came down with the China Virus.

Dr. Shi and her superiors, undoubtedly including Major General Chen Wei, the head of the PLA’s bioweapons program, knew that the coronavirus she had assembled using recombinant technology was so different from other known coronaviruses that it would raise suspicions.  None of the other known beta-coronaviruses, the family from which her “backbone” coronavirus came from, had anything resembling the genetic sequence she had inserted to make it more infectious to humans.

To reinforce the “Wet Market” cover story, namely, that this new pathogen had come from nature and not from her lab, something had to be done. And it had to be done quickly, since by then the China Coronavirus had spread to the rest of the world.  Anger against China for its lack of transparency about the origins and characteristics of the virus was growing.

Dr. Shi decided to “discover” a new bat coronavirus that was very similar to the one she had created.  That “discovery” would prove that coronaviruses similar to SARS-CoV-2 were found in nature, and so deflect the growing suspicion that she had engineered it in her lab.

The similarity between the two coronaviruses—including their common ability to infect humans–would greatly reinforce her story that the SARS-CoV-2 had jumped from a bat to a human, perhaps through some intermediate species at the Wuhan wet market.

So, all Dr. Shi had to do was sit down before her computer keyboard, open a word file, and begin to fabricate the SARS-CoV-2 analogue that she would claim to have found in nature seven years before. All she had to do was type in the genetic sequence of her own creation, SARS-CoV-2, changing a few nucleotides now and again to mimic the “random mutations” that regularly occur in nature.

She could easily have completed the “data entry” part of her task in a day, since all she was doing was entering in a string of letters alternating between the four nucleotides, A, U, G, and C.  And coronaviruses contain less than 30,000 different nucleotides.

Dr. Shi registered her new virus on January 27th, 2020, with the National Center for Biotechnology Information (NCBI) of the U.S. National Institutes of Health, the customary repository for such information.  She called it RaTG-13, Ra for Rhinolophus affinis, the Latin name of the Intermediate Horseshoe Bat, and 13 for 2013, the year she supposedly “discovered” it.

A lot of people have been taken in by Dr. Shi’s clever “discovery,” which is looking more and more like a forgery. No one else has independently verified its existence.  No other lab has a sample of it, and no one else has ever sequenced it.  And of course, they likely never will, because more and more evidence suggests that it exists only in a string of letters on her computer.

It was a brilliant scheme, and it almost succeeded.  The Chinese virology community—following new, strict Party guidelines—has published a flurry of studies suggesting that the existence of RaTG-13 proves that SARS-CoV-2 came from nature.  They claim that other “first cousins” of the China Coronavirus will soon be found to exist in nature if we just keep looking.  They do genomic analyses showing that RaTG-13 and SARS-CoV-2 are 96% identical throughout the whole sequence of the viral genome.  They calculate that the two share a common ancestor a few decades back.

Actually, the only thing the two virus genomes have in common is Dr. Shi herself, who engineered the one and appears to have fabricated the other.

As clever as Batwoman is, however, she did not commit the perfect deception.  She left behind a few key clues that reveal, as clearly as fingerprints on a murder weapon, what she was up to.

An Impossible Ratio:  As viruses evolve, they mutate.  That is to say, one of the four nucleotides is randomly replaced by another.  Most of these random mutations do not produce changes in the amino acids that make up the protein.  Such mutations are called “synonymous”, since the three-nucleotide “codon” still codes for the same amino acid despite the change.  Like a synonym in a thesaurus, it “looks” different but “means”—in terms of the amino acid and resulting protein—the same thing.

Here’s where Dr. Shi got into trouble.  When typing in the genomic sequence of her “discovery” she made way too many non-synonymous changes at the beginning.  Then, one-third of the way through the sequence, she apparently realized her error.  After that, she made way too few non-synonymous changes.  So while the entire genome has the expected 5:1 ratio, there are stretches where the ratio is closer to 2:1, and other long stretches where it is as high as 44:1.

Nature’s mutations are random.  Dr. Shi’s “mutations” are not. Dr. Lawrence Sellin has calculated that the odds that her “mutations” occurred naturally in just one area—the critical spike protein–at almost ten million to one.

If RaTG-13 is merely a strategic deception, as I believe it is, then what real coronavirus did Dr. Shi enhance in “Gain-of-Function” research to create the highly infectious SARS-CoV-2?  Evidence suggests that a coronavirus from a People’s Liberation Army biolab may have played this role.

If Dr. Shi’s research was in any way connected with the PLA’s bioweapons research program, this would go a long way towards explaining China’s bizarre behavior – the secrecy, the serial lying, the brutal quarantine, the persecution of whistleblowers, the seeding of the virus around the world, and the furious rejection by Beijing of the idea of an international commission to investigate the origin and spread of the disease.  It all seems wildly overwrought, even by the standards of a conspiratorial Communist Party whose leaders suffer from a pathological paranoia.

Be that as it may, there is one thing about Dr. Shi’s research that we do know with absolute, ironclad certainty: The U.S. was helping to fund it.  From 2013 onwards, the National Institute of Allergies and Infectious Diseases, run by the now-famous Dr. Anthony Fauci, gave $7.4 million for research involving gain-of-function work and collecting and studying bat coronaviruses, $600,000 of which went to the Wuhan Institute of Virology.  Much of the rest went to other labs in China.

If Dr. Fauci was as familiar with the Chinese Communist Party as he is with viruses, he would not have sent the Wuhan Institute of Virology one thin dime. He would have known that the PRC has a long-running program to develop bioweapons. He would have concluded that China’s only BSL-4 high containment lab was the obvious place to carry out at least some of this research.  And he definitely did know that the “Gain-of-Function” research he was funding had the potential to create “Pathogens of Pandemic Potential” that might not be used for peaceful ends.

Apparently none of these considerations ever crossed his mind.

Now that Western intelligence services have concluded that SARS-CoV-2 probably is a manmade chimera that leaked from a lab — a lab that he was funding — you might think that Dr. Fauci would be inclined to reevaluate the role he played in this global debacle.

It is a sad end to a career that was at least long, if not particularly illustrious.