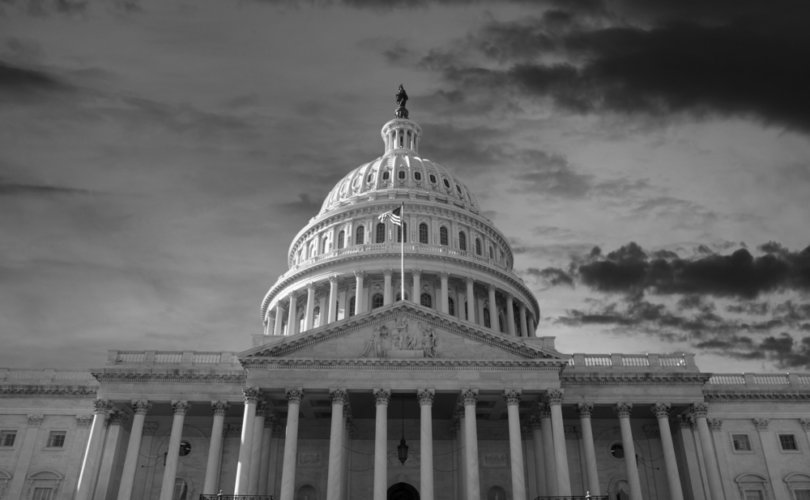 WASHINGTON, March 28, 2018  (LifeSiteNews) – Storm clouds are gathering in the nation’s capitol that may threaten to rain on the nation’s young tech giants’ practices of suppressing conservative messaging while freely promoting liberal ideology.

To those who have seen their reach and influence on social media platforms suddenly minimized, the storm’s distant rumblings are a welcome sound.

A few tech giants control the vast majority of the flow of online commerce. Among these are Facebook, Google, Twitter, and YouTube (owned by Google), each dominating a different facet of the internet, and each in their own way presenting a very real existential threat to conservatives.

Together they hold a near-monopoly on the flow of information and news. As such, the are able with their complex algorithms to manipulate public discourse and limit free, unimpeded inquiry.

These tech giants, fueled by a politically correct worldview, are ultimately able to undermine what it means to live in a democracy.

Because of this, questions are being raised by lawmakers on Capitol Hill as well as by White House execs. There are indications that both suspect the time is ripe for these tech giants to be regulated as public utilities in order to provide greater safeguards against heavy-handed favoring of progressive values and messaging overbalanced or conservative ones.

Vice President Mike Pence is concerned about Facebook and Google, according to a report in Axios.

“Though Pence isn't yet pushing internally for any specific regulations, he argues these companies are dangerously powerful,” said the report, adding that a “source said the V.P. worries about their influence on media coverage, as well as their control of the advertising industry and users’ personal info.”

Former White House Chief Strategist Steve Bannon has called for social media platforms like Facebook and Google to “be regulated as utilities.”

Some seem to favor a higher degree of regulation, while others toy with the idea of breaking up the online giants. Both notions send up red flags in conservative and libertarian circles, where government intervention and bureaucratic heavy-handedness have traditionally been anathema.

In the end, though, it looks like the battle will be between the Leviathan federal government and the nascent social media Behemoths.

The clash is unavoidable, because if the tech giants are allowed to continue on the path they are now on, the voices of conservatives will be muted to an inaudible whisper, and their visual presence will simply vanish.  It will be as if conservatism, traditional religion, and even patriotism as we know them will have ceased to exist on the internet’s public forum.

When Facebook adjusted its algorithms earlier this year in order to ensure the promotion and dissemination of what it deems “quality news,” websites purveying ‘conservative’  news — including LifeSiteNews — noticed a precipitous drop in traffic and reach.

A report filed by The Outline earlier this month in the aftermath of Facebook’s algorithm change, notes:

Facebook’s January 12 announcement that it would begin to de-prioritize news publishers and their posts in users’ News Feeds has had a surprisingly profound and partisan impact. According to The Outline’s analysis of Facebook engagement data obtained from research tool BuzzSumo, conservative and right-wing publishers (such as Breitbart, Fox News, and Gateway Pundit) were hit the hardest in the weeks following the announcement, with Facebook engagement totals for February dropping as much as 55 percent for some, while the engagement numbers of most predominantly liberal publishers remained unaffected.

The report pointed out that Breitbart's engagement dropped by 28% and PragerU dropped by a whopping 32%, despite publishing 18% more content during the time period.

Not only that but “In the month following the algorithm change, engagement on Donald Trump’s Facebook posts dropped sharply,” according to a Breitbart report.  “Total engagement dropped by approximately 45 percent, according to data from leading social media analytics firm NewsWhip.”

Consensus is Building:  Power Is in the Hands of Too Few

Tech giants like Facebook, Google, and Youtube now enjoy political power on par with Big Oil and Big Pharma, and power to influence American society like perhaps no corporate entities, ever. Yet Oil and pharmaceutical companies are subject to strict regulation.

“Big Tech’s greatest sins are locking in a winner-take-all economy, decimating the middle class and exercising monopoly-like powers that cause the free market to fail,” reports Jon Talton, who thinks maybe it’s time to break up ‘Big Tech.’

“Competition is stymied,” and “Power is in the hands of too few,” asserts Talton in his Seattle Times Opinion piece, where he suggests that the tech giants need to face a “Theodore Roosevelt-style trust busting.”

A consensus is building.

Steve Bannon, said last year that Facebook and Google “have become essential elements of 21st century life,” that “should be regulated as utilities,” according to The Intercept.

The report continues, “Bannon’s basic argument, as he has outlined it to people who’ve spoken with him, is that Facebook and Google have become effectively a necessity in contemporary life. Indeed, there may be something about an online social network or a search engine that lends itself to becoming a natural monopoly, much like a cable company, a water and sewer system, or a railroad.”

Breitbart’s John Nolte, in a piece titled “Arguments against breaking up Facebook do not hold water,” notes that “now that Facebook has trapped all of us onto its platform, thus ensuring there is no alternative, Facebook is arbitrarily censoring conservative ideas and speech.”

Basically, if you were to move to an alternative platform, you would be removing yourself from the public square that is Facebook, and as a result your ideas and arguments would be at a major disadvantage.

Unfortunately, like the telephone (Ma Bell) and U.S. Post Office monopolies of 35-years-ago, there is no effective way to replace the power and reach of Facebook with something else.

Think of it this way: if 35 years ago, Ma Bell did what Facebook does now  — took telephones away from those who express certain opinions — how could  you possibly compete on the level playing field of ideas? How could you join the debate, effectively organize, etc?

Nothing is anywhere near as established, powerful, or central as Facebook.

Leaving Facebook, or being purged from Facebook, is like leaving the public square. You are at an immediate disadvantage. You can no longer address the crowd. You have been removed from the primary gathering place where important debates and decisions take place.

Carlson said, “Google is the most powerful company in the history of the world. It’s the portal through which the bulk of our information flows. That means that if Google isn’t on the level, neither is our understanding of the world. To an unprecedented extent, Google controls reality. Google has already shown a disturbing willingness to distort reality for ideological ends.”

Carlson continued, “Until they were sued for it in 2008, Google refused to allow anti-abortion advertisements on its platforms even though they freely allowed pro-abortion ones. On the flip side, Google often blacklists certain sites from hosting ads which denies them revenue. Recently, Google-owned YouTube has introduced procedures to cut off revenue to, quote, ‘offensive content.’ What’s offensive? Who decides?”

Carlson said it’s now obvious that Google can’t be trusted to monitor and make judgments about what is offensive and what is not offensive for its users. “Why should a company that shuts down free speech for political reasons have the power to dictate what the world knows and thinks? Well, of course it shouldn’t have that power.”

According to the Federal Trade Commission (FTC), “Free and open markets are the foundation of a vibrant economy. Aggressive competition among sellers in an open marketplace gives consumers — both individuals and businesses — the benefits of lower prices, higher quality products and services, more choices, and greater innovation.”

“The FTC's competition mission is to enforce the rules of the competitive marketplace – the antitrust laws.”

“Congress passed the first antitrust law, the Sherman Act, in 1890 as a ‘comprehensive charter of economic liberty aimed at preserving free and unfettered competition as the rule of trade.’ In 1914, Congress passed two additional antitrust laws: the Federal Trade Commission Act, which created the FTC, and the Clayton Act. With some revisions, these are the three core federal antitrust laws still in effect today.”

Yet those “core laws” don’t necessarily extend to today’s important challenges facing the American marketplace of ideas and the free, unfettered flow of information.

Google has already been fined $2.7 billion by the European Commission for violating its antitrust law, based on Google’s limiting of consumer choices for Europe’s citizens.

Tucker Carlson concluded his comments last year, saying that “Congress here and the Trump administration should go further than that. Since it has the power to censor the internet, Google should be regulated like the public utility it is to make sure it doesn’t further distort the free flow of information.  To the rest of us, that needs to happen immediately. Too bad it’s come to this. A lot of us trusted Google not to be evil. Silly us.”

Lawmakers and those serving in executive branch decision-making roles need and want to hear the opinions of concerned citizens.  Those who cherish freedom and democracy should take the time to encourage them against censorship by internet giants. Concerned citizens should push for stricter regulation or for breaking up social media monopolies because of the massive power they wield to shut down what they don't agree with.

Facebook CEO: We can play the role that churches once filled

Former Facebook exec: ‘You don’t realize it but you are being programmed’