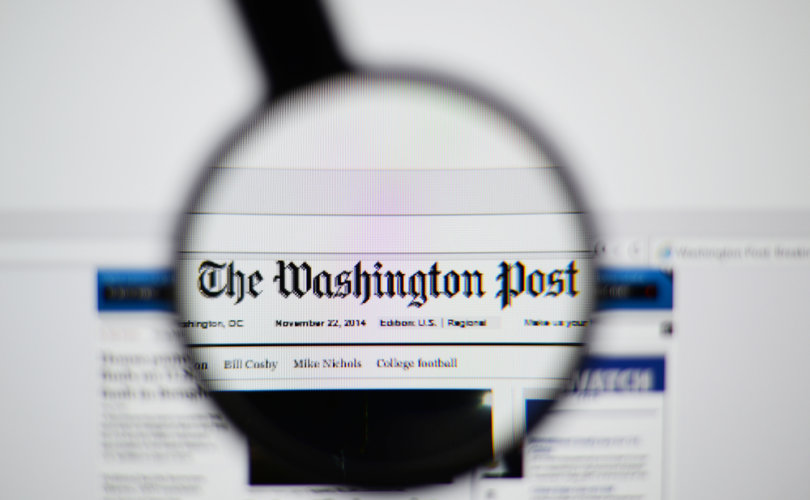 (LifeSiteNews) —  A columnist for The Washington Post called the trucking convoy movement “extremist” and “fringe,” and compared it to a “temper tantrum” in an article that reads like a fit of Trump derangement syndrome from a Marxist undergraduate student who has overdosed on Rachel Maddow.

In the article entitled “Canada must confront the toxic ‘Freedom Convoy’ head-on,” the author goes on an unhinged rant about everything from far-right extremism to “generalized rage” to “threats to liberty,” and, of course, wealth inequality, gender discrimination and “settler colonialism.”

I cannot for the life of me see how a rational mind can connect so many unconnected dots, but then again, perhaps we are not dealing with a rational mind.

The “essay,” if it can even be called that, is barely 600 words and makes logical leaps that would cause a ninth grader to fail an essay writing assignment in a saner time.

Apparently, the author, Mr. David Moscrop, is aware of some underlying insidious nature of the movement that he believed would create some sort of January 6 rioting. I am not sure if by that he meant that the police would allow the protesters to walk into parliament.

At any rate, the piece shows just how warped leftist media has become in recent years, and it seems to be reaching a breaking point.

It is one thing for some post-modern blowhard to prattle on about incoherent intersectional gobbledygook – all politicos and talking heads drone on at times without knowing what they are talking about.

But it is quite another thing to completely ignore objective reality and fail to feign even a modicum of journalism integrity. I would say that what the WaPo published was Orwellian, but I believe that would be a mistake; Orwell wrote of sophisticated and intelligent totalitarians, and it would be disrespectful to sully his legacy by conflating things that are not comparable.

Facts and reality need not apply

Moscrop opines that “hundreds of trucks and personal vehicles” were headed to Ottawa.

I was at a truck stop in Ontario where at least 40 trucks left the location to join one of the many convoys from around the country that had already been traveling from the southern tip of the province with hundreds of other trucks. There were easily twice as many personal vehicles that joined the convoy.

In a way, it is fascinating to contemplate just how deep a disconnect one has to have with reality to make such a ludicrous statement such as the one that Moscrop made about the number of trucks.

I would imagine that he has access to the internet, and thus could look at videos and images on social media and YouTube. If I may be so bold, I would also put forth the notion that he might even have functional eyeballs that can perceive images and moving pictures.

If this is true, then he could have simply looked at the live feeds from dozens of available streams showing thousands upon thousands of vehicles.

He also wrote: “The movement shares an affinity with Trumpist toxic authoritarian politics.”

Regardless of what one thinks about the Donald, is it Trump or men like Trudeau and Biden who have been dictating mandates and oppressive policies while belittling subsets of their populations?

If a man stands at a podium, stares into the teleprompter, and dictates authoritative mandates that inflict segregation on a group of citizens, wouldn’t that man be called an authoritarian or a dictator? Wouldn’t these things apply to the leftist leaders who have done as much for two years now?

WaPo is hardly the only unhinged leftist outlet

The Washington Post is but one of many leftist outlets that have smeared the truckers with fantastical ravings over the past few days.

MSNBC has also joined the unreality brigade, showing that the TV presenters who masquerade as journalists would be better served if they spent their days in a rubber room.

On Monday Morning Joe, the two hosts bantered back and forth about the “dozens” of trucks in Ottawa that had brought the city to a “standstill.” Now, I can be forgiving of ignorance from my American confreres about the geographical reality of Canadian cities; I understand that the American universe is much larger than Canada. However, does it really stand to reason that “dozens” of trucks could bring the capital of a G7 nation to a “standstill?”

I live in a village of under 1,000 people in rural Ontario and we can still function just fine with dozens of farming vehicles parked along Main Street at any given time.

Apparently, the witless fools at MSNBC picture Ottawa – a city of a million people – as something like a medieval village with perhaps 50-100 inhabitants without viable roadways.

Listen to MSNBC attack the Truckers as a cult

This is Capital TV from Hunger Games but in real life pic.twitter.com/ypZzIIrWLJ

According to the TV hosts who believe Ottawa to be a pre-colonial nomadic campsite, some protesters were stealing food from the homeless because they would not be served for their refusal to wear masks.

In reality, the protests are teeming with free food, and virtually anyone in Ontario can go into most locations without a mask and be served. I do not own a medical mask, with no intent on buying one, and I have not been refused service at any food establishment.

Here is a video of hundreds of maskless people shopping and buying food in a major commercial center in Ottawa.

Mask mandates are useless in Canada’s capital, Ottawa. Hotels and malls are allowing people to be maskless. In my hotel alone, there are hundreds of maskless people like myself. And the staff are respectful and don’t even bother asking anyone to wear one.

The left’s favorite boogeyman, Russia, has shown up again as the real cause behind the freedom movement.

With the growing tensions between Russia and Ukraine, a CBC host suggested that maybe Russia was behind the growing protest, and even of the progenitor of the thing.

The CBC suggests “Russian actors” are behind the #TruckersForFreedom convoy. Seriously. #cdnpoli pic.twitter.com/a6sQyWtKkx

That’s right, the nation of Russia is apparently behind a protest movement in Canada, organized by blue collar workers, because … white supremacy? Oh no, wait, how about Nazism?

These leftist commentators are the same people who call you a conspiracy theorist if you say ivermectin is an effective COVID treatment – which it is – or if you suggest that COVID case and death reporting isn’t accurate, which it isn’t.

As the convoy protest rolls on, there are a growing number of instances of insane leftist media nonsense, too much to go over here.

But suffice it to say, Canada – and the world at large – is divided between those who live in reality, and those who embrace unreality. It is clear what side the left is on.