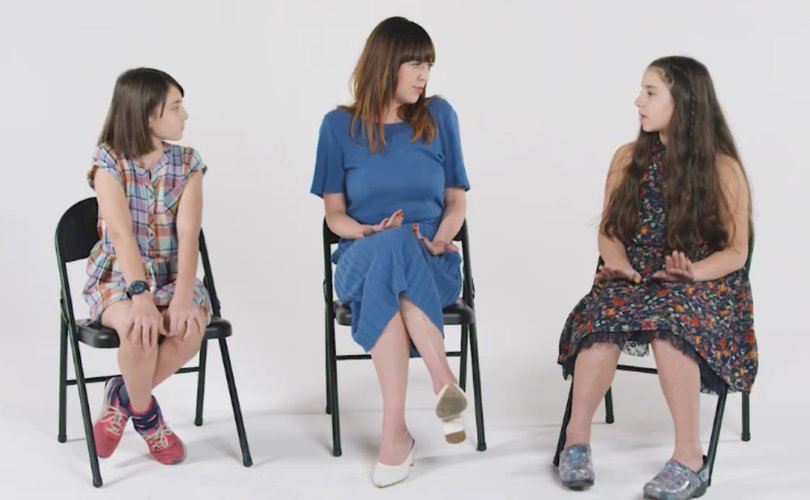 January 2, 2019 (LifeSiteNews) – By any definition, the video featuring a young woman chatting with children has now gone viral, racking up 822,00 hits by January 2. It is part of a series called “Kids Meet,” and prior episodes have included gimmicky setups like “Kids Meet A Bounty Hunter” as well as your typical progressive indoctrination sessions, such as “Kids Meet A Gender-Non-Conforming Person.” Each of those videos earned around 40,000 hits.

Their latest release, however, is different. Featuring the founder of “Shout Your Abortion” Amelia Bonow, it is titled “Kids Meet Someone Who’s Had an Abortion” and has Bonow explaining to children why aborting children is not only okay, but could actually be “all part of God’s plan.” Bonow, who has an extraordinarily hard-looking face, asks one young girl what she’s heard about abortion. “I don’t exactly know what happens, but you go and get rid of the baby,” the girl replied uncomfortably.

Bonow sets the record straight for them. “You go to the doctor, and they put this little straw inside of your cervix, and then inside of your uterus, and then they just suck the pregnancy out,” she replies. “And it was like a cr*ppy dentist appointment or something. It was just like, ‘This is a body thing that’s kind of uncomfortable,’ but then it was over, and I felt really just grateful that I wasn’t pregnant anymore.”

Bonow is the sort of activist who has never met an abortion she didn’t wholeheartedly support. Some of the older kids asked her if she had been reckless, and why she and her partner hadn’t used a condom. Whatever, was Bonow’s response. We did what we wanted to do, and then got rid of the baby afterwards, easy peasy. What’s the big deal? Even when the kids—and we’re talking about kids here—seemed uncomfortable with it, she assured them that there might be situations you just go with, in the moment, that might lead to needing an abortion later.

One African American boy couldn’t quite get over her cavalier attitude. Although he thought abortion was moral in some circumstances, he felt that “if, like, you are being reckless” then perhaps abortion was wrong.

“Do we want people to just have all those babies?” Bonow asks, not mentioning that it is the babies that would be “sucked” out of the uterus.

“So what do we do with them?” she questions.

“Put them up for adoption,” he stated. Bonow disagreed, stating that this scenario would force her to “create life” and that it would mean she would have a child somewhere in the world. She also indicated that she doesn’t believe it is a life until the baby is actually born, although she referred to abortion throughout her brainwashing session as a solution to her unwanted baby. “I think it’s all part of God’s plan,” she asserted.

Bonow, of course, wasn’t forced to create life. She and her partner did that voluntarily. In fact, she reveals that they didn’t take any measures to prevent life from being created in the first place. It turns out that when you use your reproductive organs, reproduction can at times occur. That, unfortunately, is not the sort of thing that makes it into progressive sex education curriculums.

Bonow then turned her attention to the two young girls, one of whom identified as Catholic. The Catholic Church, the little girl noted, was opposed to abortion because it was “like, killing the baby.” Bonow, an adult, asked them pointedly what they thought. Shifting in obvious and understandable nervousness, one girl said uncertainly, “I think it’s up to you.” The other girl nodded: “Same.”

“I feel supported by that,” Bonow said approvingly, smiling creepily.

The entire video is a trainwreck of misinformation and abortion propaganda. Bonow makes fun of the fact that many people accurately highlight the scientific reality that life begins at conception, because she finds that fact very inconvenient to her ideology. She attempts to get a few kids chuckling about this, as well, hopeful that they have not, at this stage in their life, been exposed to embryology or a sonogram or ultrasound of a pre-born baby. Even then, one of the kids accidentally refers to the life in the womb as a “baby” at one point while explaining why he agrees with her. The truth has a way of getting out.

Bonow does helpfully explain to a couple of kids that she doesn’t call pro-lifers “pro-life,” but prefers to refer to them as “anti-choice.” After all, Bonow says unsubtly, “pro-life” is just a propaganda term because pro-lifers don’t want to take care of the poor, or help people who have given birth to their babies. Bonow has either never heard of crisis pregnancy centers, or is lying, and very likely both. “You’re not pro-life, I’m pro-life,” she announced defensively, after explaining why she had to abort her baby just because she didn’t want one.

At the end of the video, one tattooed teenage girl—who is apparently very supportive of abortion—asked Bonow if she had any tattoos. Bonow responded by peeling back her lower lip to reveal the word “abortion” tattooed inside. Both of them found this to be hilarious.

This video is a perfect example of our society’s schizophrenic approach to science—and almost everything else. Science is important, except when it comes to life in the womb, where it becomes inconvenient for those wishing to shout their abortions at little kids without judgment for killing littler kids. Watching the video, it is hard to see Bonow as anything but a bully when she is talking to the smallest girls, because obviously they are only allowed to voice one opinion or they’ll promptly find themselves arguing with an adult abortion activist who spends her life defending her irresponsibility and subsequent feticide in public.

Interestingly, pro-life activists could tell Bonow what children really think when they encounter the idea of abortion. Most of them are instantly sad, and many of them ask a question that Bonow might have a hard time answering: “Who broke the baby?”