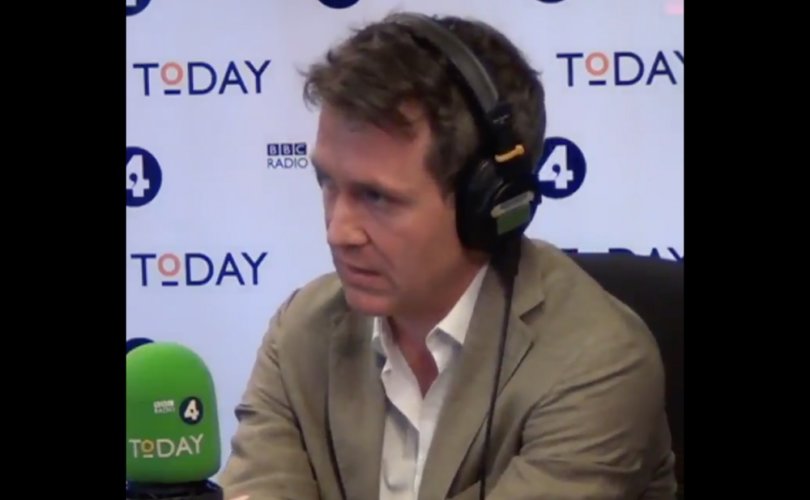 September 17, 2019 (LifeSiteNews) – Douglas Murray’s invigorating new book The Madness of Crowds: Gender, Race, and Identity, has just been released, and you can tell by the chapter titles alone—Gay, Women, Race, Trans—that he won’t be strolling through any minefields. He’ll be doing some salsa dancing, with today’s triggered progressives exploding in his wake.

I’ll have a longer synopsis of his book forthcoming (I received a review copy several weeks ago), but in the meantime, an excellent example of precisely the sort of thing Murray addresses in his book cropped up this week on BBC Radio, where Murray was discussing his new book. The issue of transgenderism, Murray noted, is in some ways “the most revealing, because it’s the one that demonstrates how bad we are at discussing, thinking, or even talking without weaponizing things against each other. We just had a really interesting one this past weekend. The pop singer, Sam Smith, came out as non-binary. He’d previously come out as gay, came out a bit later as gender-queer, and now says he’s non-binary, which means, among other things, that he wants plural pronouns used of him.”

At this point, with a half-apologetic grin, Murray shifted gears: “Now the BBC—not to make a criticism of my hosts—immediately on its website said, ‘they said in their statement’ and so on. Now, this isn’t the biggest thing in the world. But how about this: Why can’t we think about what this claim actually is? I don’t think there’s any such thing as non-binary. I don’t think there’s any such thing. And a lot of people know that, too. But because we’re so bad at discussing it, everybody, including the BBC, immediately starts to say Okay, we’ll massively distort and maul our language if somebody’s got a claim.”

You could almost see the host twitching while Murray delivered his broadside against the non-binary fad, and journalist Afua Hirsch promptly joined the conversation to accuse Murray of being a medieval reactionary who was using precisely the same arguments wielded by those who opposed feminism and anti-racism and the rest of the progressive movements. Murray, who is homosexual, looked slightly bemused, and it was at this point that Hirsch brandished the club, accusing Murray of having written a column on Sam Smith that “verged on bullying.”

The offending column appeared in the Telegraph beneath the delightful title “Vacuous Liberal Wokeness is Now Beyond Parody,” and included scathing paragraphs like this tidbit:

Beyond being an invitation to torture the language, even Smith seems confused about quite what this entails. For as he said in his latest brave statement: “I am at no stage just yet to eloquently speak at length about what it means to be non-binary, but I can’t wait for the day that I am.” Nor can the rest of us, I’m sure. Though in the meantime, perhaps Smith can let us know when he has worked out any difference between coming out as non-binary and shouting “Look at me!”

And why did Murray’s column “verge on bullying?” Because he had dismissed Smith’s big non-binary reveal as a nothing-burger but, even more offensively, he had refused to refer to Smith in the way that he desired. He wanted to be called “they,” and Murray had called him he. This, of course, is now the sort of thing we refer to as bullying, and Hirsch sanctimoniously reminded Murray that, “This is someone who is making an expression of his identity.”

Did you catch that? I wouldn’t blame you if you didn’t—Hirsch certainly didn’t. While condemning Murray for being a bully because he called Smith him, Hirsch also used the male pronoun, referring to an expression of “his” identity. Meaning that Hirsch inadvertently bullied Smith, because he wanted her to call him they, or something.

Listen for the 2nd misgender bomb �� straight after. Lols. pic.twitter.com/fxr145z4d7

As Murray noted dryly on Twitter: “Perhaps this woke stuff is harder than it looks?”