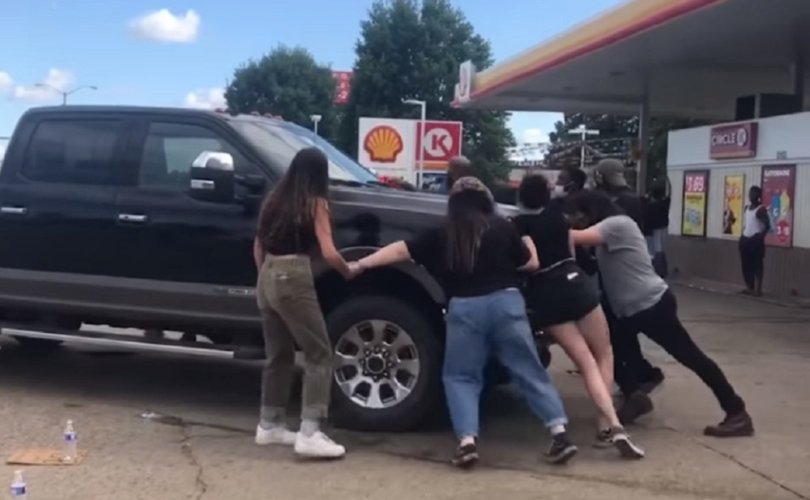 August 31, 2020 (LifeSiteNews) — If you paid professional actors to record a satire video, mocking the deluded perceptions of some of today’s “protesters,” it would be difficult to improve on this one. The absurdity is so stunning that it almost leaves you speechless.

The video was shot at the Shell gas station in Lafayette, Louisiana, where Trayford Pellerin was shot and killed by police on August 21. It was posted by the conservative media figure Graham Allen on his Facebook page. (Be forewarned that there is bad language.)

It’s clear that some of the protesters are deeply upset with Pellerin’s killing, convinced that this was yet another example of police brutality against a black man, and I don’t minimize their pain. I simply write to separate myth from reality.

In the video, a number of protesters, both black and white, stand side by side, blocking the entrance to the station. A pickup truck approaches very slowly, intending to drive in and get gas, at which point the protesters join hands to stop the vehicle.

Undeterred, the driver, who, it turns out, is a white male, continues to move forward very slowly, just inches at a time. The group then begins to separate, with some pounding his vehicle, as they chant, “No justice, no peace.” (Someone outside the video frame also throws a rock at the truck. Another bounces up and down on the back of the vehicle)

Some members of the group try to hold his vehicle back, but without success. Others give the driver the finger — how dare he drive into the gas station to fill his truck — also cursing him with the F-word. The audacity of this man!

Amazingly, as some of the “protesters” continue to shout at the driver (while the others resume their blocking vigil to stop other cars), he calmly gets out to pump gas.

As others shout out, “Say his name,” one of the group turns to the camera to explain what is happening. You really have to watch it to believe your eyes.

He says, quite passionately, “This is the type of foolishness that we’re talking about. This man took his vehicle and tried to pass it through a peaceful protest and tried to kill us.”

That’s right. The fact that a driver, who apparently lives in that area, decided to get gas at his local gas station, is the “type of foolishness” that these righteous protesters must deal with. Oh, the burden!

But this is only the beginning of the unintended self-satire.

The driver could not have been more careful, and should a driver with a pickup truck want to hurt (let alone kill) people standing in front of him, he need only slam the pedal to the floor.

Watch the footage for yourself. Then ask the obvious question: in what reality are these protesters living? He “tried to kill us”?

Another protester then joins in, just as passionate, calling the driver “a racist” — he must be, if he is getting gas at that particular gas station — stating that he tried to drive a car into them, while acting as if he did nothing wrong. (Here’s a quick reality check: the driver did nothing wrong.)

The first man speaking now claims that the driver is guilty of “inciting a riot” (I’m not making this up). This is echoed by a woman who claims that he came to the gas station “to cause destruction, deliberately.”  (As they’re yelling, the driver is talking calmly to one of the other protesters while his truck fills up.)

Again, I urge you to watch the video for yourself. Oh, the destruction! Oh, the incitement!

Yes, the unidentified driver, pumping gas while talking calmly with a protester after driving his truck as slowly as possible so as not to injure anyone, is a domestic terrorist. By now, he should be high up on the FBI’s most wanted list. Who knows what other acts of destruction and incitement he has engaged in until now? Arrest him!

You might ask, “But what’s the point of your sarcasm? People are hurting, and that’s what you should focus on.”

I agree that people are hurting, and I grieve with those who grieve. But I will not ignore it when people turn reality upside-down. I will not cheer on those who engage in self-righteous, potentially dangerous, fantasy. This is a microcosm of what is taking place in cities all over America.

These aggrieved people did not have the right to block the entrance to the gas station. Or to pound on the driver’s truck. Or throw a rock at it. Or jump on the back of it and bounce up and down. Or assault the driver verbally.

Nor did they have the right to create their own reality, where the “protesters” engage in harassment, intimidation, and possible property damage while labeling an innocent man a “domestic terrorist.”

When people stand for the truth, they will find me a ready ally. When they engage in self-deceived fantasy, they will not.