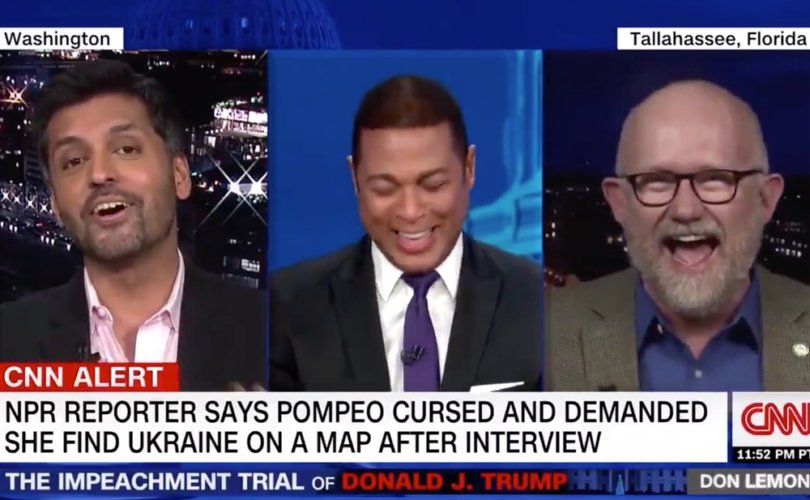 January 29, 2020 (LifeSiteNews) – A few weeks ago, I wrote in this space that all the progressives really have to do to win enough votes to retake the presidency is to prove that they don’t hate social conservatives—but that this was simply too much to ask. Exhibit A is a recent exchange on CNN, which I’m sure that you—and millions of others—have already seen by now. It features host Don Lemon, GOP strategist Rick Wilson, and New York Times contributor Wajahat Ali chortling uproariously as they mock Southern voters and Trump supporters.

Wilson kicked off the mockery by making fun of Trump’s intelligence which, considering the president’s habit of calling people dumb (his response to this clip was to call Lemon “the dumbest man on television”), is fair game, if you want to stoop to that level. “Donald Trump couldn’t find Ukraine on a map if you had the letter ‘U’ and a picture of an actual, physical crane,” Wilson stated. “[Pompeo] knows that this is an administration defined by ignorance of the world. So that’s partly him playing to their base and playing to their audience: the credulous boomer rube demo.”

More Proof that CNN is utter trash, and hates half the country.

Don Lemon: laughing out of controlpic.twitter.com/y3U7Zaw8Sh

As Don Lemon erupted into laughter, Wilson and Ali got specific as to who that “credulous boomer rube demo” is, exactly, trading jokes in thick faux Southern accents. “You elitists with your geography and your maps and your spelling,” chuckled Ali. “Your math and your readin’,” Wilson rejoined. Don Lemon finally ended the segment, pulling himself together with great difficulty, wiping tears from his eyes: “Give me a second, hold on. That was good, sorry. I needed that.”

In less than two minutes of television, the exchange perfectly highlighted the stark American divide: media commentators and a GOP establishment man displaying their total contempt for stupid, illiterate Southerners who are simply too dumb to know how to vote. As the backlash mounted, Lemon attempted to deliver a non-apology, and Rick Wilson responded by stating that “Once again, the MAGA tough guy ‘f*** your feelings’ crowd demonstrates that what really drives them is a grinding social anxiety fueled by a weaponized and monetized outrage machine.”

Actually, what Wilson demonstrated is that millions of voters are actually driven by the fact that they believe the media, the progressives, and even the GOP establishment (as represented by folks like Wilson) hold them in utter contempt, and that this was a revealing moment where the mask slipped. Many suspect that these are the sorts of hilarious impressions that the GOP country club crowd like to do with their Democrat friends in the Hamptons, away from the cameras. After all, Wilson wasn’t making fun of Trump. Trump doesn’t have a Southern accent. He was mocking people Hillary Clinton called the “deplorables.”

It is mind-boggling that someone like Wilson, who is apparently a strategist of sorts, does not see how damaging his chuckle-fest with Ali and Lemon actually was. The GOP turned the exchange into a powerful ad within three days, featuring the elites sneering at the fellow Americans they’re forced to tolerate in order to attain the political positions they clearly feel they deserve. As Harvard Law School professor Adrian Vermeule noted on Twitter: “It’s perfectly rational for ordinary Americans to reject any possibility that this class should rule them, even if the alternative is Donald Trump.”

Rod Dreher put it more bluntly: “[T]raditional Southern culture is shame-honor culture. Millions more people have now seen that clip than saw it on CNN. When Southern white people who voted Trump see it, they know they are being mocked as Southerners. There is not a single person who voted for Trump, or who is considering voting for him in 2020, who will watch Rick Wilson, Don Lemon, and Wajahat Ali making fun of them like that and think, ‘Well, I guess I better vote for the Democrat so these CNN people won’t poke fun at me.’ But there are a lot of them who will crawl over broken glass to hit that trio of…smirkers where it hurts the most: in the Oval Office.”

The fact is that the elites simply do not understand Middle America, and what they do know they don’t like. Rural America is about as foreign to them as Pakistan, and it constantly irritates them that these folks have a say in how the country is run. You’d think that the election of Donald Trump might have warned them that they should be listening a bit closer, but many simply refuse to admit that they might be at fault (Bill Maher, who constantly warns his audience to dislike Trump but not his supporters, is a notable exception.)

Watching the CNN exchange reminded me of a column by Anne Bauer in the Washington Post back in 2018, titled: “I was a Yankee liberal. It took moving to Arkansas for me to understand my biases.” After a family tragedy, Bauer wrote, she and her husband looked into moving away from the city and into the country. “[O]n a chilly, silver January day, we drove into the Ozarks of Northwest Arkansas,” she wrote. “Though neither or us could put a finger on why, exactly, this felt like our place. Back home people were flummoxed: I hear them say a lot about white, rural Christians who reject outsiders and ‘cling to their guns.’”

Bauer soon discovered the irony of that bias: “[W]hat city folk don’t know is how beautiful it is here, and by that I mean way more than you imagine. We’re surrounded by low mountains, bony shale bluffs, forest, shining lakes and mysterious twisting roads. The wide-open sky brings every bird formation and low-hanging planet into relief. One Sunday in August, after yoga, we went to Home Depot. There was an old truck in the parking lot with a large American flag stuck upright in the bed and a handmade sign about the virtues of patriotism and God. Since our daughter joined the Navy, everything about the military makes me miss her. And the constant evangelizing feels like a threat to every spiritual inkling I have.”

But as people approached her to chat and drew her in with her warmth, Bauer realized she had misjudged these “white, rural Christians,” and that her views of them had been caricatures. Her crowd back home had been very diverse, but when she really thought about it, “One group of people we didn’t know well, to be honest, was conventional Christians. I saw their narrative as limiting and judgmental. But when I examined my feelings, they made no sense. My Jewish, Muslim, and for that matter, vegan friends could be just as dogmatic. This was a particular bias, the kind I claimed not to have.”

For the divide between the American elites and the “other” America to be bridged, it will take a willingness on all sides to actually consider our biases—and consider the possibility that on some things, at least, we might be wrong. Anne Bauer had to move to the South to realize that her biases clouded her view of her fellow citizens, but listening rather than displaying the mockery and contempt we saw from Don Lemon and Rick Wilson on CNN would be a good start. But if the election of Donald Trump didn’t teach them that lesson, then perhaps it will take a second term to do the trick.

Jonathon’s new podcast, The Van Maren Show, is dedicated to telling the stories of the pro-life and pro-family movement. In his latest episode, he interviews Dr. Charles Murray about why America has fallen apart and what we need to do about it. Dr. Murray first became well known in 1984 with the publication of Losing Ground a piece which is credited with being the intellectual foundation for the Welfare Reform Act. Murray is a New York Times bestseller, political researcher and scholar, and the F.A. Hayek Emeritus Chair in Culture Studies at the American Enterprise Institute.