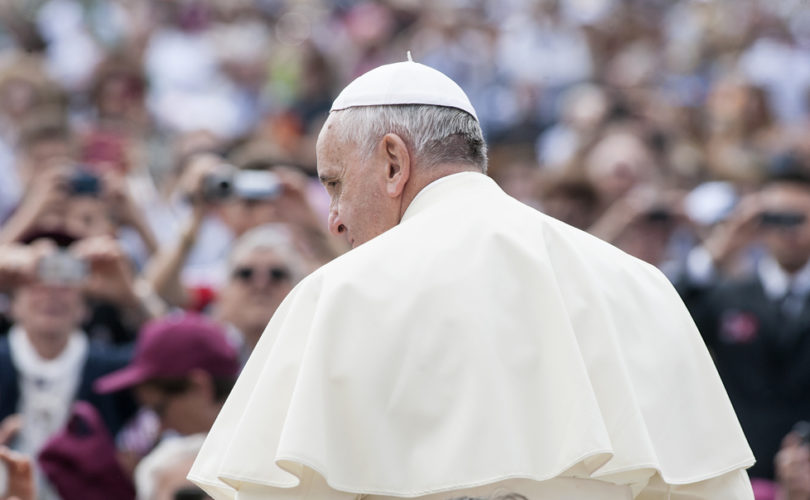 December 2, 2015 (LifeSiteNews) – LifeSiteNews’ publication of a news story detailing Pope Francis’ statements on the plane returning from Africa on November 30 has caused much reaction. I will admit it’s hard to believe the pope actually said what he did. I had the same reaction when I saw his comments to the Lutheran Church in Rome about communion. I would have found it hard to believe if I couldn’t watch the video myself.

Some reaction to our coverage suggested that we used faulty translation and did not put the Pope’s words into context. Therefore we’ve put together the video of the Pope’s remarks on the plane about condoms with the official Vatican English translations (Vatican Information Service) at the bottom of the video. In those instances where the Vatican omitted translation we’ve supplied the missing words.

Therefore you can see for yourself what the pope said, in the context given by the Vatican. We stand by our earlier coverage.

The Vatican’s own rendition says, “A South African correspondent commented on the devastation caused by AIDS in Africa, where the epidemic continues, and where prevention is still the key. He asked the Pope whether or not it was time to change the Church's position on the use of condoms.”

Here is the full text of the Pope’s response as rendered by the Vatican Information Service:

The question seems to me to be too narrow, or rather a partial question. Yes, it is one of the methods; the morality of the Church finds itself before a perplexity: it is the fifth or the sixth commandment, defending life, or that the sexual relationship must be open to life? … This questions makes me think about what they did to Jesus once. 'Tell me Master, is it lawful to heal on the Sabbath?'. It is obligatory to heal! … But malnutrition, the exploitation of people, slave labour, the lack of drinking water: these are the problems. Let us not ask if we can use this sticking plaster or another for a small wound. The great wound is social injustice, the injustice of the environment, the injustice that I have mentioned such as exploitation and malnutrition. … I do not like to make reference to such specific cases when people die for lack of water or hunger, because of their habitat. … When everyone has been healed, when there are no longer these tragic diseases caused by mankind, either by social injustice or to earn more money. … Then we can ask the question, 'is it lawful to heal on the Sabbath?'. Why do they continue the production and trafficking of weapons? Wars are the greatest cause of mortality. … I would say, do not think about whether or not it is lawful to heal on the Sabbath. I would like to say to humanity: ensure justice, and when everyone is healed, when there is no more injustice in this world, we can talk about the Sabbath.

Please see the video for the full remarks:

Confusion about condoms leads to violation of 5th and 6th commandments