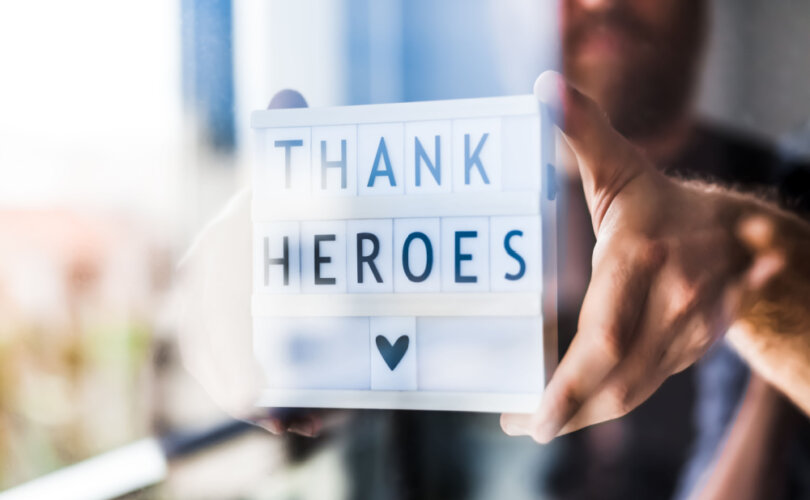 (LifeSiteNews) — You may not be aware of it, but we are truly in a time of heroes, and LifeSite has been playing a large role in letting you know who many of the genuine heroes of our time are. I can’t emphasize enough how wonderful and important that is. They constantly give us hope, encouragement and inspiration.

Whenever there has been a time of darkness in the past, there always arise in response heroic persons who become shining lights illuminating the darkness. Archbishop Vigano is especially one such person. The admittedly very dark time that we are in now is also producing many such shining lights to inspire and lead us.

Perhaps you have not been aware of these heroes because all the negative news has overwhelmed you. Just in today’s LifeSiteNews articles, we report on several of them.

All of us at LifeSiteNews take the greatest delight in reporting stories about heroes. Otherwise, you might never hear about most of them because the mainstream media are not interested in, and usually despise and want to destroy, the types of heroes whom we most admire.

First off, we frequently report on pro-life heroes saving babies and their mothers from abortion. There is a large number, in the hundreds of thousands around the world, of such heroes today.

Andrew Huff is bravely attesting that COVID-19 was artificially created and escaped from China’s embattled Wuhan Institute of Virology (WIV). This takes courage, knowing how evil and ruthless are those behind the plan to use Covid to force us all to be jabbed with the ultimate purpose of bringing in the digital ID system.

Florida Republican Gov. Ron DeSantis told attendees at a private GOP event Saturday that he plans to hold Pfizer and Moderna “accountable” for not being transparent about their drugs’ side effects, of which he says “we know there are a lot.” Finally!

Governor DeSantis has been consistently fighting many battles and amazingly winning most of them for the people. He has proven to be a wonderfully refreshing, trustworthy contrast to the self-serving cowardice and/or deep corruption that we have been seeing from most U.S. politicians in recent years. DeSantis is without question a U.S. hero and a truly conservative shining light within the otherwise largely dissolute U.S. political scene.

U.S. Nurse whistleblower Michelle Gershman and Dr. James Thorp have been exposing an alarming increase in deaths of unborn children whose mothers were COVID-19 jabbed. Thorp charges that “pushing an experimental gene therapy in pregnant women” is “the most egregious ethical disaster in the history of medicine. It’s an unparalleled disaster.” Both of these heroes are being subjected to threats and criticisms from the corrupt medical/pharmaceutical establishment that has thrown out the Hippocratic Oath. We owe these two wonderful heroes, and many more like them who we have reported on, much gratitude.

In Canada, as we report today, Toronto Catholic School trustee Mike Del Grande has for many years fought a lonely battle and been a heroic defender of the rights of his school boards’ children to a non-abusive, moral, solidly Catholic education without LGBT and Communist Critical Race Theory brainwashing. We tell you about him so that some readers will support this elected person who has been incredibly faithful, year after year, against seemingly hopeless odds and hateful opposition from fellow Catholic trustees, educators and even some Catholic clergy and bishops who barely recognize this very competent and experienced trustee’s existence.

Another hero today is former Canadian Supreme Court Justice John C. Major, who has put his support behind the province of Alberta’s newly tabled “Sovereignty Act” and publicly asked, “What’s so terrible about the province (Alberta) saying, ‘If you (the Trudeau government) want to impose on us, you better be sure you’re doing it constitutionally?” In Canada, the land of “nice” people, it takes guts for a former Supreme Court Justice to do what Major just did.

Former Liberal MP Dan McTeague has blasted the “insanity” of Prime Minister Justin Trudeau’s destructive “climate change” agenda. McTeague, who has been a solidly pro-life MP for many years, has taken on all the media and the ascendent globalist totalitarians with his comments against the fake “climate change” religion. God bless this hero for putting to shame all the others who have fallen for this scam, are in on the large-scale money bribery to support it, or at least have refused also to speak out and defend the public from the great harm they are enduring from these “climate change” policies.

And in Brazil, there are millions of heroes protesting for 32 days straight for freedom from a likely rigged election that is benefiting the upcoming Great Reset slavery system.

This is Day 6 of our 25-Day Countdown to Christmas campaign. The above is only a minuscule portion of the numerous heroes who we tell you about throughout every year. We need your donations to be able to keep doing this for you and to provide justice for all of those brave people who put themselves on the line for all of us.

LifeSiteNews could be called a news service on behalf of heroes.

Please make your gift for heroes today by clicking on give.lifesitenews.com.