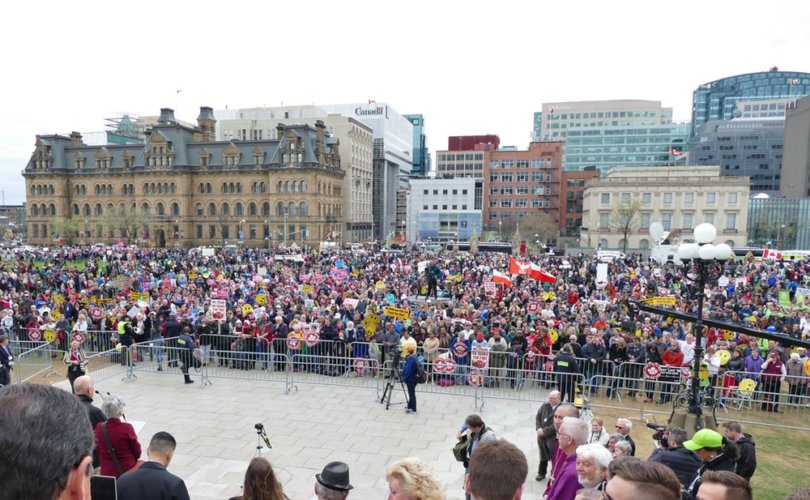 OTTAWA, May 12, 2017 (LifeSiteNews) — Canadian pro-lifers will likely hear that numbers were down at the March for Life, although enthusiasm and devotion were, as always, high. This was the 20th anniversary of the annual event, held the Thursday before May 14, when abortion was legalized under Pierre Trudeau. I (along with many others) have been to nearly every one, missing two due to travel, if memory serves. It is always a beautiful and enriching experience, even though motivated by the tragedy of the innumerable attacks against life, as pro-lifers gather together, meet each other, catch up, and realize that they are not alone.

I pondered why the numbers were not what they perhaps should be as I arrived on Parliament Hill, and noticed there were not as many school buses, with far fewer students from elementary or especially high school. Of course, if students do not get the day off, and are not transported to the event, almost none of these young potential pro-lifers will go. I heard in passing that even amenable school boards may now refuse to send students out of fear for insurance claims and the danger the 'protesters' present. Given the presence of dozens of police officers, and the even smaller number of rather pathetic protesters, they need not worry. There were the usual pro-abortion suspects, tragic-looking women with bare midriffs, holding hastily-written placards with such slogans as “If you don't like abortion, don't have one!” Well, that's not really the point, is it?  If you don't like murder, then don't kill?  Hmm. One pro-abortion protester of the male persuasion held up a sign that said, “If you take away their reproductive rights, we'll take away yours,” replete with a scribbled pair of bloodied, detached testicles. Again, hmm. I don't think they understand the nature of 'analogy', and could use a basic course in Aristotelian logic. That may move the debate forward. But they are not really interested in debate or dialogue.

But back to the pro-lifers and the attenuated numbers: Without the plethora of semi-voluntary student attendance, on a Thursday, many people who are not in school have to work. There is also the vast area of Canada, with its dispersed population, making travel difficult and onerous. In the American March for Life, which they hold at the end of January in Washington, there are many millions of people living within easy driving range of the capital. But I have also heard of many Americans driving vast distances to attend their March, as do a number of Canadians. One way or another, the numbers south of the border are in the six digits. It is, as they say, an 'event' that one would not want to miss, something I and others had hoped would be the case for Canada's March also.

Besides the drop in student numbers, I cannot help feel that a sense of complacency is settling into not only the broader society but even our hopefully stalwart pro-life souls, of 'what's the point,’ and ‘what good does all this do?’ We march, protest, write letters, pray and sacrifice, yet here we have nearly a half-century of legal abortion in Canada, with more than half of that with no restrictions whatsoever – in effect, no law. It is, as the saying goes, a decision between a 'woman and her doctor.’ Now, not even that, for any woman can get an abortion for any reason from any physician, whether her own or not, all paid for by the government, which means, by you and me.

Saint Thomas Aquinas states that law works in two ways: Pedagogically, teaching us what we should do, and coercively, requiring us to do it by 'force and fear,' should we be inclined to disobey.

One cannot help but think that abortion has been legal for so long, that most people in Canada now consider it perfectly legal, moral, even normal, and that to be 'against abortion' is a sign of anarchy, fascism, even mental illness. The same is now happening with euthanasia, even more rapidly, as we have been accustomed to state-sponsored death for some time now.

Pope John Paul II teaches in Evangelium Vitae that the primary way that one builds the 'culture of life' is to live a moral life, doing one's duty of the moment, fulfilling one's vocation, raising children, spending time with family, taking care of the elderly and sick, all those little things that make up the life of sanctity and the way to heaven.

He also declares that the two primary underlying causes of abortion are the contraceptive mentality and the trivialization of sexuality, both of which breed a selfish, self-absorbed and hedonistic mentality, whereby one perceives any child conceived as an 'enemy' and an 'intruder' who has no right to be there; in fact, has no rights at all, unless such 'rights' are bestowed upon him by the whim and 'choice' of his mother, which may fluctuate and change at any point (definitely not his father, who also has no rights in this regard). Infanticide cannot be all that far away.

Abortion is a symptom and an effect of a far deeper and more complex moral decrepitude in our society, all that is entailed in what the Holy Father memorably termed the 'culture of death,’ but that does not mean that we stop protesting. For abortion is the culmination of this evil, the wholesale and widespread murder of innocents in the first phase of their existence. We cannot let it just stand. Rather, we must stand up and be counted, for these children cannot, even if we see such gestures as 'futile' in a worldly sense. For we do not it for the world, but for God, for the babies, for each other.

John Paul Meenan is Assistant Professor of Theology and Natural Science at Our Lady Seat of Wisdom for Studies in the Liberal Arts. He writes regularly, and edits Catholic Insight online magazine.