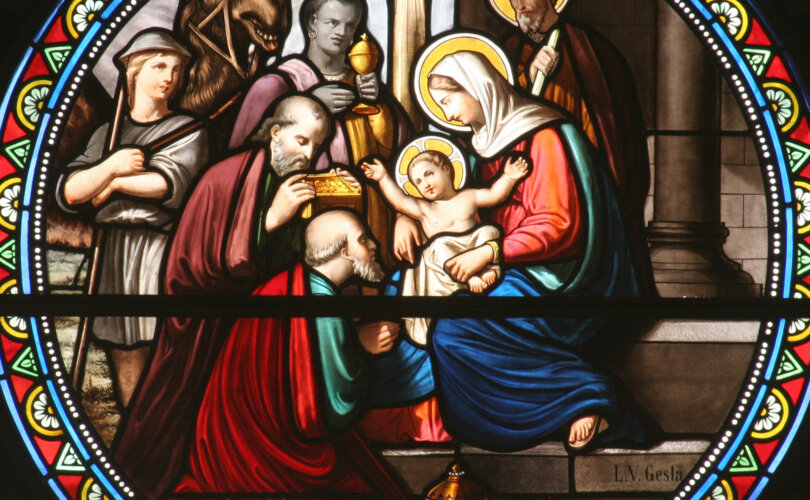 (LifeSiteNews) – As the old carols of the Christmas season remind the Christian soul, the little town of Bethlehem points, finally, to Jerusalem, and the wood of the manger foreshadows the Cross. In fact, the Cross is already present when Christ is born: He comes forth in the cold of a bleak mid-winter and the darkness of a silent night. He is born in the obscurity of a hillside cave, with the breath of the ox and ass to warm Him. Placed before the manger, the adoring caroler, in wonder, sings,

Why lies He in such mean estate, where ox and ass are feeding?

Nails, spears shall pierce him through, the Cross be born for me, for you.

Hail, hail the Word made flesh, the Babe, the Son of Mary.

The latter words of this beautiful and well-known carol, “What Child is This”, have been struck from many modern versions, as have other references in other old carols to the Cross, original sin, and the misery of this world without the redemption promised in and accomplished by Christ’s coming in the flesh.

In a rarely printed or sung reference to original sin, the third verse of “Hark the Herald Angels Sing” invokes Christ as “the Woman’s conquering Seed,” a title taken from Scripture’s first prophecy that God would send a redeemer, born of a woman, who would crush the head of the serpent—a prophecy given to our first parents just after they sinned and were banished from the garden of paradise. In such carols, Christ’s Birth is sung as the beginning of man’s redemption, a redemption culminating in the Cross.

Come Desire of nations, come: Fix in us thy humble home!

Bruise in us the serpent’s head!

Stamp thy image in its place!

Second Adam, from above,

Reinstate us in thy love!

In another beautiful carol, “The Holly and the Ivy”, the Christian dwells on Christ’s Passion by turning his gaze back and forth between the simple Christmas greenery of the holly, Christ’s sufferings and Passion, and His Birth, weaving them together much like the holly and the ivy of which the carol sings.

The holly bears a berry as red as any blood,

The holly bears a prickle as sharp as any thorn,

And Mary bore sweet Jesus Christ on Christmas Day in the morn.

The holly bears a bark as bitter as any gall,

And Mary bore sweet Jesus Christ for to redeem us all.

In Christian tradition, the mystery of Christ’s Nativity is always understood in relation to the working out of our redemption. The latter is the purpose of the former. As the Venerable Fulton Sheen once wrote, “Every other person who ever came into this world came into it to live. He came into it to die …. To Christ, death was the goal and fulfillment of His life, the gold that He was seeking.”

The manger and the Cross thus stand at the two extremities of the Savior’s life! He accepted the manger because there was no room in the inn; He accepted the Cross because men said, “We will not have this man for our king.” Disowned upon entering, rejected upon leaving, He was laid in a stranger’s stable at the beginning, and a stranger’s grave at the end. An ox and an ass surrounded His crib at Bethlehem; two thieves were to flank His Cross on Calvary. He was wrapped in swaddling bands in His birthplace, He was again laid in swaddling clothes in His tomb — clothes symbolic of the limitations imposed on His Divinity when He took a human form…

He was already bearing His Cross — the only cross a Babe could bear, a cross of poverty, exile and limitation. His sacrificial intent already shone forth in the message the angels sang to the hills of Bethlehem: “This day, in the city of David a Savior has been born for you, the Lord Christ Himself.”(Luke 2:11)

Mild he lays his glory by,

born that man no more may die,

born to raise the sons of earth,

born to give them second birth.

Meditating upon the mystery of our redemption at a time when the world can only celebrate in a manner devoid of both Christ and the Cross He came to suffer—giving no thought to the misery of sin, nor the hope and consolation of Christ’s redeeming Birth and Death—will help assure that we enter into the mystery of Christ’s Nativity in the way in which He wishes, namely, rejoicing in the salvation He came to accomplish when He was born into this sinful world of ours and shed His Blood on the Cross. In this way we will dispose our soul to receive the many graces the Christchild wishes to give us this Christmas.