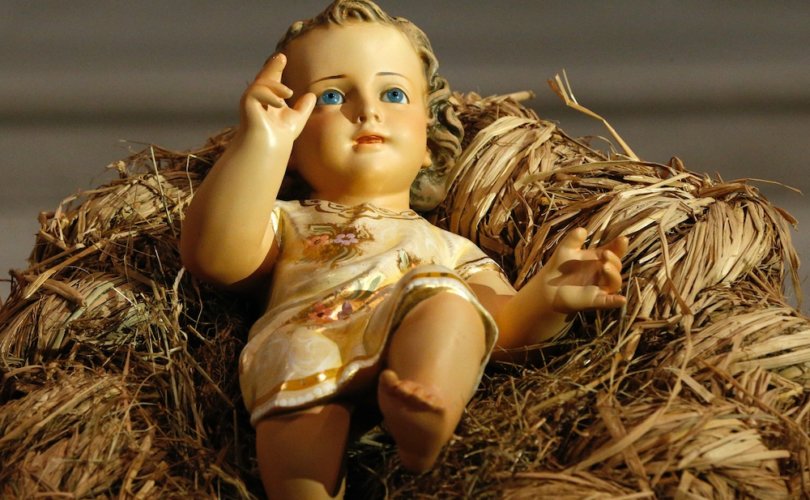 ENGLAND (LifeSiteNews) – Advent 2021 is very much a tale of two verses drawn from the Church’s daily prayer, the Divine Office. Throughout Advent, the verse and response following the hymn in Lauds have announced the impending arrival of the Christ Child and the need for preparation.

“A voice of one crying in the wilderness: Prepare the way of the Lord. Make straight his paths,” reads the traditional Breviary.

These lines have struck me because they can be read in two ways. One, of course, is the straightforward manner: they enjoin us to make this season of Advent a good preparation for the approaching solemnities and beauties of Christmas. But the other sense, while less obvious, seems just as appropriate.

The second sense is based on acknowledging the reality of the world today. There is no denying the horrors of our times as we approach Christmas, nor could we easily ignore them if we wished.

Let’s name just a few. Austria is enforcing medical tyranny on its citizens, and the unvaccinated face crippling fines and even jail. Australia and New Zealand continue to lead the way in endless restrictions and coerced COVID injections. Australia and Germany have made ‘conspiracy theories’ reality by constructing so-called quarantine camps, which are guarded by security and enclosed with wire fences.

Faced with a world in which political authorities seem to be repeating historical atrocities and Church authorities make regular semi-heretical statements, it’s impossible to ignore such evils completely, even during this beautiful Yuletide season. I make no apologies for bringing them up, even at Christmas time, for they’re just reality.

But here the lines from Lauds come into their own. During persecution at any and every level, life is transformed into a period of preparation for the coming of Christ. With every crushing law that is passed, the joys and freedoms of the world are stripped away until all that remains is one’s faith, one’s progress in the path to follow Christ, the Way.

This current persecution – for let’s call it what it is – is a longer, harsher ‘advent’ (small a) in which the pruning is more severe than any self-selected penance. Nevertheless, the call of St. John the Baptist retains its authority, for it is a time to wholeheartedly “prepare the way of the Lord.”

These times are truly an advent in which we must “prepare the way of the Lord” just as much as, if not more than, we do in every Advent. But that is not to say we should despair and have a gloomy Christmas. Indeed, the joy of Christmas always follows the trials of Advent, and so it is with this historical ‘advent.’

For here the second verse comes into play. This is the verse and response used at Lauds on Christmas Day itself: “The Lord hath made known, alleluia. / His salvation, alleluia.”

Advent is indeed a period of trials, preparations, and sacrifice, all of which are rewarded with the beauty of the arrival of the Christ Child, who makes known His salvation.

This current period of trial and persecution is no different. As Our Lady of Fatima promised, “… In the end, my Immaculate Heart will triumph.” No matter what the persecutions, the hardships, and the penalties which are thrown at people in every corner of the globe, we can take heart from these words of the Church and of Our Lady.

— Article continues below Petition —
SIGN: Show Pope Francis the Latin Mass will survive any suppression
Show Petition Text
36520 have signed the petition.
Let's get to 40000!
Thank you for signing this petition!
Add your signature:
Show Petition Text

For if we use this ‘advent’ to prepare the way of God, ensuring that, more than anything else, we remain true to Him, then we can be comforted by the promise of the words proclaiming the Lord’s salvation, recited on Christmas morning.

Meditating on these two phrases of the Church’s daily prayer, we know we don’t need to spend Christmas trying to suppress thoughts about increased restrictions, state-imposed penalties, the scandalous behavior of, and false teaching from, the Church’s hierarchy.

Rather, we must bear in mind two things: the Baptist’s call rallying us all to keep the faith, and Christ’s victory over sin and darkness through His death on the cross.

No matter how dark these days seem, and they are suitably dark for sure, it is an invaluable comfort to realize, aided by these two verses, that God is always in control.

Hope ensures that no matter what onslaught he might face, the Christian can continue his path knowing that Christ does not allow trials without also providing the necessary graces to deal with them.

Any hardship we are called to endure, Christ helps us to bear it. During His agony on the Cross, he even gave us His own mother to be our mother. The Mother of Sorrows knows more than anyone what it means to suffer for love of God, and she encourages and assists those who turn to her for help.

Thus, while the anti-life, anti-family, anti-truth, anti-Catholic forces worldwide rage so furiously in their bitter attempt to establish a satanic rule of fear and death, we can find comfort in a few simple words:

“Prepare the way of the Lord. Make straight his paths…The Lord hath made known his salvation.”

Michael Haynes is a journalist writing for LifeSiteNews. Originally from Cheshire, England, he is a graduate of Thomas More College in New Hampshire. Since childhood he has been very involved in pro-life activity and defending the Catholic faith through public campaigns. Michael writes on materdolorosa.co.uk, and has authored works on Mariology (Mary the Motherly Co-Redemptrix), Catholic spirituality, and most recently published an apologetic work “A Catechism of Errors.” His great love is the Traditional Latin Mass.