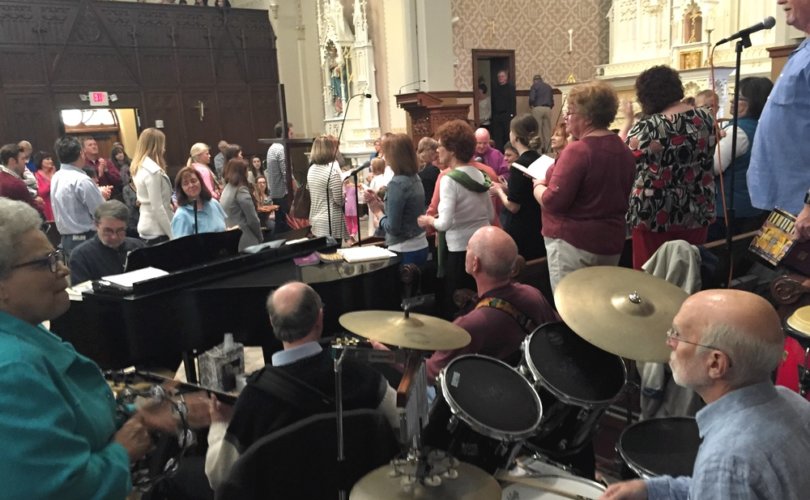 The band at a U.S. Catholic parish plays the tambourine and drums during Mass in this photo from 2015.LifeSiteNews

In this sacrament [of the Eucharist] both a greater devotion is required than in the other sacraments, owing to the fact that the whole Christ is contained in it, and also a more extensive devotion, because in this sacrament the devotion of the whole people is required, for whom the sacrifice is offered, and not only the devotion of those receiving the sacrament, as in the other sacraments. And for this reason, as Cyprian says (On the Lord’s Prayer, ch. 31), “The priest, saying the preface, prepares the minds of the brethren, by saying: ‘Lift up your hearts’, in order that, when the people responds: ‘We have lifted them up to the Lord,’ they may be reminded that they should think on nothing other than God.”

What a remarkable passage! The Angelic Doctor is telling us that the liturgy of the Mass ought to stir up a devotion deep and wide in the people, as befits so great a sacrifice, that we may think on nothing other than God. As the Byzantine Divine Liturgy likewise witnesses: “Let us who mystically represent the cherubim and sing the thrice-holy hymn to the life-creating Trinity now set aside all earthly cares.”

In this life we cannot emulate the cherubim perfectly, so as to be perpetually caught up in the heavenly liturgy; some earthly thoughts and emotions will always cling to us. But the Church has always voiced her protest whenever composers and musicians allow those earthly thoughts and emotions to set up camp inside the temple and dominate the scene.

Inspired by the teaching of Jesus, nourished by His life-giving Body and Blood, our calling as Christians is to bring holiness from the altar into the world, and, as much as we can, to transform the world, renew it, sanctify it by the power of the sacred mysteries. Christians have never seen it as their job to bring elements of the fallen world from the outside into the temple, remaking liturgy, preaching, and art forms into reflections of that world. For even if they are “toned-down” reflections, still they have their origin not from God, but from the world, and they carry worldliness with them.

Might there not be a connection between, on the one hand, postconciliar attempts to replace the hierarchical nature of the Church with a democratic model borrowed from Enlightenment humanism, and on the other hand, the decline in the quality of sacred and religious music, which now celebrates man instead of God, and only really succeeds in showing the banality and poverty of man without God?

If we want to know how the Psalms or other texts from Scripture should be sung, we should listen to the successors of the Israelites chanting the Hebrew “songs of Sion,” namely, the faithful monks and nuns who have committed their lives to “singing wisely” (cf. Ps 46:8). An attentive ear can in fact pick out the musical parallels between Jewish cantillation and Christian psalmody, whether Latin or Byzantine. If you listen to a recording of the monks of Le Barroux, Fontgombault, Norcia, or Silverstream, you will hear the sound of sung prayer—reverent, adoring, and contemplative, savoring the sacred words like honey (cf. Ps 118:103), with passions at peace and the mind lifted up to heaven and to the Most Holy Trinity.

“Eaten up with zeal” (Jn 2:17), Jesus drove the money changers out of the temple precincts, even though what they were doing was a good bit less objectionable than much of what goes on in the very sanctuary of Catholic churches today. Why did Our Lord, gentle as He was with sinners, act that way? It is because Christ, more than any worshiper who has ever lived or ever will live, knows the importance of purity of worship, the need to keep a separation between the worldly and the sacred. He alone felt and knew to the depths of his uncreated being how unworthy of the living God were the motives, manners, and merchandise offered by those tradesmen.

When a person enters the temple, he puts behind him the business and pleasures of the world and strives to worship God with his whole heart, his whole mind, his whole soul. And this wholeness of dedication and devotion is supposed to spill over from the temple into the world, so that the more a person worships, the more he is conformed to the mysteries he celebrates—becoming, as it were, a living embodiment of the liturgical rites even in his secular pursuits.

The goal is not to secularize the sacred and make it more “accessible” to the mentality of the age (this would border on sacrilege), but rather to sanctify the secular, and make it holy by changing it for the better. The church is the domain of the sacred, not the home for an adapted, accommodated worldliness.

The Church is supposed to win our minds and hearts for the sacred, so that this victory may permeate the rest of our lives in the world. “Christian rock,” or even the mild folksy style of the St. Louis Jesuits, is nothing less than a victory of worldliness, a byproduct of unresisted cultural imperialism, a contamination of the silence and plainsong that should reign in the house of God, where the spirit breathes freely and the emotions are gently stilled.

Many books and articles (such as this, this, or this) have been written on ecclesiastical guidelines for music intended for worship and on the noble ideal of singing the Mass, not merely singing at Mass—doing so, moreover, in continuity with the glorious heritage of sacred music that the Spirit of the Lord has breathed into his Church down through the centuries.

Here, in conclusion, I wish only to suggest a good starting point for an “examination of musical conscience” that may lead to a change of heart, to new resolutions and concrete initiatives. Session 22 of the Council of Trent challenges us to do all that we can to make our offering of the liturgy worthy of its inner nature:

What great care is to be taken that the holy sacrifice of the Mass be celebrated with all religious devotion and reverence, each one may easily conceive who considers that in the sacred writings he is called accursed who does the work of God negligently (Jer 48:10). And since we must confess that no other work can be performed by the faithful that is so holy and divine as this awe-inspiring mystery, wherein that life-giving victim by which we are reconciled to the Father is daily immolated on the altar by priests, it is also sufficiently clear that all effort and attention must be directed to the end that it be performed with the greatest possible interior cleanness and purity of heart and exterior evidence of devotion and piety.

Such words call us to shape anew and deepen our conceptions of musical and liturgical fittingness. When all is said and done, we still hear St. Paul calling out to us across the ages, with the Fathers of the Church, with the Council of Trent, with St. Pius X, with John Paul II and Benedict XVI: “Do not model your behaviour on the contemporary world, but let the renewing of your minds transform you, so that you may discern for yourselves what is the will of God—what is good and acceptable and mature” (Rom 12:2).

This article is related to two earlier LifeSite articles, here and here.