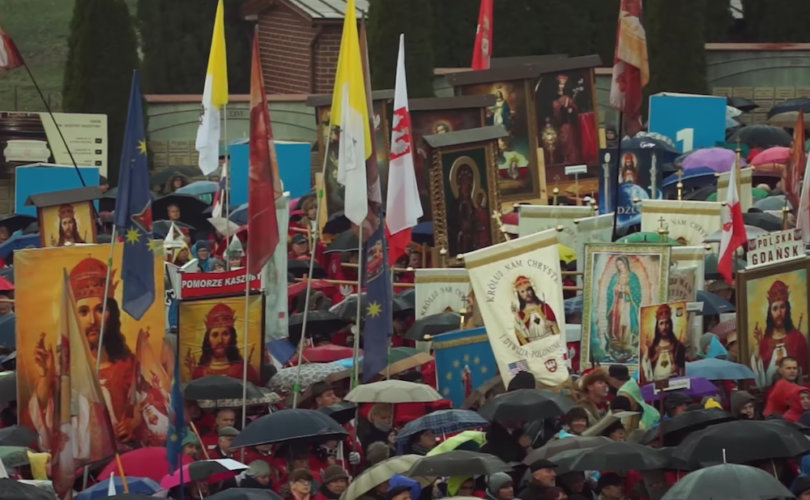 Poles gather for a Year of Mercy celebration.

WARSAW, Poland, August 4, 2017 (LifeSiteNews) — On Tuesday at 5 p.m., the city of Warsaw came to a halt as air raid sirens split the air. Instead of diving for cover, drivers and pedestrians remained motionless for a solid minute. Then they went about their business, leaving bewildered foreign tourists open-mouthed.

Why? Because it was the 73rd anniversary of the start of the Warsaw Uprising, and Warsaw remembered. The Uprising, lasting from August 1 to October 2, 1944, was the angry city’s most concerted effort against the Nazi occupation. The Soviet allies were just outside Warsaw. The Poles expected them to take advantage of the Uprising and help defeat the Germans. They didn’t. Stalin had his own plans for Poland’s future.

During and in the immediate aftermath of the Warsaw Uprising (not to be confused with the Warsaw Ghetto uprising of 1943), approximately 16,000 members of the Armia Krajowa (Polish resistance) were killed and between 150,000 and 200,000 Polish civilians were massacred. Twenty-five percent of the city’s buildings were destroyed during the two months of battle, and afterward the Germans deliberately razed the city block by block so that only 15 percent of Warsaw’s original buildings remained. The pretty historic center that tourists see today is a  brick-by-brick reconstruction.

The Nazis despised the Poles as “subhuman Slavs” and hoped to wipe Warsaw off the face of the earth. They failed. They failed even from entirely subjugating Poland during the occupation, for the Poles kept fighting, both at home and abroad beside foreign banners. After the defeat of France, more than 20,000 Polish soldiers landed in Britain to prepare for a rematch. By 1944, there was an army of 195,000 Polish soldiers in the West alone. They were not officially disbanded until 1947, and as those of us alive in 1989 saw, the dream of freeing Poland from the new Soviet yoke never died.

“Pamiętamy” (“we remember”) is the slogan of the anniversary of the Warsaw Uprising. It could also be the secret of Poland’s cultural power, which remains strong even as other western nations, like the United Kingdom, France and Germany, slide helplessly into civilizational decline. The descent of Britain has been well-documented by Peter Hitchens, brother of Christopher, and Anthony Daniels (aka Theodore Dalrymple). Therefore, although I live in Britain, I will confine my remarks to the secrets of Poland’s ability to remain, despite a devastating war, 45 years of Communism and the Sexual Revolution, Polish.

Enduring importance of fathers in the home

The 2012 film Jesteś Bogiem (“You are God”), which told the story of a Polish hip-hop band, failed hilariously to express how poor Poland was in 2001. Sure, the buildings were crumbling and one of the boys had a Walkman in constant need of repair by his father. But his father lived with him at home. All the hip-hop loving boys had fathers at home. Even today, only 3.7 percent of Polish households are composed of a single parent with kids.

When the band’s big star gets his girlfriend pregnant, they marry before the baby is born. Today, 23.3 percent of Polish households are composed of a couple and their children. This is not the biggest figure in Europe (Ireland wins there), but it is quite a contrast to Sweden’s 14.4 percent  and Germany’s 15 percent.  And although the out-of-wedlock birth rate has skyrocketed since 1990 (24.6 percent from 6.2 percent), it should be considered in relation to the rest of central Europe. In Bulgaria, 58 percent of babies born in 2015 were out of wedlock.

But statistics do not adequately express the enduring importance of family in contemporary Poland. Anyone who has a nodding acquaintance with the country, or even its films, can attest to the strength of its family bonds, which survive even death. On Halloween, all living Poland goes to its cemeteries to tend the graves of, and pray for, its dead. The hundreds of thousands of candles lighting up the cemeteries of southwestern Poland is an airplane view I will never forget.

The elephant in the Polish living room is its low birth rate — only 1.3 children per Polish woman living in Poland. However, Polish women living in the richer United Kingdom have 2.13 children, a figure significantly higher than the 1.9 children of British women. This suggests that it is economics, not a distaste for children, that is to blame. The conservative, family-friendly Polish government has taken steps to lessen the financial burden on parents, and they seem to be working, as in 2016 16,000 more babies were born in Poland than in 2015.

Although there are attempts by tastemakers to get the Poles more interested in the paganism of their pre-966 AD, the vast majority of Poles (86 percent) are still Roman Catholics and a whopping — for Europe — 40 percent to 45 percent  — still attend weekly Mass. Compare this with Scotland, where only 19 percent of the country’s small Catholic minority bother. Meanwhile, in 2014, 83 percent of Poles said they kept the Good Friday fast. (Quixotically, only 48 percent went to Church on Easter Sunday.) And about 25 percent of Europe’s younger priests are Polish.

Again, statistics alone do not adequately tell the story. On my first visit to Warsaw, I was astonished to discover a church on Marszalkowska Street absolutely packed with worshippers on a dark Friday evening. When I mentioned this to my host, he was puzzled that I would find this at all unusual. “But it was a First Friday,” he said.

Jesus is king and lord of Poland

The influence of Saint John Paul II, of course, was an enormous boost to Polish Catholicism while he was alive and still endures today, particularly in the city of Krakow, whose archbishop he once was. The Polish Bishop Conference remains a byword for Catholic orthodoxy; no matter how influential the German bishops have become under this pontificate, leaders like Archbishop Stanislaw Gadecki keep the Church in Poland on course. Mary Wagner, the Canadian pro-life prisoner of conscience, is a household name in Poland.

Meanwhile, in November 2016, the Polish Bishops, with leading Polish politicians in attendance, formally celebrated the enthronement of Jesus Christ as King and Lord of Poland. Jesus’ mother Mary has been venerated as the Queen of Poland for more than 300 years.

In contrast to the corrosive disgust for the past destroying other European nations, Polish pride in being Polish is flourishing. A 2016 survey conducted by the Polish Centre for Social Opinion Research revealed that 88 percent of Poles surveyed considered themselves patriots; 43 percent declared themselves very much so. Fully 98 percent of surveyed Poles in leadership positions described themselves as patriots, and 95 percent people with right of center views surveyed were patriots.

Interestingly, the groups of Poles least likely to describe themselves as patriots were 18-24-year-old students (25 percent), the unskilled (15 percent) and the least educated (14 percent). However, 96 percent of all respondents felt pride in the accomplishments of Polish athletes, 91 percent read about Polish history and an astonishing 79 percent attended public ceremonies and celebrations. According to the study, Polish patriotism has increased since 2010. That said, only 7 percent of Poles call themselves “nationalists” — which by most definitions they are — probably because of the negative publicity attached to the term.

‘Poland has not perished so long as we still live’

The Polish national anthem, written two years after the Third Partition wiped Poland off the map, begins with a challenge to history: “Poland has not perished so long as we still live.” No matter how many times the borders of Poland are erased or changed, and no matter what power rules over territory lived in by the Polish people, Poland itself cannot be destroyed. This is because, like the Jews, the Poles are a people who transcend geography.

What makes Poles Polish is not political power or self-governance or even citizenship. Polishness is determined by a shared language, a shared literature, a shared “majority religion” that inescapably influences Poland’s tiny minority religions, and a shared history.

Poles know their history, perhaps because they have been doomed to repeat it. The most cursory glance at the past 300 years of Polish history reveals invasions, foreign rule, massacres of Poles, particularly of Polish leaders and intellectuals, and — very tragically — the treason of Poland’s German minority in 1939. Many Germans in Poland collaborated with the Nazis, sometimes providing kill-lists of Polish notables to officers from Germany.

The 21st century Poland has also suffered from an enemy within. In 2007, a Cameroonian anti-racism activist feted by Poland’s left wing, soi-disant “refugee” Simon Mol, was charged with knowingly infecting several Polish women with HIV. Allegedly Mol told women that wanting to use a condom with a black man was racist. The Polish trial of the century ended with Mol’s death from AIDS in 2008. Knowledge of Polish history should offer clues to why Poland hasn’t gone along with Western Europe’s new love affair with multiculturalism — and open borders activism.

Left-wing Poles may cry out at this point that mentioning Simon Mol is a dirty trick, and that reminds me that Poland is not a political wonderland. The left and right sides of the aisle are quite as divided in Poland as they are in the United States. The Gazeta Wyborcza is just as biased as the Washington Post, if not more so.

However, this very similarity suggests that Poland can be imitated in better ways. The future of whole nations depends on a re-appreciation of the family as the living cell of society, on the preservation of Christianity, including the “cultural Christianity” recognized by such European atheists as Marcello Pera, and history taught so that children are both proud (not ashamed) to belong to their countries and on their guard against fallen human nature.

Rebuilding the family, nourishing our Christian roots and restoring love for our western histories may seem an impossible task. Like the Polish Home Army, we are fighting against the most terrible odds, abandoned by our supposed allies amid the ruins of our cultural homes. However, Western Civilization isn’t yet dead, so long as we still live. As some American said, let’s fight like the Poles.