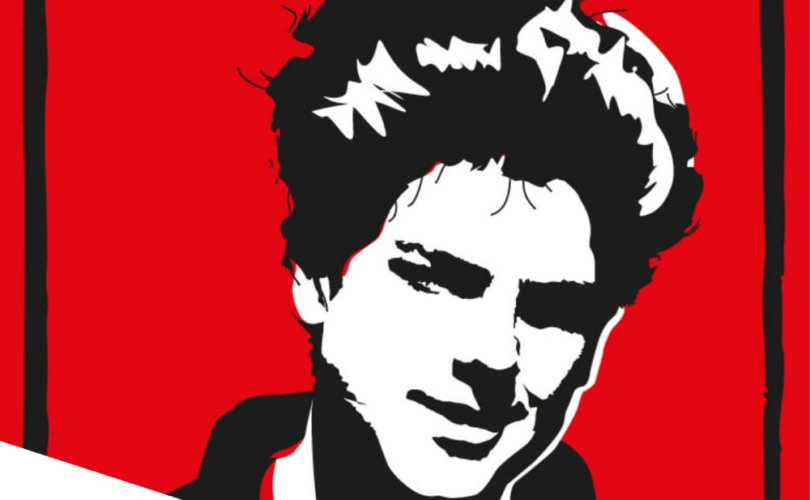 Two days before, I had published an article at OnePeterFive in which I had predicted just this kind of unfortunate headline:

When it comes to saints who had to live under the new cultural barbarism of our times, we have to be careful not to “canonize” along with their sanctity something incidental about their modern lives. This will happen quite often from this point forward. “Oh, Blessed Bobby was so into pop music! Isn’t it great that pop music is part of sanctity now, and it just doesn’t matter what you listen to or dance to?” or “Saint Suzy just loved to go around in sweat pants and a fluorescent pink T-shirt! I guess it doesn’t really matter how you dress anymore when it comes to being a saint.” One can imagine all kinds of scenarios and false inferences like these.

Teachers often come into contact with students who say, or imply, that everything about a saint (or a saintly person) is to be imitated or seen as ideal. “But so-and-so liked contemporary Christian music, treacly hymns, sentimental movies, Thomas Kinkade paintings, manga comics, etc., and he was a saint. Therefore, such things must be great and you can’t have any argument against them!”

God works with who we are in our human nature at any given time; He works with the characteristics, abilities, and talents we have. God takes our human nature in its imperfection and, if we are willing, sanctifies our souls, which does not mean correcting every natural flaw of mind or body, and sometimes means leaving certain flaws as weaknesses through which His power can triumph. Indeed, even the great Apostle Paul spoke of a “thorn in his flesh” from which he begged the Lord to deliver him, but God would not (see 2 Cor 12:6–7). To the point at issue, if someone has little or no taste in music, art, or literature, or a limited education, we know that God can still lead that person to Himself, working within those limitations, but not because of them. Note well: simply because they are not impediments to God’s action does not make them cease to be limitations — that is, privations of due perfections in a perfectible human nature.

Such a saint-in-progress will be gradually weaned of any inherently sinful attractions. But God does not ordinarily make an illiterate person into a Rhodes scholar or an accomplished artist, however generous He is in His gifts of actual and sanctifying grace. Even with a saint-in-the-making, it would require a real education of such a person’s human nature, and real effort on his part, to bring about improvements in those areas. This is not the job of grace — at least not necessarily.

Taking a person with a reputation for holiness as a model (or an excuse) in every respect results from a conflation of nature and grace, a denial of the gratuitousness of the supernatural order, that is quite common in our times, having entered the ecclesial bloodstream from de Lubac and Rahner. De Lubacians and Rahnerians collapse the distinction by seeing grace everywhere, in all things; one cannot find any reality that is not “always already” oriented to the Kingdom. On this optimistic reading it becomes difficult if not impossible to distinguish between what is proper to the order of faith, hope, and charity, and what is proper to moral and intellectual virtue, or the fine arts and cultural life (including artistic ability and good taste). It is obvious from human history that these orders are independent: some of the greatest geniuses have been pagans (Socrates, Plato, Aristotle), while some great saints have been unlettered and simple (porters, beggars, soldiers, etc.).

The distinction is not hard to make once you see that the powers of the soul are perfected by habits that come in two varieties, acquired and infused, and that the intellectual virtue known as art can develop and exist somewhat independently of the moral virtues, and vice versa (as I explain here). That’s why we can have outstanding works of art from unbelieving hedonists and mawkish third-rate trivialities from well-intentioned believers.

There is, nevertheless, a “subterranean” connection, in that people of sanctity will, as a rule, be repelled by what is egregiously ugly or unworthy of God. For example, while a holy person might tolerate some folk songs played on a guitar, he will recoil from moshing at a punk rock concert; as willing as he might be to watch some classic movies, he would never pollute his soul with the semi-pornographic and violent movies that have become the norm in the decadent modern West. While he might engage Protestants in friendly conversation with the hope of leading them to Catholicism, he would spurn the lily-livered “we’re all fine as we are” ecumenism of the postconciliar period; he would believe in the uniqueness and necessity of the Catholic Church and would understand the error of relativism and indifferentism. He would have the most profound veneration for liturgical tradition, to the extent that he understands it, and could never actually hold it in contempt, as the liturgical reformers of the 1960s did. It is for reasons like this that some of the beatifications and canonizations of recent decades present problems of conscience for traditional Catholics.

In an age of doctrinal confusion, we rely on that which is certain and clear over that which is tenuous and ambiguous. Similarly, Catholics should look primarily to those saints as examples and intercessors whose holiness is of heroic magnitude, brightly shining, confirmed by many great miracles, and whose human character is distinguished by its well-informed judgment of worldly goods and evils.