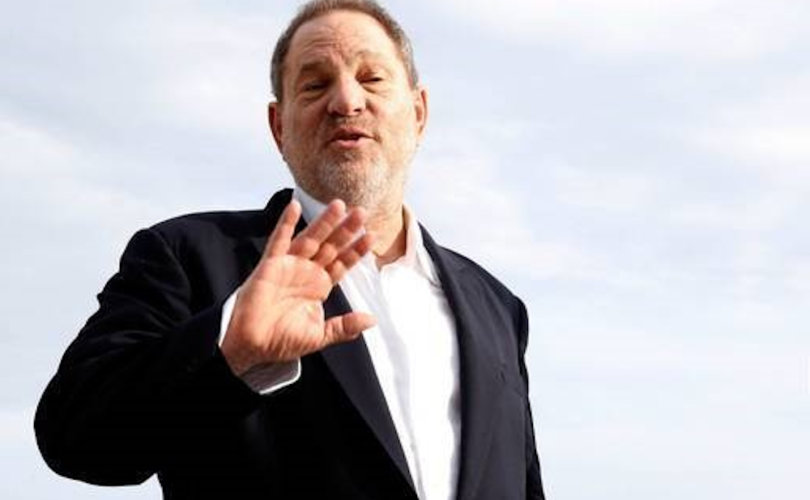 HOLLYWOOD, California, October 23, 2017  (LifeSiteNews) — If you’ve been staying in a monastery for the past few weeks, you may not have heard about the downfall of Harvey Weinstein, former Hollywood kingpin and, it turns out, boss from hell. So I’ll fill you in.

Harvey Weinstein, co-founder of the very successful American film company Miramax, has been accused by an increasing number of women in the film industry of offering them jobs in exchange for sex, of threatening to hurt their careers if they didn’t acquiesce or split on him, of indecent exposure, of sexual bullying, of sexual assault, and even of rape.

Apparently, “everyone” in Hollywood has known for 20 years that Weinstein was a sexual bully, if not an alleged rapist. But the scandal broke only on October 5 when The New York Times published a story saying several women, including Ashley Judd, had accused the Oscar-winning producer of sexual harassment.

Weinstein, who hosted several fundraisers to support Hillary Clinton in her bid to become the first female American president, let it be known through his attorneys that he intended to sue the Times. Weinstein’s accusers must have collectively held their breath.

But then Act II of the Weinstein Scandal began October 10 when Ronan Farrow, estranged son of Woody Allen, published in the New Yorker his own, very detailed expose of Weinstein’s behavior.

“I believe my sister,” Farrow wrote in the Hollywood Reporter  in 2016,  and seethed over the way the mainstream media, in cahoots with Hollywood, had tried to erase Dylan’s story since it emerged in the 1990s. Ronan Farrow was unhappy, too, at the way in which Weinstein and Miramax came to his father’s rescue.

“Shunned by Hollywood means nothing to Miramax,” Weinstein declared at the time. “We’re talking about a comic genius.” Weinstein went on to produce Allen’s “Mighty Aphrodite,” and to chase one of its stars, Mira Sorvino, around her hotel room at that year’s Toronto International Film Festival.

As of today, over 40 women have come forward to accuse Weinstein of varying degrees of sexual coercion, bullying, or assault. The women include such other megastars as Gwyneth Paltrow and Angelina Jolie and women who dropped out of the film industry altogether.

Although the women’s stories range from uneasiness at being called to his hotel room to alleged memories of violent rape, they all confirm that Weinstein used his reputation as a maker and breaker of Hollywood careers to attract women to what they thought were business meetings and to bully them for sex.

According to spokeswoman Sallie Hofmeister — whose job title reminds me that the complicity of female assistants in the producer’s treatment of actresses is an atrocious story in itself — Weinstein has “unequivocally denied” any allegations of “non-consensual sex.” He has also apparently fled to Europe for “treatment” — which reminds me of the European flight of another Hollywood figure associated with sexual violence, Roman Polanski.

Like Polanski, Weinstein has been hailed as a Hollywood genius. According to Ronan Farrow, Weinstein is one of the people most thanked in Oscar acceptance speeches — ranked between Steven Spielberg and God. Feminist heroine Meryl Streep once called Weinstein “God,” perhaps an indication of her real priorities.

For the question must be asked: in a community that prides itself on its left-wing, feminist credentials, on its support of Planned Parenthood, on its anti-Trumpism, why has the film industry tolerated — and perpetuated — sexual harassment, sexual coercion, and sexual assault in its community for so long? In last week’s Time magazine, Sorvino wrote about Hollywood —  and America — as if both were stuck in the 18th century:

It is time for the culture to shift — the age-old tradition of the monied and powerful imposing themselves sexually on the vulnerable and the weak. The Droit du Seigneur must end. And it must end now. This is not a partisan issue. It is not relegated to Hollywood, or red or blue states. Almost every woman I know has some harrowing tale of harassment or sexual assault, and almost every one of them has not gone public for a variety of reasons, including shame and fear.

And speaking of anti-Trumpism, actress Jessica Chastain has pointed out the obvious: that it was highly hypocritical for women in Hollywood to don pink “pussy hats” and complain about Trump while keeping silent about Hollywood’s workplace violence.

“We rally against the presidential candidate who slants a narrative of his (alleged) sexual assault as mere locker room talk,” said Chastain, “but at the same time we ignore the stories and warnings of sexual predators in our offices.”

Quentin Tarantino, some of whose violent but also very successful films were produced by Weinstein, has apologized for knowing about Weinstein’s behavior but continuing to work with him. Tarantino first heard about it  in 1995 from his then-girlfriend, Sorvino, but put it down to infatuation. Then, after hearing other stories, he “chalked it up to a ‘50s-’60s era image of a boss chasing a secretary around the desk. As if that’s OK. That’s the egg on my face right now.”

Quite. But here’s a thought: Maybe we have been seeing women exploited in Hollywood for years with our own eyes. How many of the topless or naked women we’ve seen on screen really wanted to be seen that way? Really wanted to be seen naked by millions? To be seen miming sexual ecstasy? To be seen pretending to be raped? I wonder how many actors and actresses secretly wish for the return of the Hays Code?

Harvey Weinstein produced “Shakespeare in Love,” a vastly popular film that came out in 1998.  It starred Gwyneth Paltrow, upon whom Weinstein had allegedly made unwelcome advances and whom he allegedly frightened into silence. The film won eight Oscars, thanks in part to Weinstein’s genius for Oscar lobbying. But the scenes I remember best are Paltrow being stripped of her clothes and miming losing her virginity to co-star Joseph Fiennes.