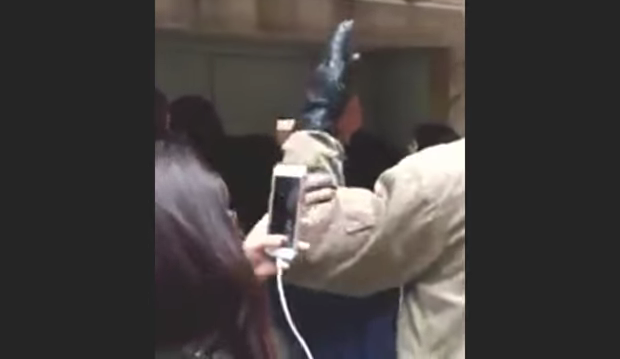 January 24, 2017 (LifeSiteNews) — All I can say is, thank God the “progressives” lost this election! Because they are out of control (cut to the 2:10 mark in Madonna’s vulgar and extremist women’s march speech HERE). Below is a YouTube video shot by a profane North Carolina revolutionary socialist named Udai Basavaraj.

On a visit to DC for the inauguration (and leftist feminist march) weekend, Basavaraj apparently led a harassing protest against former North Carolina Gov. Pat McCrory–yelling “Shame on you, shame on you!” etc., at the recently defeated Republican because he signed the HB2 “bathroom” bill into law.

The cowardly ringleader (his face not shown) yells out at McCrory, calling him a “bigot and an [a**hole]!” Then, as reported below, “just after the one minute mark [and with McCrory and two women backed into a locked door], he says, “We’ve got you now.” Watch the creepy three-and-a-half minute video, then pass this story on.

HB2 requires that people use the restroom matching their biological sex. I suppose in the minds of these ideological bullies, supporting such a bill makes one a monster. Watch the video here (WARNING: Offensive language and themes):

Thankfully, there are still many patriots in this country like North Carolina State Senator Dan Bishop (R), who is as outraged as we at Americans for Truth About Homosexuality are over these hateful fanatics. Sen. Bishop wants to do something to protect people like McCrory, and he is disgusted with the neutral, innocuous way in which the Charlotte Observer newspaper reported this outrageous episode. I will add that homosexual activist publications like LGBTQNation seem to have no problem with it.

Hmmm. Can you imagine the media outrage if a screaming crowd of “conservatives” cornered a few homosexuals into a closed alley?

As Sen. Bishop writes, “One also wonders if the mob fell upon the former governor by coincidence or if they stalked him.” Note the young woman scurrying uncomfortably (with her face away from the camera) from the approaching gaggle of screaming protesters. She is obviously scared. The lead LGBTQ protester-bully (Basavaraj?) screaming “shame on you!” clearly has no regard for the fear that he and his “mob” of yelling activists are inducing in her–as they pin their targets against a locked door.

After all, in the leftist scheme of things, the end–in this case, humiliating and intimidating Christian “haters” and “transphobes”–justifies the means. And “bigotry” knows no gender, right?

Think about this: is the modern “LGBTQ” activist phenomenon a “New Civil Rights Movement”–or rather a spoiled Sin Movement so steeped in its own self-rationalizing ideology and warped self-righteousness that it is willing even to scare a young woman if that’s what it takes to achieve its unattainable goal of “equality”?

Of course, many homosexuals would share my outrage at this despicable conduct. This is an extreme case, but all homosexual activists are compelled to sacrifice some social good, or some transcendent truth–e.g., about the essence of marriage itself–to serve their aberrant, self-justifying worldview. The more power they achieve, the more the War on Normal (which is actually a futile fight against our Creator) is ratcheted up. And the more innocent casualties mount.

Although it must not undermine the First Amendment, we hope Sen. Bishop succeeds in his bid to protect public servants from overt harassment. Stay tuned.