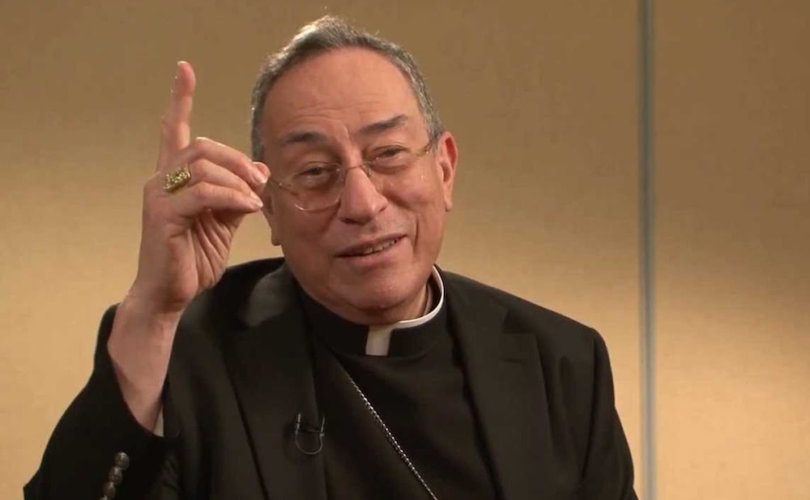 ROME, July 23, 2018 (LifeSiteNews) – Hoping it would pass under the radar undetected, the Vatican quietly announced the resignation of a young bishop on Friday.

Using a tactic equivalent to Washington, D.C.’s famous “Friday afternoon document dump” – where bad news is reported by government officials when it is least likely to catch the attention of the press and the American public – the Vatican noted the resignation of Honduran Auxiliary Bishop Juan José Pineda Fasquelle in its weekly report of “Resignations and Appointments,” as if it were routine news.

However, this news is anything but routine.

The circumstances leading up to Pineda’s resignation are significant not only because they involve allegations of sexual abuse and financial misconduct but because of his close collaborative relationship with his superior, Cardinal Oscar Andrés Rodriguez Maradiaga, an influential member of Pope Francis’ inner circle, the C9 group of cardinals.

These circumstances beg the question: What exactly did Cardinal Maradiaga know and when did he know it?

The Register obtained testimonials from two former seminarians accusing Bishop Pineda of sexual abuse. The testimonials were among approximately 50 statements obtained from individuals, including diocesan staff and priests, during an investigation called at the request of Pope Francis in May 2017.

The head of the investigation, retired Argentine Bishop Alcides Jorge Pedro Casaretto, was reportedly “appalled and shocked” by the testimonies he received.

Evidently, Pineda’s sexual shenanigans with seminarians became so notorious one archdiocesan official told the Register that after it became known that Bishop Pineda had slept with seminarians, the seminary’s former rector and his team of formators kept the bishop away from the seminary and prevented him from teaching in 2016.

Pineda was known to have a “string of intimate male friends” on whom he lavished gifts, going so far as to give his first assistant, a Mexican named Erick Cravioto Fajardo, a downtown apartment.

But for years, Cravioto lived in a room adjacent to the Cardinal’s quarters at the archbishop’s residence, Villa Iris, where Bishop Pineda also had living quarters.

“Cravioto’s room was ‘right next to the cardinal,’ who knew ‘perfectly well that Pineda spent hours and hours with him and never said anything, never did anything,’” according to the Register report.

The cardinal reportedly dismissed Bishop Pineda’s relationship with Cravioto and “made excuses for it all,”  according to the Register’s Honduran source.

Pineda has also been accused of misappropriating $1.3 million from the Honduran government destined for charitable projects in the archdiocese. Reportedly, the funds “completely disappeared.”

The Honduran prelate has also had expensive tastes when it comes to travel. According to documentation obtained by the National Catholic Register, between last June and the beginning of this year, Pineda had personally racked up more than $18,000 in personal air fares, including two separate first-class trips to Madrid in November to meet close male friends.

Pineda released a statement Friday saying he had given Pope Francis his resignation “several months ago.”

The Honduran prelate did not comment on the allegations against him, choosing only to say that stepping down would give him “time for prayer, meditation, personal and continuous formation, so that, in due course, I will continue to give to the Church and to you the best of me.”

Everyone deserves a time of “rest, formation and prayer,” he added.

Cardinal Maradiaga: 'Siding with Pineda and not the truth'

Despite the findings of the papal investigation, no action has been taken against Pineda until the announcement that Pope Francis had accepted his resignation.

Yet former seminarians, priests, and other locals in Honduras continue to live in fear of reprisals for coming forth to give their testimony.

An informed source told the Register that Cardinal Maradiaga was “aware of everything but always sided with Pineda and not the truth,” and that the institutions meant to deal with these cases, such as the apostolic nunciature, “were overridden.”

Author Philip F. Lawler, writing in his 2010 book The Faithful Departed, asked, “Why do bishops fail to take action, to discipline the abusers and protect the innocent?” and “Why do they defend the indefensible?”

Lawler also called attention to the way some bishops seemingly just disappear from sight overnight, not unlike Pineda today. Canon 402-2 “allows the Vatican to accept a bishop’s resignation without acknowledging the scandal that provoked it,” so that he can leave office in good standing.

But in the age of Cardinal Theodore McCarrick, this isn’t good enough. Cardinal Maradiaga needs to either explain what he knew about Pineda and why he tolerated his behavior, or alternatively explain how a Cardinal who advises the Pope could be so blind to what was going on for years right under his nose.