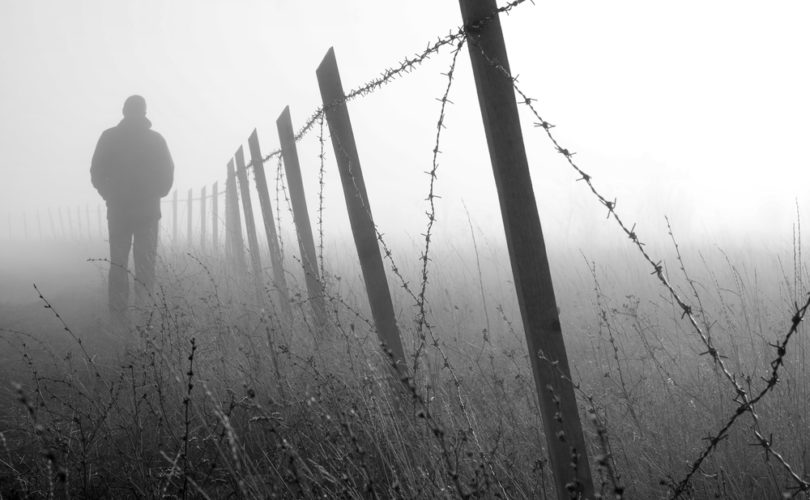 I wish to assert several things about our hatred of boundaries. It ultimately must be hatred of kinds of things, an impatience with nature, including our own.Shutterstock

As I write these words, the government of my country, colluding with certain business interests and employing cold Machiavellian calculation, has precipitated a humanitarian crisis on our southern border, treating law as if it were dispensable at a whim, and not really considering the common good or the good of individual human beings.

And judges in two other states, many orbits out of their juridical authority, have struck down statutes stipulating that two and two make four, that a dog is not a cat, that fish swim in water, and that it takes a man and a woman to make a marriage, on the grounds that the statutes were irrational.

And the president of my country, for two years, has been altering the new health-care law by fiat, not only delaying implementation of its rules more numerous than the sands on the seashore, but changing their terms and choosing who will have to abide by them. The country does not care, since everyone seems to regard it as “his” law, as if he were a king, and not merely the executive of the people's representatives, whose law it is, for better or for worse.

What all of these things have in common is a hatred of boundaries: a refusal to honor what makes a thing the kind of thing it is, and therefore a refusal to observe the limits of one's own business, whether moral or political.

And in a thousand clinics and hospitals from San Diego to Saint John's, a needle injecting salt, or a scalpel to cut, or scissors to snip, or a vacuum tube to suck out, is invading the warm haven of the womb, to end the life of a child whose parents would not honor the holiness of marriage or the inviolable right of the innocent to live.

And in a little old French village on the Atlantic coast, the caretakers of a fortress-museum are preparing for a big celebration in two weeks, to honor men who sow the seed of human life in the place of evacuation and disease, or who cruise bars and secluded rest stops for the anonymous fling.

And the solons of death-spiraling California have ordered schools to allow boys to use locker rooms with girls if the boys in question say that they are girls. And scientists, for what boon to mankind we are not to know, have been welding human genes with those of pigs, though no pig as yet has been found to say he is human. And Catholic school administrators in Ontario have proclaimed themselves “co-parents” of children whom they can neither number nor name, conferring upon themselves the right to overrule parents who have not learned to like the taste of the progressive pie a la mode.

What all of these things have in common is a hatred of boundaries: a refusal to honor what makes a thing the kind of thing it is, and therefore a refusal to observe the limits of one's own business, whether moral or political.

When God made the world, He made things, with their characteristic boundaries. That is what the sacred author of Job insists upon. God said to Job, “Where were you when I laid the foundations of the earth?” And, “Who shut up the sea within doors, when it broke forth, as if it had issued out of the womb,” and said, “to here shall you come, but no farther, and here shall your proud waves be stayed?”

Likewise in Genesis we see that God divides and distinguishes when He creates, not only when He divides the light from the darkness, and sets the firmament between heaven and earth, and orders the waters into one place so that the dry land may appear. He does so when He makes every living thing after its kind, a crucial phrase for understanding the whole. The kinds are so by means of boundaries: an apple tree brings forth apple blossoms after its kind; birds flock together and mate after their kinds. Man too is made after his kind, male and female; and it is characteristic of man to be made by God, for God: “So God created man in his own image, in the image of God he created him; male and female he created them.”

That explains the single small but necessary “boundary” which God sets for Adam and Eve: the prohibition against breaching the prerogative of God. They must not eat of the fruit of a single tree, nor even touch the tree, lest they die. It is nothing more, and nothing less, than to acknowledge that they are made in the image of God, which is also to say that they are not God.

We know the rest of the story. The first breacher of order, the first transgressor, the first pretender to be what he is not, the first intruder into the integrity of a fellow living being, the serpent-puppeting devil, the “liar and murderer from the beginning,” persuades Adam and Eve that they can be more than they are by being other than what they are. They eat, and to their dismay find themselves all the more painfully aware of their most obvious and vulnerable boundary. They hide their naked skin from one another, and their stripped consciences from God.

I wish to assert several things about our hatred of boundaries. It ultimately must be hatred of kinds of things, an impatience with nature, including our own. It must therefore riddle us with holes, as judges, teachers, executives, doctors, legislators, the promoters of disordered and boundless libido, and even parents will not honor what is proper to another – the innocence of children, the life of a baby in the womb, the integrity of marriage, the authority of the mother and father over the school, the prescriptive rights of common people in their folkways. But they cannot do so without perforating themselves likewise. That kind of all-lying and all-attacking pride is a universal solvent; nothing on earth can contain it. It devours the hands that spill it.

What does it leave us with? The twin evils of chaos and tyranny – as I'll show in my next essay.