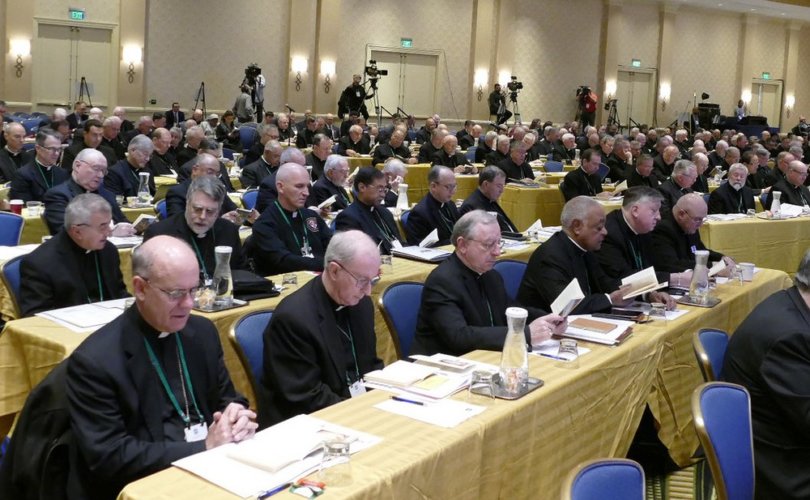 November 19, 2018 (LifeSiteNews) – I was with the bishops in Baltimore for their annual fall assembly. Paralyzing fear was palpable among the prelates. The air was thick with it, permeating the general sessions, lobby, and corridors of the hotel where they met, ate, and slept.

They have proven it was necessary for Archbishop Carlo Maria Viganò to have exhorted them to confront sex abuse as “courageous shepherds” rather than “frightened sheep.”

What are they afraid of? Just about everything.

Our bishops fear the laity

Members of the United States Catholic Conference of Bishops (USCCB) are scared to death of the people back home who hold them accountable for the existence and perpetuation of the clergy sexual abuse crisis. Along with the general public, lay people are incredulous that now-disgraced Archbishop Theodore McCarrick could abuse boys and seminarians for decades while ascending to the cardinalate.

If his brother bishops knew and did nothing, that’s a horrible scandal. And if they didn’t know, it’s a scandal of equal proportions because it reveals these men have no brotherhood at all.

Our bishops fear their own priests

USCCB members are scared of the priests in their own dioceses who now face this crisis on their own. They’ve had to endure painful “listening sessions” with angry and dispirited members of their parishes, some of whom risk losing their faith. In a sense, these priests have been hung out to dry.

These priests, mostly undeservedly, have also come under suspicion by parishioners and the general public who wonder if there might not be more priest-predators hidden under their noses.

Their priests needed them to make headway on dealing with the crisis in order to dispel the widely-shared notion that it continues unabated, out of control. Yet the bishops had to return to their dioceses with the news that they basically accomplished nothing while in Baltimore.

Our bishops fear the media

During this past week in Baltimore, access to our U.S. prelates was severely limited. Journalists were warned not to approach bishops one-on-one with our questions at any point during the five days we shared a hotel, restaurants, and elevators with them. Contact could only be made by submitting electronic request forms, most of which were ignored.

We were limited to, “Nice to see you, Your Excellency” as we rode elevators together in the luxurious waterfront Marriott Inner Harbor Hotel.

All that said, here are their three biggest fears.

The bishops fear offending the Holy See. Despite whatever ferver was ignited in many after being informed that the Vatican had pulled the carpet out from under their plans to deal with the sex abuse crisis, the bishops could not even agree on a sentence or two of “encouragement” to Pope Francis, asking him to release the Vatican’s documentation on McCarrick.

The discussion revealed not only disarray and a directionless, wandering in the desert as the Israelites once did. It revealed a lack of manliness.

Very little courage was on display last week, but when it was, it was magnificent. Five courageous prelates stood out: Bishop Stickland of the diocese of Tyler, Texas; Bishop Cozzens of Saint Paul and Minneapolis; Bishop Daly of Spokane, Washington; Bishop McKnight of Jefferson City, Missouri; and Bishop Paprocki of Springfield, Illinois.

And the reason they stood out is because they acted like men. Catholic men. Vicars of Christ.

The bishops were also paralyzed when it came to discussing homosexuality. Most can’t even utter the “h word,” yet it remained the elephant in the room. Only one – Archbishop Cordileone of San Francisco – dared to use the term on the second day of their gathering, but he then concluded his remarks by obscuring the fact that homosexuality stands at the heart of the current mess the Church now faces.

Their omission states volumes about the depth of their fear of the gay lobby within the Catholic Church. By not speaking directly about homosexual priests and prelates who, as grand jury reports and independent studies have revealed, have been responsible for 80 percent of clergy sexual predation over the decades, they give cover to forces within the Church seeking to promote homosexuality as fully normal.

Their fear raises the question: “Why?”

Why do they fear unchaste gays within the ranks of clergy more than they fear abandoning Church teaching and their roles as shepherds?

In the days before they gathered in Baltimore, the USCCB contacted the Baltimore Police Department expressing their fear of the protesters who planned to hold a rally on a pier opposite the hotel.

The Baltimore Police Department was told that the bishops' conference was considering changing venues at the last minute.

“Officials at the bishops’ conference informed the Baltimore Police that attendees at the rally were going to disrupt the bishops meeting and ‘throw blood on the walls,’” according to a report by Church Militant.

“The effort by the bishops’ representatives to try and paint faithful Catholics as a physical threat, planning to storm their meeting, throw blood on the walls and Heaven knows what else proves the point of how completely out of touch the U.S. bishops are,” the report continued.

The Silence Stops Now rally was held in a tent-like structure on a pier opposite the bishops’ hotel. A little pedestrian bridge over the water joined the hotel to the site of the rally.

But the bishops feared crossing that bridge to the laity. They were more comfortable remaining detached.

In the end, only one bishop cared enough to leave the hotel to greet the faithful, hear their concerns, and pray with them.

“My flock, back in Tyler, said ‘go and pray with those people,’” explained Bishop Strickland of Tyler, Texas, who spoke at length and then gave his blessing to participants of the Silence Stops Now rally as they filed into the MECU Pavilion.

Strickland’s trek across the bridge provides important symbolism, and not only because he was the only prelate who sought to be connected with laity who had traveled from all over the country to communicate with their bishops.

His action contrasts with other bishops and cardinals who have joined with Father James Martin, SJ in his effort to “Build a Bridge” with the LGBT world, effectively dislodging Church magisterium, aggressively and increasingly brazenly seeking to normalize homosexuality within the Church.

Bishops fear treading bridges connecting them with their faithful block while happily building bridges to sodom.

One more bishop, Richard Stika of Knoxville, Tennessee, had the courage to emerge from the hotel to talk to rally goers after the event. According to the National Catholic Register:

“I believe Satan is behind all of this,” he said. Bishop Stika said Christ gives the Eucharist to feed the faith of his people – and to cut people off from the Eucharist and kill their faith, he is attacking the priesthood.

That the smell of fear was in the air among the bishops is certain. But might this also be the noxious smoke of satan filling our nostrils as it fills the Church?