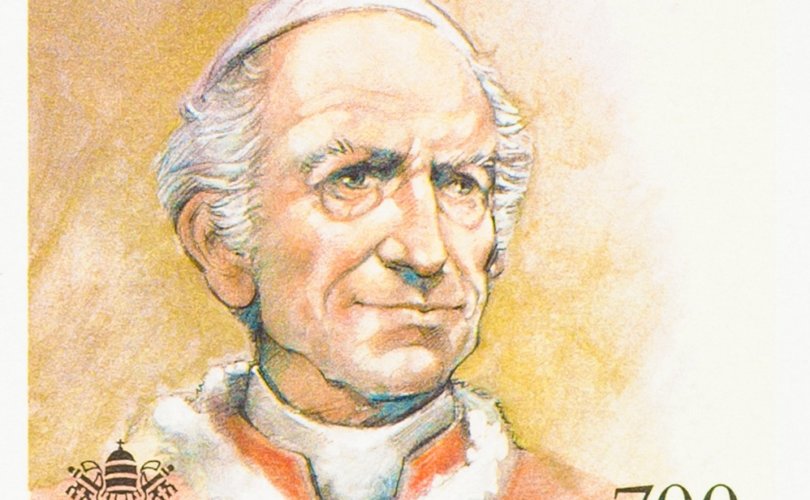 May 28, 2019 (LifeSiteNews) — One of the many benefits of studying Church history is that, in times of lackluster leadership or mounting persecution, it can provide us with inspiring models and reasons for hope.

Prior to Leo XIII (Gioacchino Vincenzo Raffaele Luigi Pecci, 1810–1903; reigned 1878–1903), the Catholic Church in the nineteenth century was under siege and on the defensive. In many ways, she was marginalized and held in contempt; the “enlightened” liberals who ran the show in Europe (as they do today) belittled her “medieval” words and ways and predicted her disappearance as a matter of course. Her supreme leader was left little choice, it seemed, but to hurl protests and anathemas at a heedless world. Secularists would simply not have thought it possible that the Church would rally and boldly respond to the challenges of the day, gaining the moral high ground where she had lost physical territory or political support.

Leo XIII’s landmark interventions on political and economic issues created a fully consistent and well articulated body of social doctrine, tying together loose strands of Scripture, Church Fathers and Doctors, and earlier interventions of the Magisterium into a coherent social ethics. Considering that he wrote nearly 100 encyclicals addressing a wide variety of subjects and audiences, it may seem a daunting task to recommend a modest number of “must-reads.” Fortunately, it is not difficult to do, because Leo XIII himself told us near the end of his pontificate, in the retrospective letter Annum Ingressi Sumus of 1902, which of the social encyclicals he considered the most important.

There are five encyclicals that, taken together, make up a “crash course” in the fundamentals of Catholic Social Teaching (CST): Diuturnum Illud of 1881, on the origin of civil authority; Immortale Dei of 1885, on the Christian constitution of States; Libertas Praestantissimum of 1888, on true and false freedom; Sapientiae Christianae of 1890, on the duties of Christian citizens toward their states; and Rerum Novarum of 1891, on labor and capital — i.e., the rights and duties of owners and workers. These documents and others akin to them are contained in A Reader in Catholic Social Teaching, which I edited for Cluny Media, and which has become the basis for many book clubs and parish classes. The texts contained in this volume have been purged of their typos (plentiful in online sources) and, in some cases, corrected against the Latin originals.

In Diuturnum Illud, Leo XIII demonstrates why God is and must be the source of all political societies as well as of any authority their rulers wield. Notably, the people who may have elected the rulers are not the source of their powers, nor are those rulers beholden to the people so much as they are to Almighty God, who will judge them all the more severely for the weight of their responsibility. Correcting numerous Enlightenment-derived errors that modern Westerners typically make about the origin and purpose of political power, this encyclical also presents an excellent account of what is called “civil disobedience” but is, in reality, consistent obedience to God’s higher law.

In Immortale Dei, Leo XIII unfolds in some detail the ideal Christian constitution of a state and why it is impossible to maintain that states have no obligations to God or the Church and no obligation to form their citizens in moral virtue. As before, Leo argues against “the principles and foundation of a new conception of law.” He has in mind the “social contract” theory — that, contradicting both divine law and natural law, undermines the stability of the state, which depends on the successful profession of religion within it, the fulfilment of each citizen’s primary duty to God. This encyclical also contains one of the best accounts ever penned of the likenesses and differences between civil or secular society and the society that is the Catholic Church; it depicts with exceptional clarity their proper spheres of authority as well as how they may overlap or come into conflict.

Closely connected to the foregoing is Libertas Praestantissimum, which remains the most comprehensive and acute analysis of the meaning of human freedom that has yet come to us from the Chair of St. Peter. This explains why it has also been among the documents cited most frequently by all of Leo’s successors. This encyclical speaks of the human will’s dependency on law, truth, and grace; how freedom when abused leads to slavery; how the eternal law, the natural law, and human law are interconnected; how modern political liberalism (meaning the doctrine of eighteenth-century philosophers like John Locke) “opens a way to universal corruption”; why the total separation of Church and State is a “manifest absurdity,” and yet why toleration of false religions may be permissible when greater evils can be averted thereby.

Inserting another key component, Leo XIII issued Sapientiae Christianae on the rights and responsibilities of Christians as citizens in modern societies. As we might have expected, the pope speaks with wisdom and prudence about a host of questions that face the Catholic citizen: What is true patriotism or national piety, and how is it related to devotion to the Church? What is the mission of the laity and the Catholic family in the secular world, what are the rules that must govern a Catholic’s political choices, and what kind of behavior of Christians in the public sphere is “base and insulting to God”? How are Church and State meant by divine Providence to work together such that citizens may achieve natural and supernatural perfection? In passing, Leo takes up a number of other questions such as what a layman’s attitude should be toward erring bishops and why Christians who fail to live out their faith are guilty of a sin worse than that of the Jewish people in rejecting their Messiah. He spells out, with greater clarity than proponents of civil rights movements were able to do later on, the whys and wherefores of following one’s conscience over and against a government’s immoral dictates.

Rerum Novarum is Leo XIII’s most famous encyclical. Regrettably, many people have tried to find in it a comprehensive summary of Catholic social doctrine — something it surely neither contains nor sets out to offer. Pope Leo took pains to note, in the document itself, that he had written other encyclicals (such as the ones mentioned above) that must be read in order to supply the proper context for its predominantly economic considerations. These considerations include why socialism is “emphatically unjust” and guaranteed to make things worse rather than better; how the institution of private property, or possession of one’s own goods, functions favorably for individual, family, and state; how the family is, in some sense, prior to the state, and yet why the state’s role in promoting the common good of a larger group is most useful and necessary; and why the state must protect and enforce the rights and duties of various classes. The employer’s duties as well as the worker’s are clearly spelled out; the “chief and most excellent rule for the right use of money” is laid down (doesn’t that alone whet your appetite to read this document?); the influential concept of the “just wage” and the “family wage” are defined and defended against objections; and workingmen’s unions or “guilds,” along with the “right of association,” are strenuously defended. Whenever I go back to this encyclical, I am amazed to see just how the mighty economic struggles and sufferings of the twentieth century (and indeed of the twenty-first) are anticipated therein, their causes exhibited, their solutions proposed.

In the magisterium of Leo XIII we find a systematic plan for engaging the modern world — a plan he pursued energetically and without deviation for a quarter of a century. While Pope Leo was deeply critical of and pessimistic about the direction the Western world was going in and knew that its secular philosophies were mortal poison, he was animated above all by an intensely positive vision of what Christ and the Church can do for modern men, who need to be saved from the idols their own hands have fashioned.