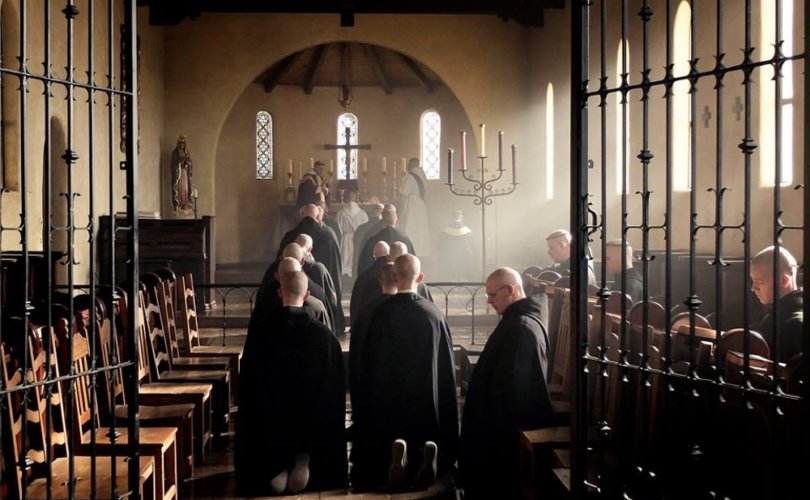 November 5, 2018 (LifeSiteNews) – Yesterday I offered a (brief!) history of Gregorian chant in the liturgy of the Catholic Church.

Today, I will discuss what makes chant distinctive among musical forms, and then recommend my favorite chant recordings. If we can identify chant’s special qualities, it will be easier to see why it naturally grew up together with the liturgy and why the Church has recommended it so highly over the centuries, down to our own times.

1. Primacy of the word. Chant is music in service of God’s word. Most chants are based on God’s own words in Scripture, sung in musical phrases that draw out the words’ depth of meaning. Chant is an exegesis of the text: the melody and rhythm is not casually or incidentally related to the text, but unpacks and savors its truth—emphasizing this or that aspect of it, lingering over this phrase, probing that one.

2. Free rhythm. On account of the foregoing, chant is “ametrical” or “non-metrical”—the only music of its kind in the Western tradition. Its musical phrases follow the natural rhythm of Scripture, which is not written in a poetic meter. Because chant is not confined to a predetermined grid of beats, such as duple or triple time (think: march or waltz) but conforms to the syllables of the words, its phrases seem to float, flow along, meander, and soar. It breathes rather than marches ahead; it moves with a wave-like undulation, or like birds circling in the sky. A large part of the “magic” of chant is caused by its unconstrained fluidity and freedom of motion, which seems to break out of the hegemony of earthly time represented by the beat.

3. Unison singing. Because the focus in chant is on the word of God as it gathers us into the one Body of Christ, it is sung in unison—that is, everyone singing the same melody at the same time. The subtle rhythm of chant and the much-admired inventiveness and intricacy of its melodies are, in fact, only possible because of this insistence, at once practical and symbolic, on unison singing. Few things witness more impressively to the unity, antiquity, and universality of the Church than a large congregation chanting the Creed together at Mass, demonstrating in action that the Church is one, holy, catholic, and apostolic.

4. Unaccompanied vocalization. Chant is traditionally sung “a cappella” or without instrumental accompaniment. The sound of the naked human voice raised up to God in prayer is singularly real, sincere, humble, focused—and less vulnerable to the kind of distractions that come with the use of instruments, especially when played virtuosically, rambunctiously, or just plain loudly.

5. Modality. After free rhythm, modality is the next most distinctive characteristic of Gregorian chant. A mode may be defined as a particular sequence of whole steps and half steps, among which there is a dominant (or reciting) tone and a final tone on which the music comes to rest. Taking into account the possibilities afforded by the eight-pitch Western scale, chant coalesced into what may be classified as eight modes. As music developed in the late Renaissance and into the Baroque, two of the modes (in a way; I’m simplifying) gained preeminence and became what we call “major” and “minor” keys. While this development allowed for sophisticated chord sequences and dramatic modulations, it forced melodies into tighter confines, and the variations in feel or mood made possible by the modes were lost—except in chant. Because our ears are so habituated to the major/minor key system (and have been for centuries), Gregorian chants, which employ eight modes that seldom conform to our modern musical expectations, strike us as otherworldly, introspective, haunting, incomplete, “brightly sad.”

6. Anonymity. The vast majority of chants were composed by anonymous monks, cantors, and canons. We will never know their names in this life. What a healthy corrective to the egotism that often comes with artistic creativity and performance! Chant quenches distinctive personality—both in that we do not know its author, and in that we cannot “shine” or stand out in a rock-star way when singing chant in a schola or congregation. It works against the desire for show, encourages a submersion of one’s individuality in Christ, and makes us act and feel as members of the Mystical Body.

7. Emotional moderation. It would be a mistake to say chant is without emotion. The melodies are deeply satisfying to sing and to listen to (when well executed). They plumb the depths of joy and exultation, bitterness and sorrow, yearning and trustful surrender. They express many fine shades of feeling. They can even induce tears in one who is spiritually sensitive. However, the emotions in chant are moderate, gentle, noble, and refined. They induce and conduce to meditation—to the flight of the spirit into God, who is Spirit. The “temperance” of chant takes on a special importance in our times, when so many people live a fast-paced life, busily rushing over the surface of things, excitable and even wearied from too much stimulation. In a way that was undoubtedly not as necessary in the Middle Ages, chant becomes for us a medicinal remedy, a health-giving purgative, a summons to greater interiority, a promoter and guardian of right spiritual hierarchy.

8. Unambiguous sacrality. This is perhaps the most obvious fact, yet its significance is seldom fully appreciated: Gregorian chant arose exclusively for divine worship, and lends itself to no other (profane) use. It is inherently sacred, that is, set apart for God alone. It is the musical equivalent of incense and vestments, which are not used except for worship. Such things are the privileged “honor guard” and “attendants” of Christ, powerfully evoking His presence and effortlessly guiding us into that presence. Chant, says Swain, is “the musical icon of Roman Catholicism.” As such, it contrasts with secular styles of music that, when brought into the church, have an ambiguous signification: are we dealing with our Lord or with the world (or even worldliness)? Are we lowering God to our own level or asking Him to lift us up to share in His divinity?

Now for the recommended chant recordings. Each of these is special in its own way, and all are exemplary in their execution of chant. The subtle differences in the manner of singing the chant show a legitimate variety of interpretations of this ancient art form.

Benedicta (The Monks of Norcia)

By far the best deal for a set of truly excellent recordings is this one. For $23.15 (last I checked), you can get 6 CDs of chant that covers the highlights of the liturgical year. Here is a sample of their sound: