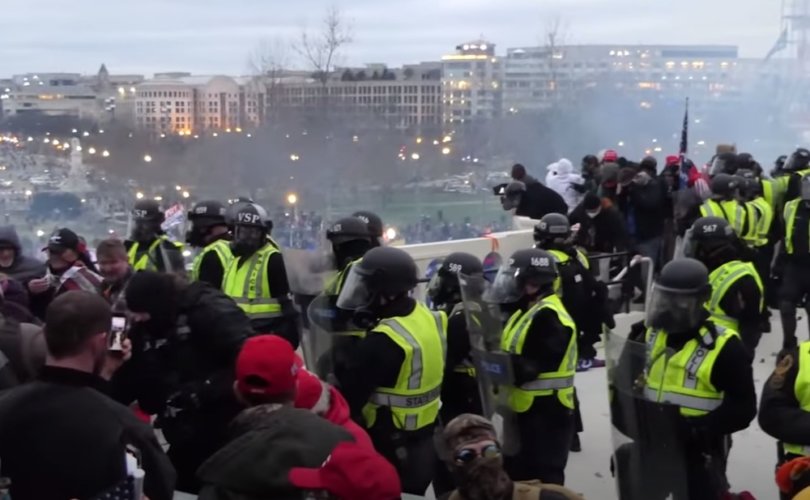 January 7, 2021 (LifeSiteNews) – How should the pro-life movement respond to the strange events that unfolded in Washington, D.C. yesterday? How should Americans and non-Americans feel about what happened inside and outside the U.S. Capitol, and what does it mean for American civil discourse moving forward?

First, to state the obvious: LifeSiteNews – and the pro-life movement, I’ll add – has never and will never support senseless violence. Abortion is a terrible act of violence against innocent unborn children, and our opposition to that unjust killing is what motivates us to peacefully fight for the complete abolition of abortion.

There is a lot we don’t know about what transpired yesterday, and we will likely find out more in the coming days and weeks. Everyone should have an open mind and be ready to reconsider his opinions in light of new facts. The full truth of what happened may very well make a small group of Trump supporters look bad – but it also may very well make leftists, Antifa, and the Capitol police look far worse. We don’t know and there is no possible way to know right now exactly what happened. And why did Capitol police (or Secret Service?) shoot and kill – apparently in cold blood – a 35-year-old Air Force veteran who is now being vilified by mainstream media, as if she somehow deserved to be killed because she believed in “far-right conspiracy theories”?

Context about the U.S. Capitol

Some context: the U.S. Capitol is generally open to visitors during business hours. Anyone who has ever participated in a lobby day or been a tourist in Washington, D.C. knows this. People wander into the U.S. Capitol and its Senate and House office buildings all the time. There are separate staff entrances so the people who work there don’t have to wait in line with everyone else. Visitors are required to go through security, which is a bit like a pre-9/11 airport (metal detectors and your bag gets X-rayed).

You can be asked to leave or arrested if you block the hallways. People get arrested inside the Capitol all the time, usually as part of peaceful, planned civil disobedience protests. Obviously, the coronavirus has changed things, but during the ancient “normal times” the buildings were quite open to the public. (As a side note, pro-lifers who have protested outside the U.S. Supreme Court on abortion-related decision days are accustomed to going through the minimal security in the National Archives, which is next to the Court, to use the bathroom.)

The House and Senate chambers are not open to the public or even most Capitol Hill staffers. Suffice to say shirtless people inside the legislative chambers are not a normal sight, nor is it normal for visitors to root through congressmen’s desks.

It seems the Trump supporters who entered the Capitol yesterday didn’t go through security, possibly because Capitol police simply stood down. In at least one instance the Capitol police actually opened a barricade for protestors to stream through; it’s unclear why.

From the footage that I’ve seen, it seems that the biggest difference between the majority of the protestors who entered and wandered around the Capitol and any other visitors on any other pre-coronavirus day is that the former did not go through security, thus likely making authorities (understandably) nervous.

Windows were broken, certain parts of Congress were vandalized. I’ve not seen any pro-life leaders condoning that and obviously LifeSite does not either.

People scaled the walls and scaffolding. Some who were there have told LifeSite journalists that this was dramatic and unnecessary because the doors were literally open for people to stream through.

I’ve attended many Marches for Life, a number of them as a LifeSite journalist, and also reported on the 2017 pro-abortion Women’s March and the 2017 inauguration of President Trump. (I was not in D.C. yesterday, though.)

The Women’s March literally featured a speaker, the singer Madonna, who said she’d “thought an awful lot” about blowing up the White House. It also had its fair share of people (mostly peacefully) “storming” or rushing buildings.

When I was reporting on the ground for LifeSite at Trump’s 2017 inauguration, there were police in full riot gear. Anti-Trump protestors lit cars on fire, smashed Starbucks windows, and generally trashed the city. A colleague and I were given tickets to an Inaugural Ball. We had to walk about seven blocks of closed roads (any inauguration is a crazy time to be in D.C.) that night, past small groups of Occupy Wall Street types who were beating drums and burning American flags. My soul felt very uneasy. My colleague and I were in ballgowns and very clearly going to a fancy event. Several leftist agitators literally hissed at us and made rude comments. Thankfully, that was all we experienced.

Ben Domenech of The Federalist published a fantastic analysis of yesterday’s events in his newsletter The Transom.

“What happened yesterday didn’t depress me the way it seemed to depress other people,” he wrote. “Maybe that’s because I don’t view the institution of the Capitol as sacred the way others do. As a former staffer, I’ve known too many stories about the nooks and crannies where Ted Kennedy did stuff to get too verklempt about it. And the invaders stayed inside the velvet ropes in Statuary Hall, which I actually care about. But it’s disturbing for a lot of reasons, two in particular that stick out.”

The first is a comment from an apolitical friend who wandered into the room where the roiling crowd was on the screen in the early afternoon yesterday: “Is that Black Lives Matter?” No, it’s not – but also, it is. An apolitical viewer of the summer of 2020 would learn one distinct lesson: if you want to be heard, if you want to be listened to, you need to go into the streets, make a ruckus, set things on fire, and tear down icons of America. This disrespect will be welcomed, hailed, and supported if your cause is just and your motives are righteous.

Just about everyone who showed up on Capitol Hill yesterday believed that about why they were there. The only difference between the horned man standing in the Senate chair and the smiling man hauling the Speaker’s podium out the door and the fellow who attempted to tear down Andrew Jackson’s statue or the criminal who set fire to Saint John’s church is a matter of jersey color.

Domenech’s second reason is that “The iconoclasm of the right is a real development and it is here to stay. You’ll wish for the old man in the tricorn hat waving a Cato Constitution when you see the new right blasting statues with graffiti.”

I’m not sure if I agree with his second reason, but I most certainly agree with this:

The breach yesterday has been long in the making. Even as a young staffer I was shocked at how unsecure the Capitol was – there are numerous gaps in their security that you will easily witness if you spend any time there. It’s only the intimidating columns, the confusion about which door you can use, the institutions and norms that keep people at bay. And those, alas, are now gone. They are dead, they are in the ground, and they are not coming back.

What will happen next is obvious: A total crushing anti-Free Speech effort that treats Trump-supporting groups like Branch Davidians. An effort to restore the fundamentally unserious neocons as the voice of reason in the room. A hardening of the bounds of the People’s House to keep people away from politicians. A use of any levers of government power – including audits, regulation, and lawfare – to harass conservatives now categorized as seditionists and terrorists by the incoming president who falsely claims to want to unite the country. And above all, a doubling down on all the policies and efforts put in place to crush exactly the type of people who showed up at the Capitol yesterday in a foolish, desperate attempt to make themselves heard.

I hope Domenech publishes the full text of his newsletter, which one usually must pay to read, at The Federalist or somewhere else because his analysis is so spot-on that I think the world needs to read it.

Our country has reached a dark moment and crossed into uncharted waters. Things are only going to get darker, especially now that a Biden regime is just weeks away. In six months, how will we look back on the events of January 6? What will we think of them in a year? It’s impossible to know, really. We’re still piecing together the facts of what happened, who did what and why, and what bad actors were involved.

Where do we go from here?

The best course of action for freedom-loving pro-lifers, I believe, is simply this:

a.) Pray for America and strive for sanctity in our daily lives.

b.) Love your family, and love your neighbors.

c.) Speak truth to power, no matter the cost, gathering inspiration from people like Aleksandr Solzhenitsyn and Bishop Athanasius Schneider.

d.) Prepare for darkness and more persecution knowing however that in the end Christ will be victorious.

e.) Continue to condemn senseless political violence (and acknowledge it is far from concentrated, normal, or prevalent on the American “right,” no matter what mainstream media tell us), voter fraud, and tyranny in all of its many forms.

LifeSite will continue to bring our readers fearless reporting on issues of life, faith, family, and freedom. Please pray for all of our journalists and staff, that we may prudently and accurately report what is happening in America and around the world.

LifeSite VP: I was in DC today. Here’s what I saw, and what I think about it.

Yesterday was historic – and not in a good way