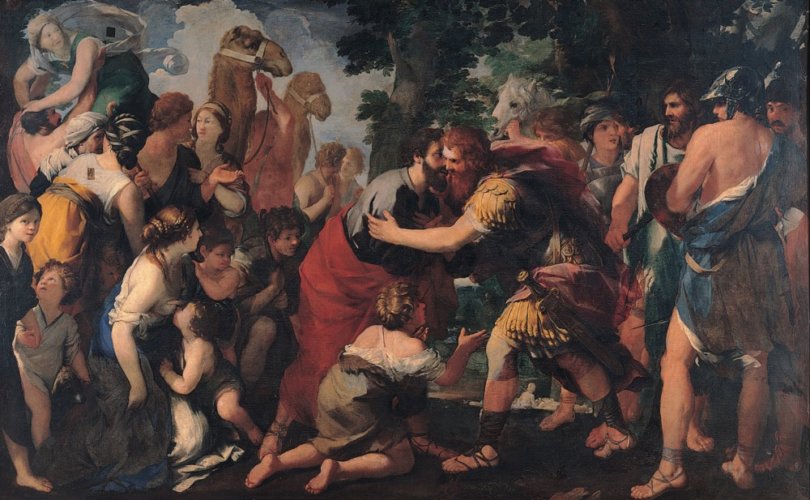 May 8, 2019 (LifeSiteNews) — St. Louis-Marie Grignion de Montfort, well known for his masterpiece True Devotion to Mary, offers us much food for thought in his biblical allegories. In particular, he pays close attention to a famous episode in the story of Isaac and Esau, giving it a Mariological reading. Here is the passage from chapter 25 of the Book of Genesis:

Isaac was forty years old when he took to wife Rebekah, the daughter of Bethuel the Aramean of Paddan-aram, the sister of Laban the Aramean. And Isaac prayed to the Lord for his wife, because she was barren; and the Lord granted his prayer, and Rebekah his wife conceived. The children struggled together within her; and she said, “If it is thus, why do I live?” So she went to inquire of the Lord. And the Lord said to her, “Two nations are in your womb, and two peoples, born of you, shall be divided; the one shall be stronger than the other, the elder shall serve the younger.” When her days to be delivered were fulfilled, behold, there were twins in her womb. The first came forth red, all his body like a hairy mantle; so they called his name Esau. Afterward his brother came forth, and his hand had taken hold of Esau’s heel; so his name was called Jacob [“He supplants”]. Isaac was sixty years old when she bore them.

When the boys grew up, Esau was a skilful hunter, a man of the field, while Jacob was a quiet man, dwelling in tents. Isaac loved Esau, because he ate of his game; but Rebekah loved Jacob. Once when Jacob was boiling pottage, Esau came in from the field, and he was famished. And Esau said to Jacob, “Let me eat some of that red pottage, for I am famished!” (Therefore his name was called Edom [“red”].) Jacob said, “First sell me your birthright.” Esau said, “I am about to die; of what use is a birthright to me?” Jacob said, “Swear to me first.” So he swore to him, and sold his birthright to Jacob. Then Jacob gave Esau bread and pottage of lentils, and he ate and drank, and rose and went his way. Thus Esau despised his birthright.

Later, through an ingenious arrangement devised by his mother, Jacob instead of Esau the firstborn receives the blind Isaac’s blessing (Gen. 27:1–40).

Obviously, the story on its literal level has enormous historical importance, for Jacob is the third and last of the great founding Patriarchs of Israel, the distant forefathers of Jesus.

In keeping with the multiple levels of meaning found in the Word of God, however, the story can be read also as an allegory. Rebekah is a figure of the Virgin Mary, Jacob of the predestined, Esau of the reprobate. Rebekah foreshadows the woman whose perfect faith will fulfill the promise made to Abraham, Jacob those who will choose the narrow path that leads to life, and Esau those who follow the broad path of destruction.

We are told of Esau that he was a skilful hunter and a man of the field, while Jacob was a quiet man who dwelt in tents. Esau, who not only spent his days away from his mother and from his home, but even sold his birthright for a bowl of stew, symbolizes the carnal man, the old Adam. Yielding to passion and the life of the senses, he would relinquish a heavenly inheritance to satisfy immediate urges.

Jacob, the peaceful son who remains at home in the tents — the word could also be translated “tabernacles” — symbolizes the spiritual man “hid with Christ in God” (Col. 3:3), the new creation, the risen Adam (cf. 1 Cor. 15). Jacob’s life exemplifies the first verse of Psalm 62: “For God alone my soul waits in silence,” the refrain in a prayer stressing the importance of waiting, a form of receptivity, and silence, which is spiritual openness. Jacob could cry out with the sons of Korah: “How lovely is thy dwelling place, O Lord of hosts! My soul longs, yea, faints for the courts of the Lord; my heart and flesh sing for joy to the living God” (Ps. 84:1–2). Recall that the Ark of the Covenant was reserved in a tent wherever the Israelites erected camp. Jacob, who dwells in the tent of devotion and dutifulness, is likewise a bearer of the covenant, an ark of faith whose example, like that of all the saints, accompanies us in the pilgrimage of this life. Jacob is characterized by complete dependence on and obedience to his mother Rebekah (Gen. 27:5–14), who intercedes for him as our mother Mary intercedes for us, obtaining the blessings of providence for the soul devoted to her.

Shortly after receiving his father’s blessing, Jacob, obedient to his parents, leaves the land, thwarting Esau’s design to kill him (Gen. 27:41–45). We know that Cain murdered Abel because the latter’s sacrifice was more pleasing to the heavenly Father than Cain’s own (Gen. 4:1–16). In like manner, Esau’s “savory food” was rejected by Isaac because Jacob’s food, which had been prepared by Rebekah in the way most pleasing to the father, won for him the blessing first.

Much more could be said about this story, but its importance for us lies chiefly in the contrast between the two sons. Jacob is a man of recollection and service, devoted to his mother and ready to listen to her. He is neither attached to the world nor enslaved to his passions. In short, he prefigures a servant of Mary who enjoys “the glorious liberty of the children of God” (Rom. 8:21) and strives in all things to imitate and obey his heavenly Mother. In this way the devout servant of Our Lady will overcome the world’s glittering attractions, receive spiritual blessings, and escape safely from this vale of tears. Esau, on the other hand, is “a man of the field,” of diversions that remove him far from the source of blessing, which is his home, the hearth of Isaac. He is driven by gluttony when he sells his birthright for food, resentment when he discovers his brother’s reception of the blessing, and hatred when later on he desires to murder him. Anyone who chooses the broad path of careless pleasure will be like Esau, finding to his sorrow how impoverished his life will be.

Because Esau is the image of self-will and Jacob of obedience, their destinies match their character and fulfill the prophecy made to Rebekah (Gen. 25:23). Isaac blesses the younger — “May God give you of the dew of heaven” — but to the elder he declares: “your dwelling shall be away from the dew of heaven on high” (Gen. 27:39). Isaiah uses the metaphor of rain, and Zechariah the metaphor of dew, to prophesy the coming of the Savior (Is. 45:8; Zech. 8:9–13), and the manna that nourished the Hebrews in their wandering — a symbol of the Holy Eucharist that sustains Christians during their pilgrimage through the desert of life — fell from the sky like dew and covered the earth (Ex. 16:13ff.). Thus, Jacob’s blessing contains the distant promise of redemption and sanctification, whereas Esau’s curse signifies the fate of those who will not submit to the yoke of Christ.

As followers of Christ, we are the symbolic descendents of Jacob, not of Esau. Our baptism compels us not only to heed the heavenly Father, but also to heed the great Mother of God, whom the Father created in His eternal plan to be the mediatrix of grace, sub et cum Christo, subordinate to and in union with Christ the one Mediator between God and man. Just as there is no salvation outside belonging to the Catholic Church, the immaculate Bride of Christ, so there is no communication of divine grace without the intercession of the Virgin Mary, who acts as the channel of God’s gifts. “So full of grace was the Blessed Virgin,” writes St. Thomas Aquinas, “that it overflows [from her] onto all mankind. It is, indeed, a great thing that any one saint has so much grace that it is conducive to the salvation of many; but it is most wondrous to have so much grace as to suffice for the salvation of all mankind.”

We will conform to Jacob’s pattern of faith by cleaving to the holy teaching of the apostles, handed down to us through the perennial Magisterium of the Church, and striving to live by the Ten Commandments and the Beatitudes. The model of perfect conformity to God’s will — the secure path for attaining the salvation wrought by the Incarnate Word — is, always and everywhere, the Virgin Mary. As a modern author writes:

This mystery of Incarnation has two aspects: the Word on the one hand and its human receptacle on the other; Christ and the Virgin Mother. To be able to realize this mystery in itself, the soul must be like the Virgin; for just as the sun can be reflected in water only when it is calm, so the soul can receive Christ only in virginal purity, in original simplicity, and not in sin, which is turmoil and unbalance.