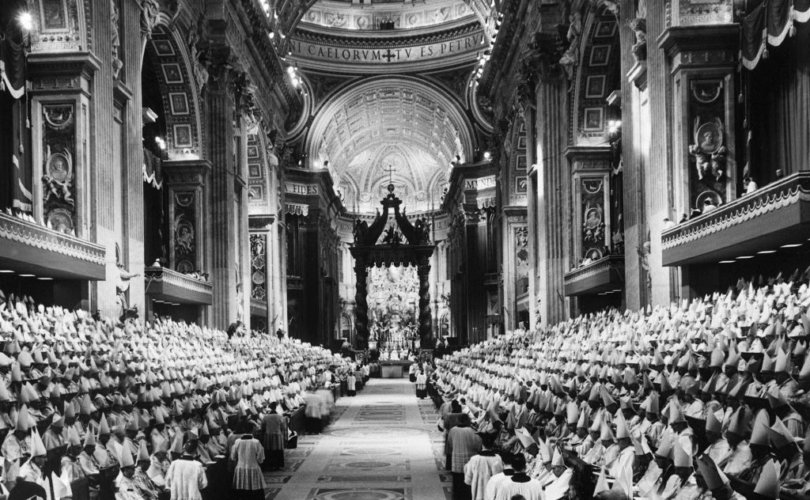 December 4, 2018 (LifeSiteNews) – Today is the 55th anniversary of the promulgation of the Second Vatican Council’s Constitution on the Sacred Liturgy, Sacrosanctum Concilium, which took place on December 4, 1963. It is a cause for amazement just how much nonsense people have attributed to it, how much harm they have justified by airy appeals to its supposed requirements.

Today, there are few who could tell you accurately what Vatican II actually did say about the liturgy—and more importantly, what it did not say. It may be helpful, therefore, to offer a brief overview of the most salient features of the Council’s teaching on the liturgy.

The introduction of Sacrosanctum Concilium exhibits a mystical, contemplative, symbolic vision of liturgy. The remainder enunciates two controlling principles for renewal: first, “Mother Church earnestly desires that all the faithful should be led to that full, conscious, and active participation (actuosa participatio) in liturgical celebrations which is demanded by the very nature of the liturgy” (§14); second, “there must be no innovations unless the good of the Church genuinely and certainly requires them; and care must be taken that any new forms adopted should in some way grow organically from forms already existing” (§23).

In a 1998 address, John Paul II explained the meaning of the first principle:

Active participation certainly means that, in gesture, word, song, and service, all the members of the community take part in an act of worship, which is anything but inert or passive. Yet active participation does not preclude the active passivity of silence, stillness, and listening: indeed, it demands it. … In a culture which neither favors nor fosters meditative quiet, the art of interior listening is learned only with difficulty. Here we see how the liturgy, though it must always be properly inculturated, must also be countercultural.

As for the second principle, the Constitution generally models the modesty it recommends. It brings forward various proposals, yet there is a surprising absence of the very things people most often associate with Vatican II.

Thus, the Council never said that Mass should cease to be in Latin and should only be in the vernacular. The Constitution reaffirmed that the fixed parts of the Mass would continue to be in Latin, the very language of the Roman Rite, but gave permission to vernacularize some parts, such as the readings and the general intercessions (§36; cf. §101). After stating that the people’s language may be used for some parts, the Council added: “Steps should be taken so that the faithful may also be able to say or to sing together in Latin those parts of the Ordinary of the Mass which pertain to them” (§54). Latin remains, to this day, the official language of the Roman Catholic Church and of her liturgy. It is surprising, to say the least, that the aforementioned desiderata of Vatican II are only rarely achieved.

The Council never said that Gregorian chant should be set aside in favor of new songs. On the contrary, the Council acknowledged Gregorian chant as “specially suited to the Roman liturgy” and deserving “foremost place” (principum locum) in the celebration of Mass, along with the great musical compositions of our heritage (§114–§117). New songs could be added as long as they suited the liturgy—which most of the new songs after the Council didn’t and still don’t.

The Council breathed not a word about the priest “facing the people” over a table. The Council assumed that Mass would continue to be offered at an altar by a priest facing eastwards, so that priest and people were together aligned towards the East, symbol of the Christ who is to come—the universal custom of all liturgical rites, Eastern and Western, from the beginning. In fact, the rubrics of the Missal promulgated by Pope Paul VI presuppose that the priest is facing eastwards.

The Council never dictated that tabernacles be moved from the center of the church, that sanctuaries be “reordered,” or that altar rails be removed. It said nothing about receiving communion in the hand while standing. It assumed that communion under both species would continue to be of rare occurrence among the non-ordained (cf. §55); extraordinary ministers of holy communion are nowhere mentioned. Lastly, the Council did not downplay or discourage traditional practices of piety such as Eucharistic adoration and Marian devotions.

Consider how Pope John Paul II, in a 2001 address, explained the essence of the Mass:

The celebration of the Liturgy is an act of the virtue of religion that, consistent with its nature, must be characterized by a profound sense of the sacred. In this, man and the entire community must be aware of being, in a special way, in the presence of Him who is thrice-holy and transcendent. Consequently, the attitude of imploring cannot but be permeated by reverence and by the sense of awe that comes from knowing that one is in the presence of the majesty of God. … [The Mass] has, as its primary aim, to present to the Divine Majesty the living, pure, and holy sacrifice offered on Calvary once and for all by the Lord Jesus, who is present each time the Church celebrates Holy Mass, and to express the worship due to God in spirit and truth.

Anyone who attends a Catholic liturgy ought to be able to see, hear, and internalize the attitude and the aim of which the late Holy Father speaks. Pope Benedict XVI taught us, in word and in deed, the very same lessons. Joseph Cardinal Ratzinger wrote many years ago:

In the history of the postconciliar period, the Constitution on the Liturgy was certainly no longer understood from the viewpoint of the basic primacy of adoration, but rather as a recipe book of what we can do with the liturgy. In the meantime, the fact that the liturgy is actually ‘made’ for God and not for ourselves seems to have escaped the minds of those who are busy pondering how to give the liturgy an ever more attractive and communicable shape, actively involving an ever greater number of people. However, the more we make it for ourselves, the less attractive it is, because everyone perceives clearly that the essential focus on God has increasingly been lost.

Thanks to many acts and documents of Benedict XVI, above all Summorum Pontificum, the future of Catholic liturgy looks bright again—if only we will trust and embrace the age-old tradition of the Church. This treasury of wisdom and beauty is far more valuable than the wares of the so-called experts who set up their trade in the temple. When the Lord in His mercy wills it, He will prepare a whip of cords and drive them out.

The Christian people who have suffered so much from the “spirit of Vatican II” deserve to know what Vatican II really taught and did not teach about the liturgy—what it asked for, and what it did not ask for. Sacrosanctum Concilium will not come off looking blameless, but it cannot be blamed for the most obviously disastrous things that happened to the liturgy in the mid- to late 1960s. For this, the blame lies largely elsewhere, as a new biography shows with utmost clarity.