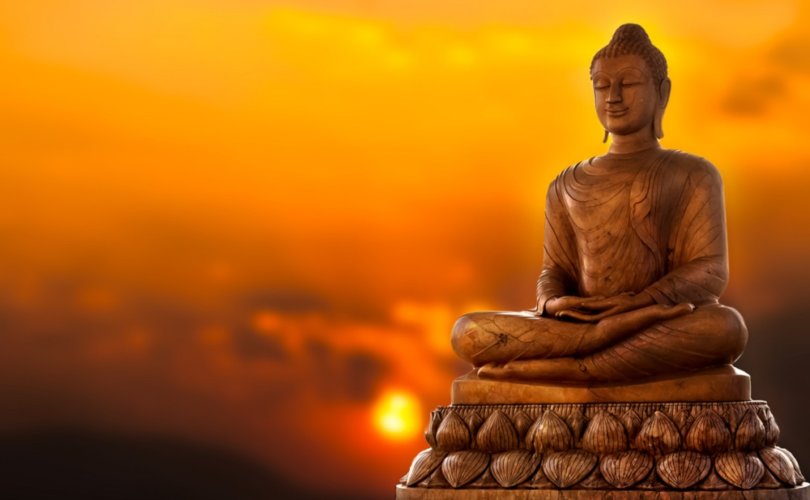 March 24, 2020 (LifeSiteNews) — On November 21, 2019, Pope Francis met with the Buddhist “Supreme Patriarch” at the Wat Ratchabophit Sathit Maha Simaram Temple in Bangkok and spoke vaguely of how “religions” are “beacons of hope” and “promoters and guarantors of fraternity.” He neglected to mention the basic truth that there is common brotherhood only in a common Father — the Father revealed in His Son Jesus Christ: “No one knoweth the Son, but the Father: neither doth any one know the Father, but the Son, and he to whom it shall please the Son to reveal him” (Mt. 11:27).

Admittedly, it’s not necessary, and not even humanly possible, to speak every truth in every situation. Yet the salvation brought by Christ is not just one truth among many, but the central truth of our existence — the difference between a life lived well and a life lived in vain. One wonders what a pope is doing paying a personal visit to a Buddhist leader and requesting his blessing, as if he has something to give that Christ and His Church do not already have in a more perfect way, or as if there were no danger at all in such intercourse between fundamentally incompatible religions.

When Pope Francis next travels such a great distance, he might consider imitating his namesake, St. Francis of Assisi, who walked straight into the Muslim camp and preached the Gospel to convert the sultan. But ardent believers are few and far between in this age of polite chitchat. The Lord who saith “I will shake the heavens and the earth” has been replaced by the handshake and the photo-op.

Thomas Merton toward the end of his career, until it was short-circuited in Bangkok, was interested in the question of what Buddhists and Christians — and more particularly, Buddhist and Christian monasticism — have in common. There is, after all, as St. Thomas Aquinas points out, some common ground between any two serious positions; it is just this common ground that often furnishes a foothold for the evangelist to begin making his case. It is well that we ask ourselves what the commonality consists in, and whether it hides a more profound opposition that deserves to be drawn out, so that we may avoid the error of seeing Christianity and Buddhism as two analogous paths toward the Ultimate and the Infinite, toward Personal Realization (or however someone in the Vatican Press Office might phrase it).

In order to accomplish this, we must look at the problem of desire, its effect of restlessness, the remedy of asceticism, and the result of peace.

St. Thomas teaches that common goods bring us together, while private goods drive us apart. Animals fight chiefly about goods that cannot be shared — namely food and sex (Summa contra gentiles 3.124; Summa theologiae 1.81.2). This is true of human beings, too, insofar as they live like animals: their concern is to get as much enjoyment, or as many bodily goods, as they can get, and since these goods are unable to be had by many at once and in the same respect, and since there is nearly always a scarcity of at least some goods at any given time and place, this leads to conflict, division, resentment, injustice, and violence. It is, in short, the logic of raw capitalism and of Marxism alike, for in both systems men must find ways to vent their mounting frustration with the inability to gather and enjoy bodily goods in proportion to the “infinity of desire.”

The remedy for this diseased condition is twofold: negatively, a mortification of desire, by which desire is restored to a healthy realism and moderation; positively, a yearning for and an increasing possession of spiritual goods, which are inherently limitless, ever available, and ever abundant and cause charity, peace, joy, and the other fruits of the Spirit mentioned by St. Paul in Galatians. The medieval mystic Meister Eckhart notes: “As far as you are in God, thus far you are at peace, and as far as you are outside God, thus far you are outside peace” (Talks of Instruction, 23).

It is here that we first see what looks like a correspondence between Christianity and Buddhism. Classic Christian spirituality emphasizes mortification of the flesh in order to achieve self-mastery and illumination; in like manner, Buddhism seeks to bring the restless wheels of desire to a standstill in order to achieve enlightenment.

In spite of his Assisi escapades, Pope John Paul II reminded us in his 1994 blockbuster Crossing the Threshold of Hope (1994) that the contrast between the two religions is far greater than the likeness:

The “enlightenment” experienced by Buddha comes down to the conviction that the world is bad, that it is the source of evil and of suffering for man. To liberate oneself from this evil, one must free oneself from this world, necessitating a break with the ties that join us to external reality ― ties existing in our human nature, in our psyche, in our bodies. The more we are liberated from these ties, the more we become indifferent to what is in the world, and the more we are freed from suffering, from the evil that has its source in the world.

Do we draw near to God in this way? This is not mentioned in the “enlightenment” conveyed by Buddha. Buddhism is in large measure an “atheistic” system. We do not free ourselves from evil through the good which comes from God; we liberate ourselves only through detachment from the world, which is bad. The fullness of such a detachment is not union with God, but what is called nirvana, a state of perfect indifference with regard to the world. To save oneself means, above all, to free oneself from evil by becoming indifferent to the world, which is the source of evil. This is the culmination of the spiritual process.

For Christians, the “culmination of the spiritual process” is not total detachment, but loving attachment to God — a personal God whom we can know and love, without being absorbed into Him and losing our identity, like a drop dissolved into the ocean. We do not lose all desire; we refine and intensify desire for what is really worth desiring.

Next week, I will resume with John Paul II’s intriguing assertion that the Carmelites begin where the Buddha ends.