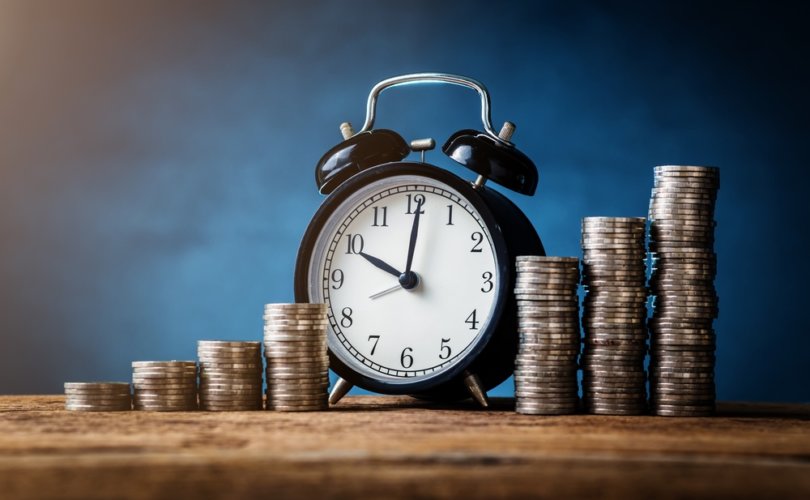 January 8, 2019 (LifeSiteNews) – Many Christians, Catholic and Protestant, are already accustomed to tithing (take 10 percent of) their incomes for the Lord. Once upon a time this took the simple form of giving 10 percent to the local parish or church. Today, with so much evidence of money being channeled either to organizations that do not adhere to Church teaching or simply to payoffs for mishandling of abuse, laity are understandably skeptical about earmarking their tithe for such dubious purposes. Instead, they will give to charities that unambiguously follow Church teaching and have a record of good and scandal-free management.

But have you ever asked yourself what it would look like if we tithed the commodity that is really most precious to us, far more precious than any gold or silver – namely, our time? Though some glibly say “time = money,” in fact time is far more important than money. The real equation goes like this: “time = life.” What we spend our time on, we spend our life on. Each moment God gives to us has to be spent on something, and once it is spent, it cannot be taken back. Even if most of our time will be spent on such mundane activities as sleeping, working, caring for our dependents, eating, washing, and driving, we also know, from Scripture and from Catholic Tradition, that we owe time to God each and every day – indeed, the best time should be given to Him. By this, I mean the first portion of each day, as well as the last moments before we go to bed.

Now, if God is the source of our very life, if He is our happiness, the very end we are striving for during our earthly pilgrimage, and the Judge who will ask us to give an account for “every idle word we speak” (cf. Mt 12:36), it follows that the more time we can spend on God Himself, the better. And what I mean by spending time on God is, quite simply, prayer. Prayer includes the four classic acts of prayer – adoration, contrition, thanksgiving, supplication – as well as meditating on Scripture, doing spiritual reading, and any other activity that has God as its raison d’être. (Put it this way: any activity that would make no sense if God did not exist is an activity that is about God; any activity that you would do whether God existed or not is a worldly activity.)

If we decided to take the next big step beyond tithing our money, namely, tithing our time – or, to be fair to human nature, our time awake – what would it look like? Well, if there are 24 hours in a day, and we assume 8 hours for a night’s sleep, a tithe of the remaining 16 hours would be 1.6 hours, or 96 minutes. That sounds like a great deal more time than most people, even Christians who pride themselves on being “practicing Christians,” spend on daily prayer.

However, if we look to former centuries, when Christian practice was much stronger, we see something exactly like this tithe expected of both Catholics and Protestants. Since I am much more familiar with the Catholic side, I will focus on that.

A Catholic who assists at a daily Mass lasting thirty minutes, with ten minutes of thanksgiving after; who prays a Rosary lasting about twenty minutes; and who spends about a half-hour at one or two other points in the day doing lectio divina, spiritual reading, mental prayer, or some part of the Divine Office (such as Prime or Compline) – such a Catholic will have given to the Lord 90 minutes of his day, which is almost exactly a tithe of his waking hours. It can indeed be done, and it should be done. The fruits are apparent to those who try it; and these are fruits that benefit far more than the one undertaking this prayer regimen.

It goes without saying that, short of receiving an especially powerful grace that prompts us all at once to embrace such a program in full, it is more prudent to build up to this level, putting in place one good habit at a time, rather than trying to do too much at the start and falling flat on our faces. We can start with daily Mass, daily Rosary, or daily Divine Office, and once this is solidly established, go on to add another commitment, until we are leavening the day with prayer.

To the obvious objection “But I’m too busy to devote so much time to prayer – I’ve got work to do, and my family obligations,” etc., the response is twofold. First, we need God’s grace more than God needs our works, and our works will not be fruitful without turning to Him regularly. It’s said that whenever a Missionary of Charity would tell Mother Teresa that she was “too busy” to do a daily Holy Hour, Mother would assign her a second daily Holy Hour, with the remark: “The one who has more responsibilities has greater need for prayer, not less.” Second, to paraphrase the Marian Catechist Apostolate: “If your work is so much that you do not have time for prayer and meditation, then you have to cut back your work. There is no other way.” I would add that it is particularly important that mothers not neglect their own spiritual needs; their husbands should offer to take the children from time to time, or their older children should be placed in charge for a certain time, so that mothers may give the Lord His due and give their own souls rest and refreshment in Him.

Religious – monks and nuns who are consecrated by their state to public liturgical prayer throughout the day and to a life of recollection and mortification – ought to be giving much more than a tithe of their waking hours, just as they make a vow of poverty to give up all their possessions and not just 10 percent of their income. The goal of the religious is to pray without ceasing, as St. Paul urges us all to try to do to the best of our ability (cf. 1 Thes 5:17); in order to live a life that is given over totally to the activity that is most proper to the baptized, the religious cuts away everything that would distract or deter him or her from pursuing it. In this life we cannot perfectly surmount the daily grind, but we can simplify more and more so as to open up space and time in our day for God. This is the total offering of self that the monk, nun, sister, brother, makes before God and for God. And this is why the religious life is the very heart of the Church: it is the guarantee that somewhere, in some people, the absolute primacy of God and of His Kingdom are being realized here and now, the sign that some Christians are staking everything on the divine promises and thus fulfilling the command of the Lord: “Seek first the Kingdom of God and His righteousness” (Mt 6:33).

For ultimately the goal of all tithing is to habituate ourselves to a spirit of generosity, and to prepare ourselves for the consecrated life of heaven, when God will be “all in all” (cf. 1 Cor 15:28). At the time of my death, in my particular judgment, I will either be ready and eager to give myself wholly to Him in the ecstasy of heaven, or I will flee from Him into the cold and dark pit of selfishness in which hell consists. If we do not train ourselves in this life to give, to give a lot, to give until it hurts, to give until we love to give, we should not expect an easy transition to an afterlife of adoring abandonment in which we “have nothing and yet possess all” (cf. 2 Cor 6:10).