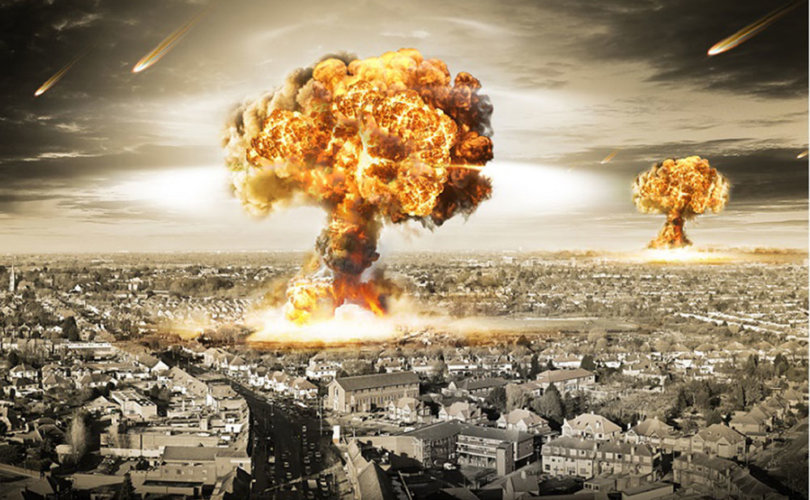 August 24, 2016 (LifeSiteNews) — Under Ben Johnson’s blog post yesterday, a powerful reader comment explained why the real abortion numbers indicate a far worse nuclear bombs analogy than that stated by Fr. Pavone of Priests for Life. Of course, Fr. Pavone was trying to be tactful in understating the horrifying reality.

Dennis Howard, of Movement for a Better America, makes a strong case that the total number of abortions in the United States alone (never mind the hundreds of millions in other nations) can be compared to all 94 largest U.S. cities being “nuked” – a truly mind-boggling nightmare come true.  The pro-aborts were enraged over Fr. Pavone’s milder statement of, “It’s like several atomic bombs have already gone off on our own soil”.

Most Americans, and sadly a large majority of the Christian leaders in the United States, still have no comprehension of how truly horrific and diabolical has been the abortion holocaust. They carry on day after day as though it has not and could not have really been happening or be as threatening to our civilization as it certainly is.

To them, abortion and its many related evils are indicated, more by the leaders' actions and visible daily priorities than anything else. They end up giving the impression that these are simply be a few of many other important issues such as unemployment, lack of affordable health care for everyone, poverty, climate change, immigration, and other “social justice” matters that they say we must consider during elections.

Sure, they put abortion at the top of the list and many do explain the serious Christian teaching against it. The real world effect, however, is that it gets buried in the minds of most readers and hearers, within the laundry list of the many other issues also emphasized.

Hence, a majority of Catholics keep voting for Barack Obama, Hillary Clinton and many other anti-life candidates with totally evil agendas. It is especially the influential, comfortable Catholics who are ensuring the continuation of the culture of death. And no wonder, considering the excuse provided them by the dreadfully inadequate direction and example from their religious leaders (with notable exceptions).

If a foreign power nuked 94 US cities tomorrow, would the US bishops and other Christian leaders still surviving respond in a way that those deaths could be interpreted to be just one of many issues Americans must consider in determining their actions and priorities? Of course not. So, that tells you most of these leaders, in practice, actually do not consider every abortion to be the murder of an innocent human being. They do not, by their daily actions, give an impression they believe this is historically the greatest mass slaughter of innocents that there has ever been.

They are in real-world practice like atheists who do not consider every conceived human to have a soul and a humanity that must be protected at great cost if necessary. Otherwise, they would be giving an example of penitential sackcloth and ashes (which we all should also do), pleading for God's forgiveness for allowing this evil to continue so long, and leading the nation to a great, necessary spiritual re-awakening.

But, they are not – even many of the best.

And that is a large part of the reason that we are where we are today.

Here at Movement for a Better America, we've been using the A-bomb comparison for over 20 years, including a video done in 1996 called “The Abortion Bomb.” But obviously, too few people were listening.

Unfortunately, NRLC's number for the abortion toll only counts abortions since Roe v. Wade. In fact, there were 2 million abortions even before Roe, starting when abortion was decriminalized in Colorado in 1967, California in 1968, and New York in 1970. Both California and New York attracted huge numbers of women from other states during this pre-Roe period.

Currently, we estimate the toll at 59.6 million — which is equal to the population of our 94 largest cities. It's as if all 94 cities were nuked.

In World War II, we had 16 million men and women in uniform, but our casualty rate for battle deaths was just 1.8%. By comparison, we've aborted 30% of our entire younger generation — Gen X, Y and Z. If that isn't a war against the young, what would the left like to call it?

A conservative estimate of the economic cost is in the $54 trillion range, using lost GDP per capita as the measure, counted cumulatively since the abortion epidemic began. If we were to use the same guidelines used by the EPA or the FDA on the value of each human life, the estimated loss would be more like $549 trillion to as high as $774 trillion.

And yet our government is funding Planned Parenthood to the tune of $550 million a year to kill babies. From an economic viewpoint, as well as a moral one, that's insane. Spending $500 to end a full life that the FDA or the EPA would value at $8 or $9 million each is indefensible.

Making this even more significant is the “echo effect” of abortion. Every abortion not only means the loss of one life, but the future loss of all the children, grandchildren, and great grandchildren that person would have had. There is no way to change that. So the real toll is not just 59.6 million, but many times that number in terms of total future population.

The Negative Population Growth lobby understands this very well, and are confident they will achieve their goal of reducing U.S.population to 150 million or so in the medium to long term.

What they ignore is that 30 leading Muslim countries are currently growing by 1.9% a year and, if that continues, will make up half the population of the planet by 2085. It's all right there in the numbers. And the main difference between their growth and our decline is that they don't abort their children and we do. My guess is that our problems with Islamic terrorism have just begun. By 2050, they'll have enough people to cross any border they want..

China is finally becoming aware of this echo effect, but their one-child policy was so extreme that there is no way they can avoid a major population decline over the next 30 to 40 years. Their new policy is too little and too late to change that.

Unless we change dramatically and soon, it's pretty much all over for the industrial West. If you ask me, we've been far too timid in our save-one-baby-at-a-time, niche approach to fighting the abortion battle.