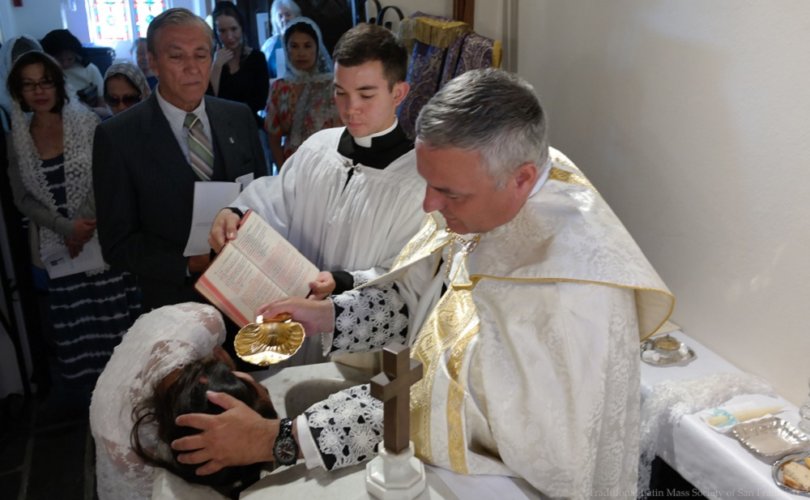 September 8, 2020 (LifeSiteNews) — Fr. Matthew Hood, the Detroit priest who discovered in early August that he had been invalidly baptized — that is, had not been baptized at all, and therefore had to receive all his sacraments over again (with the fallout that resulted for other people who depended on his ministry) — wrote a gentle and sincere article about his situation that was published at First Things on September 3.

Several sentences in his article leapt out at me; I shall comment on them a few at a time.

Throughout the world, with rare exceptions, the sacraments are celebrated validly. If we have clear and irrefutable evidence to the contrary, then we can act to correct the situation swiftly. But the faithful should not be anxious.

“Throughout the world, with rare exceptions, the sacraments are celebrated validly.” To be able to say this in 2020 is indirectly to admit the colossal failure of the liturgical reform to live up to the vision (some would say utopian) that the original Liturgical Movement had, of a Church joyfully and knowledgeably drawing water from the sacramental springs of salvation as bequeathed to us in our Catholic tradition. The reformers felt themselves free to do nearly anything, with rare exceptions, because they had already in their minds equated the “essence” of sacraments with discrete formulas that guaranteed validity — and all else was up for grabs. This neoscholastic reductionism is incapable of seeing the beauty of the whole, the intangible life that animates the organic body; this reductionism murders to dissect, confident that it will find the golden egg once the goose is slaughtered.

This is the low bar to which we have been reduced: most sacraments are valid. I am reminded (again) of C.S. Lewis’s observation that if you seek the higher good, you’ll get the lower good “thrown in,” but if you seek the lower good apart from a higher good, you won’t even obtain the lower one. In the case of the traditional Latin sacramental rites, in which every word and motion is scripted by the rubrics and a minister is like a train engine that stays inflexibly on its tracks as it makes for the station, we obtain not only the bare minimum, validity, but something more than that, opening like a flower: the likelihood of dignity, the preconditions of beauty, the reassurance of order.

If anyone should be anxious, it should be the ministers of the Church, that they renew their efforts to celebrate the rites of the Church faithfully. … The beautiful, powerful gift of the sacraments is obscured when we replace the voice of Christ with our own voices. As “stewards of the mysteries of God” we are proven “trustworthy” when we faithfully administer the sacraments according to the law of Christ and his Church by allowing Christ to speak through us (cf. 1 Cor. 4:2).

Were the liturgical reformers of the 1960s who had been ordained to celebrate the rites faithfully — were they faithful to the immense treasury bestowed upon them, handed down to them by so many generations of believers? Were they worthy of their trust, letting Christ and His Church speak through them? Or did they dare to think themselves wiser than 500, 1,000, 1,500 years of Catholic tradition or even more, stretching back to the temple worship of the Jews — wiser not just on one or two minor points, which might have been granted, but on the shape and substance of the Church’s rites from top to bottom, as they systematically and thoroughly altered every sacrament and sacramental, every office of prayer and penance, everything connected with divine worship?

Last time I checked, this kind of “daring” was par for the course in the liturgical reform. The reform, you might say, was defined by audacity on every level, riding the momentum of an ecumaniacal Council and paid for by the slush fund of papal authority, accumulated over centuries and blown in a decade.

The liturgical reformers changed the sacramental formula for the consecration of the wine by displacing the mysterium fidei — not making the consecration invalid, but still tampering with something that had never been changed in the entire history of the Western Church.

They removed many verses of the Psalms from the Breviary that had always been sung by the Church.

They removed passages of Scripture that used to be read at Mass for as many centuries as we have records, and when they included more of Scripture, they navigated around particular verses they didn’t want to have in there.

The sacramental formulas of almost every sacrament were modified by Paul VI. Did they have to be? Did anyone ever question their legitimacy? Were the ranks of lower clergy and the squadrons of Catholic Action clamoring for urgent sacramental reform? No. Paul VI changed them so that (in Fr. Hood’s words) “our own voices are heard” — that is, modern scholarly up-to-date voices, not the voice of Catholic Tradition.

All of this background establishes the context for why Pope Francis felt free to contradict Scripture in Amoris Laetitia and the death penalty change — why he could effectively dissent from the uniqueness and unicity of the Christian religion as a God-willed path of salvation. Neither sacraments nor Scripture are seen as inviolable anymore. That is the legacy of Paul VI’s liturgical reform, and until we confront the root of the problem head-on, we will be fighting a conflagration with squirt guns.

The solution will not be as simple as “better seminary training.” There will have to be, sooner or later, a wholesale restoration of what we were doing before, successfully, organically, from the beginning of the Church on through the centuries. It will not, it cannot be, something cobbled together by a Vatican committee and atomized into as many varieties as there are “worshiping communities.”

The thought process behind making up supposedly more meaningful or more inculturated rituals for local communities is identical to the thought process behind the creation of the Novus Ordo. The step from Annibale Bugnini to Deacon Mark Springer is not as large as might be imagined. One was clever, the other foolish; one had plenty of training but no scruples, while the other plenty of enthusiasm and no training. Yet they are two peas in a pod.